Is it natural, or is it designed?

Posted on January 23, 2008 by skullsinthestars

Creationist quack/hack Ray Comfort has a blog, and he recently argued that the Bible is a science text, and in fact is better than science (h/t Pharyngula). My main response to such drivel is that if the Bible is better than science, than surely Ray, or a more science-minded creationist compatriot, will use the Bible to answer some of the troubling questions about the universe, such as the exact mass of the Higgs boson, the exact nature of dark matter (mass, spin, and relation to ordinary matter, please) or at the very least the grand unification energy at which the fundamental forces all become one and the same.

While we’re waiting for an answer, I was thinking about another creationist canard repeated often: that it is ‘obvious‘ that life is designed, because designed things are so obviously different than natural things.

This argument, while compelling to the fundamentalists, is flawed for one big reason: people have inferred or suspected design numerous times throughout history, only to later be refuted by scientific observation. I thought I’d put together a brief photo-essay of some examples…

It should be noted that I’m only including examples of objects that were mistakenly thought to be designed by non-supernatural entities. If we include supernatural ‘design’ explanations in our list (Vulcan’s hammering at his forge resulting in eruptions), our list becomes even larger.

(Photo from Rising Road Tours.) This amazing collection of basalt columns was officially discovered by the scientific world in 1694, though the Bishop of Derry apparently visited the site 2 years earlier and brought word back. The structure, so regular and ordered in appearance, led to differing theories of its formation, from (unspecified) natural occurrence to construction by (unspecified) prehistoric laborers to legends concerning its construction by Irish Giant Finn McCool (hence the name) as a bridge to Scotland. In fact, it is now well-established that it is volcanic in nature.

The Face on Mars

(Photo from Wikipedia.) This image, taken by Viking I in 1976, bears a striking resemblance to a humanoid face. Numerous people, including apparently a few researchers, became convinced that this face was evidence of a long-lost Martian civilization, and the legend still persists to this day. More recent images taken by a number of orbiting craft and released in 2006 demonstrate that the ‘face’ is simply a trick of light and shadow:

The Canals of Mars (Image again from Wikipedia.) While we’re still ‘on Mars’, it’s worth remembering the so-called Martian canals, which still make occasional appearances in science fiction literature. They were first observed by Italian astronomer Giovanni Schiaparelli in 1877, though it is not clear if he intended to imply man-made waterways. Whatever his intentions, a number of astronomers and many, many faithful believed that these ‘canals’ were artificial waterways constructed by a civilization on Mars. As early as 1903, however, researchers demonstrated with visual experiments that observers tend to ‘connect the dots’ when starting at images through a low-power telescope. In other words, the canals were completely in the imagination of the viewers.

(Image from Best Bahama Vacations.) This underwater feature was discovered in 1968 and, to quote Wikipedia, “consists of approximately one half-mile of limestone blocks, lying in a semi-rectangular pattern, with the blocks themselves appearing to be rectangular in shape.” This regular arrangements of stones has convinced numerous amateur archaeologists that they represent a road on the lost, sunken city of Atlantis! Geologists, however, are in agreement that the stones represent a natural limestone formation. The regular arrangement of the stones is likely due to fracturing along lines of symmetry. (Image of the Vela Pulsar from, again, Wikipedia.) All the previous examples are of static, unmoving objects. Surely natural phenomena couldn’t give the appearance of man-made phenomena such as radio signals? Well, in February of 1968 graduate student Jocelyn Bell detected an unprecedented periodic radio signal coming from a distant spot in the sky, she and her advisor wondered if they had detected a signal from an alien civilization. They dubbed their discovery, tongue-in-cheek, LGM-1 (“Little Green Men 1”). Within a short span of time, however, dozens of additional pulsars were detected. We now know that pulsars are in fact highly magnetized, rapidly rotating neutron stars.

The Fortress of Solitude

(Image from the blog Verum Serum.) Let’s approach our argument from another direction and note that filmmakers occasionally exploit people’s lack of ability to distinguish the natural from the designed. Superman’s Fortress of Solitude is a perfect example. Supposedly the product of advanced Kryptonian technology, note the similarity between the platforms here and the Giant’s Causeway above. Furthermore, the crystals in the fortress are good imitations of naturally-occurring amethyst:

(Image from briolettes.com.) Crystals often look like they were designed by a superior race, though obviously they form completely naturally. (And if you don’t believe me, you can do it yourself.)

One can argue, of course, that all the previous examples are exceedingly simple structures. Natural processes can’t fake complex things like writing, though… can they? 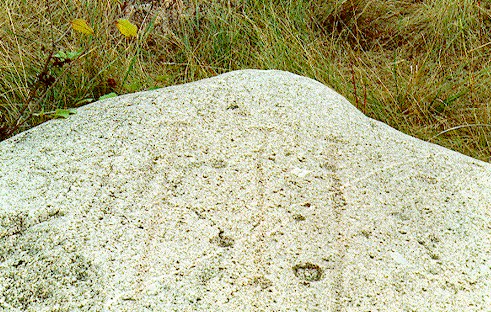 (Image from North Dakota Notes.) The markings on boulders such as these have been interpreted in the past as petroglyphs left by ancient Scandinavian explorers! In reality, though, the markings here were made by rocks, carried by retreating glaciers, scraping across the surface.

It is interesting to note that actual, non-natural petroglyphs exist in North Dakota. Apparently nature is pretty good at ‘faking it’ even when faced with the real thing.

It should also be noted that Fort Ransom is the site of natural mounds and a natural ‘pyramid’ which were both misinterpreted by early visitors as man-made constructions (see the ‘North Dakota Notes’ article above).

I suppose an IDer would argue that none of the above examples are truly ‘complex’ like biological organisms, and therefore don’t count. But what defines complexity? In all of the examples above, people were led to a ‘design’ explanation by an ignorance of the natural processes that could create such objects. Though they didn’t use the same terminology, the argument is essentially the same that the IDers make: these objects are far too complicated and structured to have appeared on their own. But in every case above, an explanation was found that didn’t require intelligence.

In biology, the explanation is known, as well: evolution. We can forgive the mistakes in the examples above, because the natural mechanisms were not understood. But IDers are a different breed, remaining willfully ignorant of a theory that has existed for over a hundred years in order to support their own simplistic view of life.

In any case, I hope the next time you hear an IDer claim that “design is self-evident”, you remember the examples given above.

This entry was posted in ... the Hell?, General science. Bookmark the permalink.