Lost divers shamelessly rip off ‘Lost’ and ‘Land of the Lost’!

Posted on June 8, 2008 by skullsinthestars

Last Thursday, a group of divers went missing on what was supposed to be a routine tour dive in Indonesia. On Saturday, all five were rescued from the island of Rinca near Komodo Island, having spent two days surviving on the abandoned island (a more British-centric description can be found here). They ate raw shellfish while waiting to be rescued, and all are in good condition, apart from some dehydration.

The story gets better, though, as anyone familiar with the native inhabitants of Komodo Island might suspect: they had to fend off a Komodo dragon that was showing a little too much interest in them!

Of course, a Komodo dragon is a serious creature: big, aggressive, and disease-ridden. They are the largest species of lizard, growing to a maximum length of ten feet. There size is attributed to the biological phenomenon known as island gigantism: basically, small islands are usually missing the large predators which would easily hunt and kill large animals.

Their aggression is well-documented. They are cannibalistic, and will eat their own young, given the chance. Young Komodos seek refuge in trees. The only time I’ve seen the late Steve Irwin chased up a tree was when a Komodo caught the scent of blood from a scratch on his leg! There was also the peculiar case, back in 2001, when a Komodo in captivity pretty much took off the big toe of Sharon Stone’s husband.

Getting bitten seems bad enough, but the mouth of the Komodo dragon is filled with virulent bacteria. An animal which survives an initial attack by a Komodo will likely die of infection later. This seems like an interesting case where an evolutionary change favors a group, rather than an individual: it is in the best interests of all the Komodo dragons to have a large supply of dying animals lying around. Even if you don’t eat the animal you bit, there’s likely another dying animal around that another Komodo bit. There is an excellent and very funny discussion of the Komodo dragon in the classic book by Douglas Adams and Mark Carwardine, Last Chance to See, which I highly recommend.

Anyway, back to the divers’ encounter with the Komodo. To quote from a story about the Swedish diver, Helena Nevalainen, on the trip,

“It was big… It tried to have a go at my feet,” she said a day after she and her companions were rescued at the end of a two-day ordeal including more than 30 hours on the dragon-infested deserted island.

Still, the Komodo dragons can’t be all that bad: as evidence, I present a photograph I took of a pair of Komodos at the Rotterdam Zoo about four years ago: 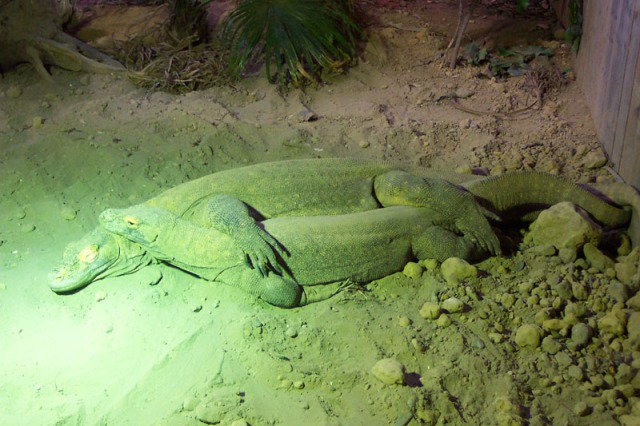 In any case, I’m glad to see that all the divers made it home safely, and that there wasn’t a redshirt among them! In honor of their rescue, I present the following video clip, which seems to summarize what they went through quite succinctly (with a bluegrass sound),

This entry was posted in Animals, Science news. Bookmark the permalink.

1 Response to Lost divers shamelessly rip off ‘Lost’ and ‘Land of the Lost’!