Posted on February 6, 2009 by skullsinthestars

There was one other event at the rapidly-receding-into-the-past ScienceOnline 09 that I wanted to blog about: my visit to the Duke Lemur Center!  Friday was a day for local trips to areas of interest, and I opted to go with a small group (including Brian) to the Lemur Center.

The Center is funded by the National Science Foundation and has a mission to “to promote research and understanding of prosimians and their natural habitat as a means of advancing the frontiers of knowledge, to contribute to the educational development of future leaders in international scholarship and conservation and to enhance the human condition by stimulating intellectual growth and sustaining global biodiversity.”  It is a relatively low-key (but awesome) facility with a strong emphasis on research and conservation.  Visitors are welcome but must schedule a guided tour — the directions to the Center are not even publicly displayed on their website!

We were not at the Center at the optimal time.  In the summer, the animals have free run of a open-air forest, but in the winter are kept mostly indoors.  The day of our visit it was particularly cold, and the animals had to be coaxed to even come near the open windows to say ‘hello’ by our excellent guides (whose names, alas, escape me).

Nevertheless, I’ve been a huge fan of lemurs for years, so I found the visit a delight.  Below the fold I share a few of my pics from the Center and some of my older lemur photos — and videos!

If you aren’t familiar with lemurs, you really should be: they are members of a group of primates known as prosimians that are native only to the island of Madagascar.  The long-time isolation of the island resulted in the evolution of many unique species there, among them the lemurs.  They are for the most part not much larger than a large housecat, but there are a few species that are genuinely tiny, such as the gray mouse lemur. There are numerous species of wonderful variety, some of them quite rare, and many of them are represented at the Lemur Center.

We started our tour by visiting with the red-bellied lemurs: 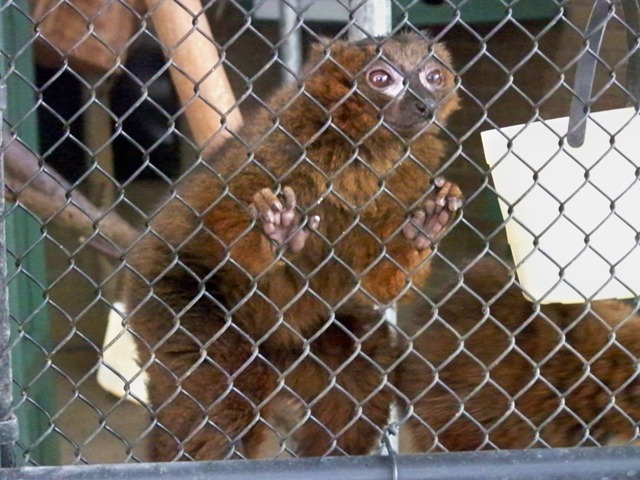 This fellow had the cutest habit of leaving his tongue out while waiting for a snack; while it isn’t the greatest picture, I had to share it: 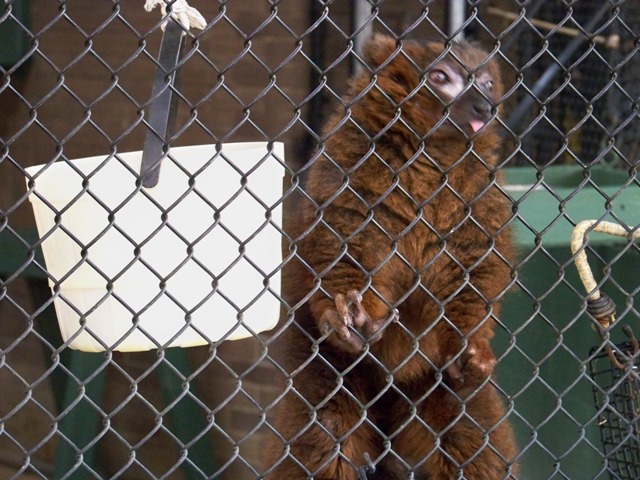 Next we visited the ever-popular ringtailed lemurs: 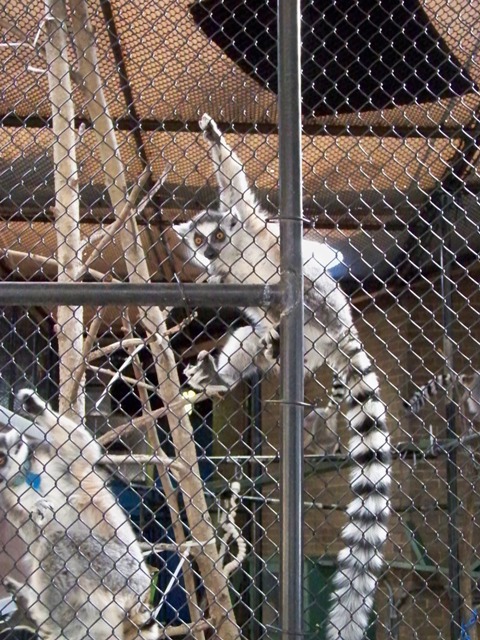 Another favorite, which I was very familiar with, are the red ruffed lemurs.  This one demonstrated that they can get their food just as easily while inverted:

There were many other species, but I’m still not used to my camera and didn’t get great pictures of many of them.  I did get a picture of one I hadn’t seen before: the Coquerel’s Sifaka:

This one is almost surreal, as it looks to be a cross between a muppet and a character from a Miyazaki film!

It’s worth noting that the Lemur Center has an excellent gift shop, which is also online, and a blog.  One can ‘adopt’ a lemur and help support the center through the gift shop, as well.

While I was doing postdoctoral work in Amsterdam, I spent a lot of time hanging out at Amsterdam’s Artis Zoo, which actually has a pretty large collection of lemurs.  The exhibits are small, due to the compact nature of the city.  This is relatively bad for the lemurs, but good for a fan like myself.  While there, I got a lot of pics of lemurs, and thought I’d share a few.  First, a napping ringtail:

The ringtails at Artis had one of the cutest habits: on chilly days, they would huddle together until the sun came out, at which point they spread their arms and let their bellies soak up the rays:

Apparently things weren’t too bad for the lemurs at Artis; while I was living in The Netherlands, a number of lemur babies were born, including a pair of adorable red ruffed lemurs.  The autofocus on my camera preferred to focus on the glass instead of the animals, but I got a few decent shots.  First, a picture of one chilling on a branch:

At mealtime, they got together with Mom for a meal: 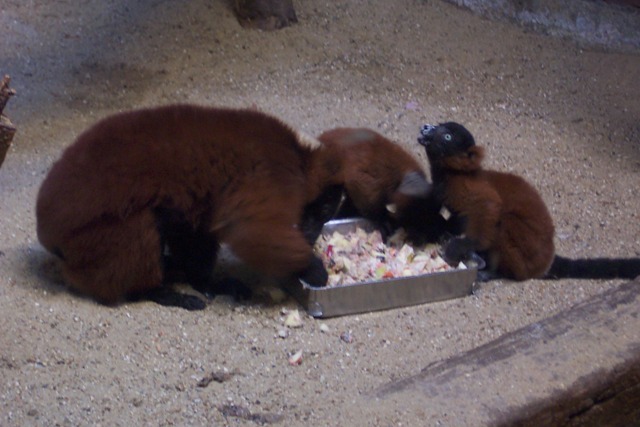 Finally, here’s a shot of the two babies wondering why the strange man keeps wandering in front of their cage taking pictures of them:

I also got some videos of the lemur kids in action. The first one is one of the kids alone:

The second one is a whole group of young lemurs doing, well, what they do:

The Lemur Center is a wonderful place and a real treat to visit.  I’m looking forward to taking (dragging?) the fiancée back there in the summer for a walk amongst the lemurs.   I encourage others to make an appointment to see the lemurs (and spend lots of money in their gift shop!).

This entry was posted in Animals. Bookmark the permalink.