Posted on August 7, 2009 by skullsinthestars

A wonderful case in point: researchers have recently shown that rooks (a relative of crows) can solve problems on a level that is nothing short of astonishing (h/t my postdoc advisor, from BBC News):

One of Aesop’s fables may have been based on fact, scientists report.

In the tale, written more than 2,000 years ago, a crow uses stones to raise the water level in a pitcher so it can reach the liquid to quench its thirst.

Now a study published in Current Biology reveals that rooks, a relative of crows, do just the same when presented with a similar situation.

The team says the study shows rooks are innovative tool-users, even though they do not use tools in the wild.

Another paper, published in the journal Plos One, shows that New Caledonian crows – which like rooks, are a member of the corvid group, along with ravens, jackdaws, magpies and jays – can use three tools in succession to reach a treat.

There are accompanying videos on the BBC site, which are quite spectacular.  Stories of ravens solving problems and using tools are not new, but this story is quite amazing because of the indirect nature of the solution and the connections which the rook must make to arrive at that solution.

The cognitive abilities of birds are quite frightening!  The wife and I are planning ahead and trying to placate them with lots of bird feeders in the backyard on the off chance they decide to take over.

Also via my postdoc advisor is this charming little anecdote from Holland.  In eastern Holland is a fascinating nature park called Apenheul (“ape hill”), in which the smaller primates are allowed to roam free and interact with the visitors1.  The article from Het Parool is in Dutch, so I will quote my former advisor’s email:

Among the different brands of monkeys that are allowed to roam free there are so-called berber monkeys. The gorillas of course aren’t. But they get fed at certain hours, and one of those berbers likes to watch that and simply takes a seat among the other spectators. After the feeding show he or she simply heads back to his part of the zoo.

The picture from Het Parool is rather priceless: 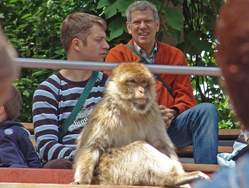 1 I had pictures from Apenheul, but I foolishly checked my camera on the return flight from The Netherlands and had my memory card swiped from it.

This entry was posted in Animals. Bookmark the permalink.

8 Responses to Animals keep getting smarter…