Several months ago, I started a “tag” on Twitter called #weirdscifacts, in which I am chronicling in short form various little oddities about the people, events, and phenomena of science.  I’ve vowed to do these facts daily for a full year, and I’m 130 in already!

Unfortunately, I didn’t realize when I started that Twitter doesn’t allow tag searches beyond the most recent week!  The only way to currently view my earlier facts on Twitter directly is to rummage through my entire set of Tweets, a tedious proposition.  So I’ve decided to post the week’s #weirdscifacts here every Wednesday, though I’ll do two weeks at a time until I catch up.

My #weirdscifacts are short blurbs that are intended to encourage people to investigate further.  Since I have more space on the blog, I’ll fill in a little more context when it will help understand the topic.

See the week’s facts below the fold!

1. Mar 14: Joseph Fraunhofer (1787-1826) got research funding because a house fell on him. At the age of 14, Fraunhofer was working as the apprentice of a glassmaker when the workshop collapsed on him.  The rescue was led by the Prince Elector of Bavaria, who took an interest in Fraunhofer’s life and provided him books and research time. 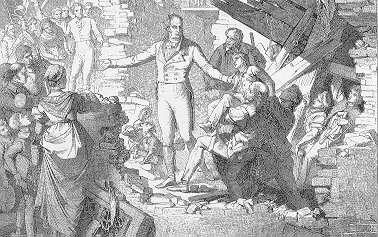 4. Mar 17: Francois Arago was imprisoned 3 times trying to return to France in 1808 — twice by Spanish and once by French (quarantine). Arago was traveling with Jean-Baptiste Biot to perform geographical measurements in Spain.  While he was there, France began to invade Spanish territory, and Arago was arrested as a spy.  He escaped, but the boat he was on back to France got caught by a Spanish corsair.  Once he was finally released, he spent some time in Algiers and was promptly quarantined by the French once he finally arrived home.

5. Mar 18: Godfrey Hounsfield would carry bull’s brains to his lab via public transportation to test the prototype CAT scanner.

6. Mar 19: There are naturally occurring lasers/masers in astrophysics. Lasers are often referred to as a source of light not to be found in nature, but this isn’t quite true; astrophysical masers and lasers have been observed, and are relatively common.

7. Mar 20: Algebraic solution of systems of equations (Gaussian elimination) first discovered in 150 B.C.E. China. The technique appeared in the Chinese book The Nine Chapters on the Mathematical Art.

8. Mar 21: It is not possible to stand a full or empty soda can on edge, but it is possible for a partially filled can.

9. Mar 22: The Doppler effect was proven experimentally by C.H.D. Buys Ballot in 1845 using trumpeters on a speeding train.

11. Mar 24: It is possible to blow a quarter from a tabletop into a glass via Bernoulli’s principle (blow above the quarter.)

12. Mar 25: Michael Faraday, unifier of electricity/magnetism, also tried to demonstrate a connection between gravity and E/M.

13. Mar 26: Natural nuclear reactors can and have formed in Earth’s distant past.

14. Mar 27: A.A. Michelson wrote a letter to R.A. Millikan blasting grad students and begging him to take them off his hands. I quote the letter in this post.

This entry was posted in General science and tagged weirdscifacts. Bookmark the permalink.