I thought I would do an update on the status of the momma cat and her five kittens that we’ve been fostering!  We’re now at the seventh week of age, and the kittens are really tiny versions of cats at this point, with all the playfulness, craziness, and peeping that one would expect!  We’ve also named all of the kittens, and pictures and names are provided below.

First up is Alvin!

Alvin is already looking like he’ll be a pretty big boy when he grows up.  He’s also one of the noisiest of the kittens, and used to whine when we picked him up!

Theodore is very much a lap kitty and, though all the kittens like to climb in laps, he really seems to relish curling up with humans.

Here is a picture of her mama, Snuggles, for comparison:

Cookie is very small, and looked to be the runt of the litter.  However, she is a wild machine, and can play and wrestle with the rest of the kittens just fine.  Her most regular sparring partner is the crazy-eyed Rascal!

This wasn’t a typical shot of Rascal, who in general is a wild and crazy boy!  When I was taking pictures, he was just awakening from a nap and not particularly inclined to run around.  Here is a more typical picture, taken at six weeks, that shows his tendency to attack us! 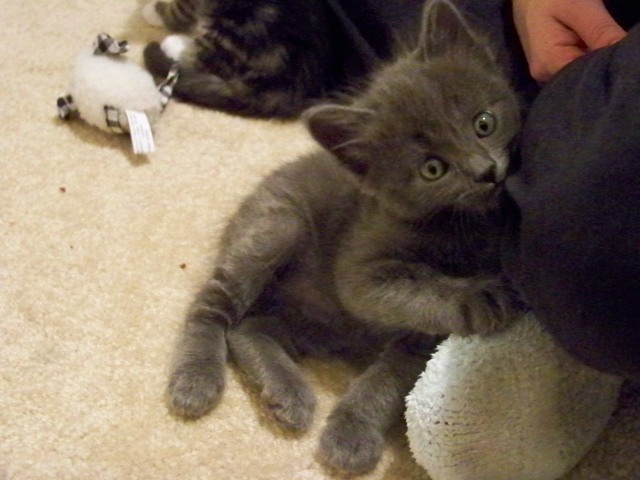 Here is also a picture from six weeks of him showing a toy that he means business!

The final kitten is the cutest of the bunch — named “Fifi Marie” by my wife!  All of the kittens, including Fifi, have figured out how to climb to the top of chairs for a nap: 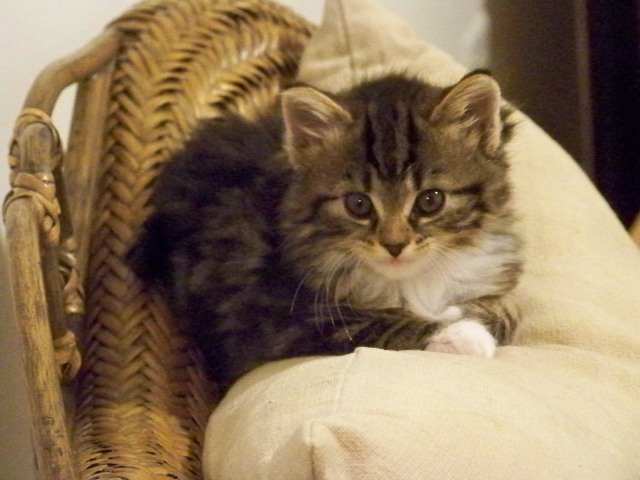 Fifi’s cute little face can reduce the most eloquent person to baby-talking gibberish!  Here she is at six weeks, laying by her mother’s tail:

All of the kittens are adorable, and we’re going to be sad to eventually see them go.  Fortunately, we have a couple of more weeks with them, and will enjoy every moment!

This entry was posted in Animals, Personal. Bookmark the permalink.