An American in Spain, part 3: Palaces and parks in Madrid

Posted on April 13, 2012 by skullsinthestars

Part 3 of a photo travelogue of my recent trip to Spain with my wife and her family! (Part 1, Part 2)

As I’ve noted in the past parts of this travelogue, our hotel in Madrid was located very close to the Palacio Real: the Royal Palace.  For the beginning of our third day in Madrid (well, the third day for my wife and I), we went to take a tour of the palace itself!

We approached from the north side, taking in the Gardens of Sabatini yet again.

But the most magnificent part of palace is of course its main entrance; once we paid our tickets for our tour, we entered the magnificent entrance courtyard. 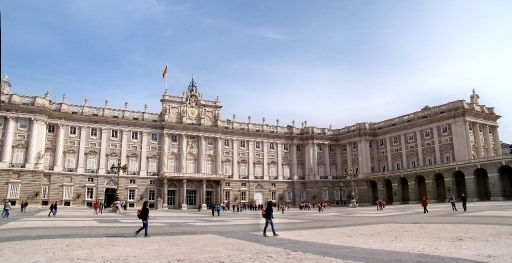 The courtyard and main entrance of the Palacio Real.

The palace has a long and colorful history.  It is built on the site of a 9th century fortress built by the Moorish king Muhammad I of Córdoba.  It fell into the hands of Alfonso VI of Castille in 1085, and for a period of time was not used much.  A major reworking of the palace was undertaken by King Charles V in 1536, but these changes didn’t last: a fire on Christmas Eve 1734 ruined the structure.  King Philip V ordered a new palace be constructed, and it was completed in 1764 in its current form.

The building was obviously designed to impress: it contains 2800 rooms and almost 1.5 million square feet of space!  We were not allowed to take photographs inside the palace, but there were tasteless flourishes on the outside as well.  Flanking the entrance are statues of the conquered Native American kings Moctezuma II of the Aztecs and Atahualpa of the Incas. 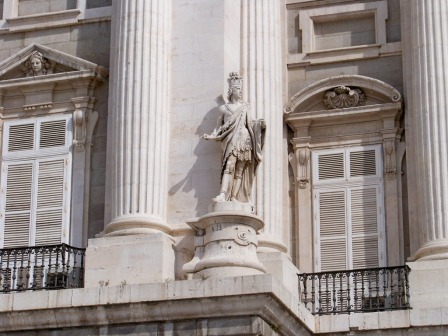 Statue of Moctezuma II on the Palacio Real. 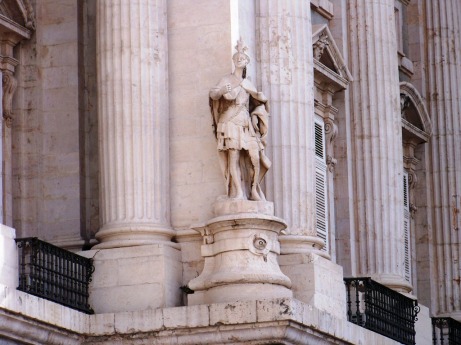 Statue of Atahualpa on the Palacio Real.

The Palacio Real is the official residence of the Spanish Royal Family in Madrid, though they actually reside in a more modest palace on Madrid’s outskirts.

The front facade of the Palacio Real.

After finishing our tour of the Royal Palace, it was time for lunch!  Instead of finding a restaurant, we opted to pick up some snacks at a local grocery store and then have a picnic at the massive Parque del Buen Retiro (“Park of the Pleasant Retreat”).  The park is a magnificent 350 acres of gardens, ponds, fountains, and buildings, and a wonderful place to spend time.  It has its origins as a retreat for the Spanish monarchy and dates back to the 1500s, though it has been expanded significantly through the centuries.  After being open to the public in the 1700s, it has become a wonderful place to spend an afternoon relaxing or playing.

The centerpiece, and most magnificent, part of El Retiro is El Estanque (“the pond”), and the magnificent monument to Alfonso XII, inaugurated in 1922.  Its design was the result of a contest initiated in 1902 by the Queen Mother Maria Christina of Austria.

As can be seen, one can sit on the steps of the monuments, or hire rowboats to admire it from the pond.  Another view:

Another view of the Monument to Alfonso XII.

The monument is perhaps the most overpowering feature of El Retiro, but it is not the only structure of interest.  For instance, a short walk away from El Estanque brought us to the Palacio de Velázquez, originally built in 1884 as the Mining Building for a national exhibition.

The Palacio, named after its architect Ricardo Velázquez Bosco, is now used for art exhibitions.

Detail of the front of the Palacio de Velázquez.

The Parque del Buen Retiro was used for a number of exhibitions.  The Palacio de Cristal (“Crystal Palace”) was built in 1887 for the Philippine Islands Exhibition by Velázquez as well, and was inspired by the 1851 Crystal Palace of London.

The Palacio de Cristal is also used for art exhibits; on our visit, the interior was decked out in a dazzling star-studded blue sky.

Interior of the Palacio de Cristal.

The “stars” in this case consisted of a densely-packed array of special keyboard characters: question marks, parentheses, asterisks, and so forth!

Another view of the Palacio de Cristal.

There was another surprise to be found at the pond alongside the Palacio: a black swan sitting on her nest! 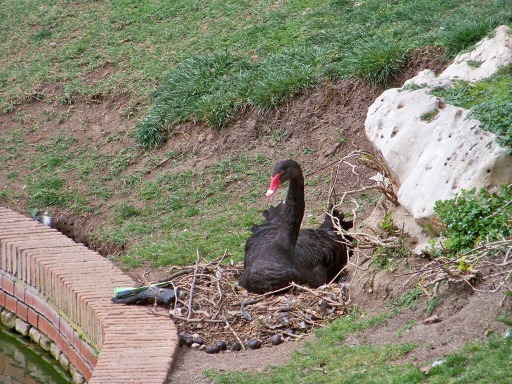 At this point we were all getting tired — the Retiro is quite large — but we walked a little bit further to get a view of an unusual sculpture.  It tuns out that the devil is on display in El Retiro!

El Angel Caído, on the Fountain of the Fallen Angel.

The Fountain of the Fallen Angel was erected in 1922, and at its top is a sculpture of Lucifer falling from heaven, El Angel Caído, designed by sculptor Ricardo Bellver.  The statue was designed much earlier than the fountain, in 1877, and earned a place in the third Paris World’s Fair in 1878, where another noteworthy sculpture was the head of the Statue of Liberty!

Finally, exhausted, we headed back to the hotel for a rest and then off to our final dinner in Madrid.  Along the way to find food, I managed to capture another lovely sunset alongside the Palacio Real. 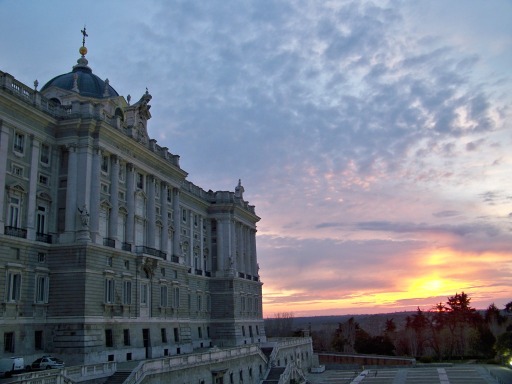 Another sunset alongside the Palacio Real.

We went to bed relatively early — the next morning, we would head off by train to Seville!