The Moon-Maker, by Arthur Train and Robert Williams Wood

Posted on April 20, 2012 by skullsinthestars

The 1916 novel The Moon-Maker by Arthur Train and Robert Williams Wood is, even at first glance, an unusual book for a number of reasons.  First, it is a science fiction novel written in 1916, long before science fiction had become a genre in its own right.  Second, it is a sequel to The Man Who Rocked the Earth, written in an era when sequels were relatively rare.  Third, it was co-written by a very important physicist, Robert Williams Wood, whose work I’ve talked about in several previous posts (here and here). 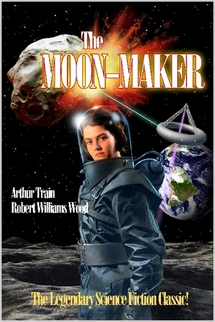 The book is quite ground-breaking in a number of other ways as well, however, not the least of which is its early, unique and accurate depiction of interplanetary space travel!  Having just finished reading it last week, I thought I’d share some thoughts on this intriguing novel.

WARNING: since The Moon-Maker is a direct sequel to The Man Who Rocked the Earth, this review necessarily contains spoilers about its predecessor.

A quick recap:  in The Man Who Rocked the Earth, a mysterious scientist known only as “PAX” gave humanity an ultimatum:

PAX possessed the tools to enforce his commands: he had discovered the secret of nuclear power and the ability to harness it in the production of nearly unlimited force.  To demonstrate his strength, he generated an atomic blast that noticeably shook the planet and increase the length of the a day by five minutes.  (It is interesting to note that huge earthquakes can actually alter the length of a day, though by not nearly the same amount!)

The nations of the Earth were at first skeptical, then defiant.  Attempts to continue the endless wars were thwarted by PAX himself, who appeared in a nuclear-powered flying ring with the ability to release mountain-shattering blasts.

While governments scrambled to decide what to do, the brilliant physics Professor Benjamin Hooker performed calculations and determined that PAX must be located in the desolate wastes of northern Canada.  He ventured out into the wilds with only a pair of wilderness guides to assist him, determined to meet the mysterious PAX.

Hooker arrived at PAX’s base just as PAX began to release another devastating assault on the recalcitrant world governments.  However, the machinery malfunctioned, resulting in a devastating explosion that killed PAX and left his base in ruin.  Fortunately, the flying ring was parked safely some distance away, and when Hooker reaches it the dazed electrician on board mistakenly assumes that Hooker is in fact PAX himself!  (The two having never directly met.)  Hooker and the electrician Atterbury manage to navigate the ring back to the United States.

The Moon-Maker directly picks up where The Man Who Rocked the Earth ends.  While Hooker was away, the nations of the world had agreed to an end to war and complete disarmament, leading to lasting peace.  When Hooker returns home in the flying ring, landing unceremoniously in a golf course, people assume (with a wink and a nod) that he was PAX all along, and he is given tremendous leeway in his research and activities.

He doesn’t have much time to enjoy himself, however, as a newspaper soon reports:

EARTH TO BE ANNIHILATED!
ASTEROID “MEDUSA” WILL TORPEDO OUR
PLANET
ON APRIL 22
CATACLYSM NOW ABSOLUTELY CERTAIN

Faced with the destruction of the planet, Hooker assembles a team to join him in the flying ring, travel into outer space and annihilate the asteroid with the ring’s deadly “lavender ray”.

Oh, yes! The Moon-Maker is perhaps the very first story to feature the idea of sending a spaceship to destroy a planet-shattering asteroid — and it was written in 1916!*

What follows is a delightful adventure in space exploration, as Hooker and his crew venture into space — with a pit stop on the Moon — in order to save the world.  The science of space travel is well represented (not surprising with a physicist co-author), and gravitation, Newton’s laws, and space travel are all treated with surprising accuracy.

One other aspect of the novel is quite exceptional for its time — the character of Professor Rhoda Gibbs.  Introduced as a romantic interest, she first appears in a chance encounter with Professor Hooker on a park bench, in which she looks over his shoulder and ends up helping him solve his mathematical problems!

At the same moment, the bellow of a factory whistle somewhere over Alexandria way caused Professor Hooker to arouse himself out of his state of semilethargy.

“By thunder, it’s one o’clock!” he exclaimed, and without further ado, he arose, bolted across the Circle, and made a flying leap for a streetcar which was just swinging into Connecticut Avenue.  The tailor-made girl followed him with an amused gaze.

“I really believe I know more mathematics than he does,” she remarked complacently to herself.  “But isn’t he just a dear?”  And with that, she too, arose and walked briskly away, as if she knew exactly where she was going — which she did.

Gibbs plays a key role in helping Professor Hooker make calculations relating to the asteroid encounter and, not surprisingly, the headstrong woman ends up taking a trip on the mission in the flying disk — without getting permission!

Her character reinforces an impression I’ve had for some time: though plenty of ignorant people have argued through the years that women do not have the same scientific and mathematical ability as men, some of the most brilliant scientists and mathematicians have wholeheartedly encouraged and accepted women in their fields.  It looks like we can add Robert Wood to this list.  It is unclear how much of the book he himself wrote — I suspect he provided some plot ideas and technical information, while the professional novelist Train did the actual writing — but certainly the inclusion of Rhoda Gibbs was done with his blessing.

The Moon-Maker is a charming novel that will be enjoyed by anyone who likes classic science fiction.  The conclusion of the story leaves open the possibility for more space exploration adventures in the flying ring, but it seems that Wood and Train’s collaboration ended here.  It is a shame, because the two books they wrote are fascinating and innovative early science fiction.

Postscript: I should note that the Lulu edition of The Moon-Maker includes the earlier novel, The Man Who Rocked the Earth.

* The consequences of this revelation on the creativity of Michael Bay’s Armageddon is left to the reader.

4 Responses to The Moon-Maker, by Arthur Train and Robert Williams Wood