Posted on April 27, 2012 by skullsinthestars

Most of us are familiar with the Greek myth of Pandora and her eponymous box.  In a standard telling, Pandora is given the box by Zeus but is explicitly told never to open it.  Pandora’s curiosity gets the better of her, however, and when she raises the lid she releases all the evils of the world.  She attempts to put the lid back on, but it is too late — what is done cannot be undone.

The myth of Pandora came to my mind while pondering the novel Exogene, by T.C. McCarthy. 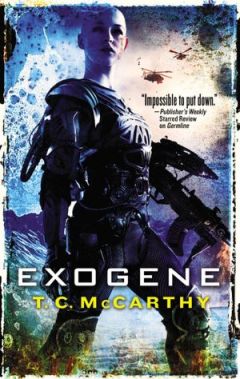 In this second book of the Subterrene War trilogy, one gets the ominous feeling that, like Pandora, humanity is being enticed by the allure of short-term gain into making decisions that will lead to doom.  As happened with the first book in the trilogy, Germline, I found Exogene pretty much impossible to put down.

The novel is set at an unspecified point in the future, when the United States has become locked in a brutal war against Russia in Kazakhstan for control of rare earth metals vital for technology.  To back up their regular forces, the U.S. has bred genetically-engineered super-soldiers — Germline units — in the form of nearly identical teenage girls.  Raised, trained and indoctrinated in vats, the girls are released into combat at the (effective) age of 15, and are terminated at age 18.  They are designed to break down both physically and mentally at that age, in a process known as the “spoiling”.  The termination, and the spoiling, are necessary because, as they mature, the Germline units develop thoughts counter to their programming.

In Exogene, we follow one of these solders — simply named Catherine — as she nears the end of her service.  She may very well be the most skilled killer ever produced by the program, but like others before her she begins to question her predetermined fate and the “religion” that the military has raised her into.  Soon, she has fled from the U.S. forces and, fighting the spoiling and anyone who comes across her path, seeks to stay alive at any cost.  Traveling away from the front lines, Catherine still must deal with the far-reaching consequences of such a massive conflict.

In Exogene, I got the feeling that I was descending further into the madness of war — no small feat, considering Germline was unrelentingly horrifying.  At this point, I’m getting a strong “Apocalypse Now” vibe from the two books of the trilogy I’ve read: each book is taking us further from sanity and deeper into monstrosity.  In Germline, we saw the war from the point of view of a reporter who becomes an active participant, and the Germline units were an integral part of the story but somewhat aloof.  In Exogene, we get to see the war from a Germline unit’s perspective, and Catherine in turn gives us our first close up encounters with the Russian forces and the even more extreme things they are willing to do for victory.

It is the events in the Russian camp that gave me the strange feeling about Pandora’s Box.  A super-solider is still essentially a human at heart, and the Russians have plans to do even more extreme genetic modifications to make an even more powerful and indestructible warrior.  It all seems coldly reasonable, much like Pandora’s decision to open the box, but also suggests that the nations are so focused on the short-term goal of winning the war that they fail to see how their efforts might lead to disaster.  To me, it sounds like the same cold reason that led to the creation of the atomic bomb.

One of the great strengths about T.C. McCarthy’s writing is that he can make insanity sound reasonable.  The cult-like religious indoctrination of the Germline units might come across as utterly ridiculous in the hands of a lesser author, but McCarthy makes it plausible, even inevitable.  One can almost picture a gathering of scientists and soldiers, brainstorming the best way to keep their new genetic tools under control.

For me, Exogene did everything I hoped it would do.  Though it is set in the same war as Germline, it is a completely different story that shows us entirely different actors and aspects of the conflict.  I read the book within a couple of days (including reading non-stop on the plane to Spain) and thought about it for many days afterward.  It both stands on its own and builds upon its predecessor.  Highly recommended.