Posted on August 5, 2012 by skullsinthestars

If it were a mystery novel, The Murderer Invisible would be a failure right off the bat, as the plot twist is explained right there in the title!  As science fiction and horror, however, this 1931 book by Philip Wylie is eerily effective, and the title is in fact an understatement of the acts that transpire within its pages.

Perhaps the best short description of The Murderer Invisible is to call it “H.G. Wells’ The Invisible Man on crack cocaine.”  The villains of the two stories have similar backgrounds and similar goals; they also share in the unpleasant realization that invisibility has some unexpected and unpleasant side effects.  However, where the invisible scientist Griffin of Wells’ tale is defeated before he can carry out his plans for world domination, Wylie’s William Carpenter manages to achieve many of his goals.  The result is death, destruction and worldwide panic.

I came across a reference to this novel while researching one of Wylie’s famous stories, Gladiator, which was likely a partial inspiration for Superman!  Philip Wylie was a prolific author who made his mark on science fiction most notably with the novel When Worlds Collide, which was also turned into a 1951 movie.  Many of his other novels seem to have faded into relative obscurity — as I’ve learned through experience, however, this does not mean that they are of poor quality.

Let’s take a look at The Murderer Invisible; some mild spoilers follow.

The story begins with Daryl Carpenter, the niece of the eccentric scientist William Carpenter, arriving at the latter’s isolated home and laboratory.  Daryl has fallen on hard times, having failed to find work in a poor economy, and she has come to her supposed uncle’s house to seek shelter and perhaps work.  Carpenter’s appearance surprises her: he is a monstrously tall and bulky man whose appearance can perhaps best be summarized as ogreish.  Though he reveals that his brother — Daryl’s father — was adopted and not a blood relation, he grudgingly agrees to take on Daryl temporarily as an assistant in his great scientific project.

And what is this project?  Carpenter hides nothing from Daryl, though he swears her to secrecy about it: he intends to make himself invisible.

“Invisible!” This time he shouted.  “Invisible even as I will become!”

“I!  I have made a growing plant invisible.  Step by step I shall study and build up the process until I can apply it to myself.  There will come a day when this ugly carcass of mine will vanish into thin air and then, like God himself, I shall go out into the world and work my way.  Taking what I require, listening to everything secret and private, conferences, discussions, plots — knowing all — omnipresent, and hence omnipotent.  I’ll build my kingdom by my knowledge.  I’ll use it ruthlessly — to blackmail, to command.  And after that I’ll shape the world to my own plan.  When I die — in some spot where no one will find the tangible, unseeable remains of me — the world will be ten thousand times a better place — against its will — and I will have done that.”

Ironically, the only complications to Carpenter’s plan comes in the form of his assistants!  The unexpected arrival of Daryl is followed several weeks later by the planned arrival of Bromwell Baxter, a brilliant scientist who agreed to work with Carpenter based on several tantalizing hints the latter man had given of his work.  Daryl and Baxter are immediately smitten with one another, and Baxter learns of Carpenter’s true ambitions through Daryl. The two of them conspire to spy on Carpenter and keep his world-conquering plans from coming to fruition.

Things go awry, however — despite Baxter’s doubts that human invisibility can ever succeed, Carpenter progresses rapidly in his research, working his way up the evolutionary chain to induce invisibility in creatures of increasing complexity, from fungi to plants to invertebrates and onward.  Before he can be stopped, Carpenter learns of Daryl and Baxter’s treachery and imprisons them; he then tries his invisibility formula on himself.

Here we get one of Wylie’s great additions to the fiction of invisibility.  Though the drug worked well on lesser animals, it takes time for it to penetrate into the bone of a human being, leaving Carpenter initially in the form of a human skeleton!  He is spotted and nearly lynched by superstitious locals, but manages to slip away, complete his transformation, and begin to work on his plan to conquer humanity.

The plan is eerily a prophetic one for the modern era.  Working from hidden bases in the heart of major cities, Carpenter begins by seeking revenge against people who had taken advantage of him earlier in life.  He is able to commit murder with impunity, sneaking into and out of secure facilities with ease.  With his vengeance complete, he then turns to acts of terrorism, sneaking high explosives into public locations like train stations, causing mass casualties.  After ten days of terror, he makes a public demand that the United States government be handed over to his complete control, or even more horrible acts will follow.

The only two people who know of Carpenter’s secret and have even a chance to stop him are Daryl and Baxter.  They have nobody else to rely upon, as the police dismiss their story outright.  Even worse, Carpenter is seeking the two of them out.  He is obsessed and in love with Daryl, and is murderously jealous of Baxter.  How can they, or anyone, stop an invisible and brilliant psychopath?

The story is a surprisingly compelling one, and the massive carnage that Carpenter manages to inflict upon society justifies my view of this story as “The Invisible Man on crack”.  The two science fiction tales have many striking similarities in the beginning.  Both villains are brilliant scientists who undertake invisibility to hide their perceived deformities: Carpenter wishes to hide his monstrous size, while Griffin is an albino.  Both scientists perfect a chemical process for invisibility, and both run into unexpected complications in its implementation.  Both characters are irredeemably insane, and plan to use their power for world domination, though Carpenter gets much further along than Griffin.  I can imagine that Wylie read H.G. Wells’ novel and wondered to himself, “What would have happened if Griffin had succeeded?”

Wylie does not delve as deeply into the science of invisibility as Wells did, though he seems to have been as well versed in the sciences as Wells himself.  The most detailed description comes early in the book (when Baxter still has doubts that the work will ever succeed), and is explained by Baxter to Daryl.

“Then you believe he won’t go on with it?”

“Not that.  He struck me as a singularly perseverant devil.  But beyond his fungus — he’ll not get far.”

Baxter lit a second cigarette from the first.  “It’s complicated.  To be invisible a thing must have no color, must be transparent, and must not refract or reflect light.  Pretty nearly every known substance has all those properties.  Plate glass is nearly invisible, but the light shimmers from it and you can always tell at a glance when there is a pane in a window and when there is not, when a window is open and when it is closed.  See what I mean?”

“Now.  Consider Carpenter’s fungus.  It is a kind that grows in the dark.  Hence it has no color to speak of.  Being a fungus, it is a very simple plant from the point of structure — so that what would affect one cell would affect the whole thing.  In other words, that fungus was the easiest thing to make invisible that Carpenter could find — with the possible exception of things like bacteria and paramecia.  Even there, he would be fooling with chromatin of high complexity.

“He makes the fungus vanish from human view.  Excellent, I say.  A splendid analytical and synthetic job.  But when he goes to work on himself — he has to cope with three trillion cells, of hundreds of types.  A magician can make a half dollar disappear.  But he couldn’t do away with the Woolworth Building and the Leviathan with the help of a wand and a top hat.  Unless–”

“Well — there are one or two ways he might do it at that.  But not by chemistry.   Physics.”

“He could — conceivably — bend the light rays around an object and collect them on the other side in the same order so that you could see everything behind the object and not see it.  But that, clever as it might be, could only be done in one spot at a time.  You couldn’t pick up a fungus that had vanished in that manner and carry it around the room — it would get out of — focus.”

Wylie’s conception of chemical invisibility is similar to that of Wells: he imagines a process by which the human body is rendered transparent.  However, he correctly notes that transparency isn’t enough, as glass can still (under most circumstances) readily be seen.  The missing ingredient, which Wells describes in more detail, is that the refractive index of the body must be made equal to that of air.  I describe Wells’ work in more detail in this post on Isaac Newton’s connection to invisibility.

The idea of bending light rays around an object is remarkably similar to the way in which theoretical invisibility cloaks proposed by physicists in 2006 would actually work!  Below is a simulation from the original paper by Pendry et al., showing light rays being bent around a central hidden region of a cloak. 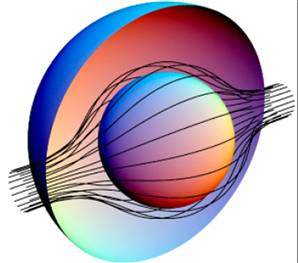 These hypothetical invisibility cloaks are in principle perfect, contradicting the arguments by Baxter.  However, in practice even these modern invisibility cloaks would not be perfect, as some light would inevitably be absorbed by the cloak material.  Also, this original design only works for one wavelength (“color”) of light, though more recent designs can hide from multiple wavelengths simultaneously.  It is important to note, though, that no experiment has yet come even close to a result that can reasonably be called “invisibility” in the popular sense of the word.

The idea of using chemicals to make a living creature see-through has also recently become at least slightly more plausible!  In September of last year, researchers in Japan announced the creation of a reagent called “Scale” that can actually turn biological organs transparent! An image via the io9 article linked above shows a pair of mouse embryos; the one on the right has been treated with “Scale” and is see-through. 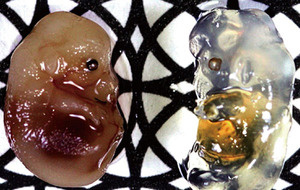 It is a far cry from see-through organs to an “invisible man”, but a quote from one of the researchers is quite suggestive:

We are currently investigating another, milder candidate reagent which would allow us to study live tissue in the same way, at somewhat lower levels of transparency.

As far as invisibility goes, science fiction has come closer to being science fact in recent years than anyone could have possibly imagined!

Wiley’s novel The Murderer Invisible, though it clearly draws inspiration from H.G. Wells’ earlier work, stands on its own as a wonderful scientific thriller, and as we have noted it goes further than Wells in exploring the implications of invisibility on humanity and society.   It is an enjoyable page-turner that is well-worth reading.

Unfortunately, it does not seem to be currently in print or available free online, but used copies can be purchased quite inexpensively through online booksellers.

This entry was posted in Invisibility, Science fiction. Bookmark the permalink.