Bertram Mitford’s In the Whirl of the Rising

Posted on September 27, 2014 by skullsinthestars

Last week I found myself in the mood for some adventure fiction, and that made me immediately think of Bertram Mitford!  A contemporary and competitor of sorts of H. Rider Haggard, Bertram Mitford (1855-1914) was a prolific writer of novels set in Africa.  Thanks to Valancourt Books, I’ve read a number of his works: The King’s Assegai (1894), The Weird of Deadly Hollow (1891), Renshaw Fanning’s Quest (1894), and the sublime The Sign of the Spider (1896).  Having almost tapped out all of Valancourt’s Mitford selections, and not being a big fan of reading books online, I was happy to find a few other Mitford books have been recently released in print form*.

What appears to be the original cover of In The Whirl of the Rising, from the Barnes & Noble Nook edition.

In the Whirl of the Rising, published in 1904, is an action thriller set in Southern Africa that tells the story of a native uprising against the British settlers, and the fight by the settlers to survive against murderous warriors.  As one might imagine from the subject matter, to today’s sensibilities it is a very problematic book.  It is nevertheless well written, and one can learn a lot about 19th century colonialism in reading it.  Also, I would argue that Mitford gives hints that he is slightly more enlightened than many of his contemporary countrymen.

The book follows the trials and tribulations of Piers Lamont, an Englishman who sets off to Africa after he is accused by his fiancée of perhaps the worst crime imaginable — cowardice.  Lamont starts a new life on a rural farm, supports an eccentric local gold prospector working on his land, and has even captured the attention of the pretty young lady Claire Vidal when he inadvertently learns that the local Matabele people are planning a bloody uprising to chase out the foreigners.  Rumors of cowardice have pursued Lamont to Africa, however, and he knows that no one will believe his story without proof.  Can he prevent a massacre of the unsuspecting settlers?  Even if he can, will he be able to survive the war that follows?

With its strong emphasis on cowardice and overcoming the shame of it, In the Whirl of the Rising appears to be Mitford’s take on the classic novel The Four Feathers by A.E.W. Mason.  I usually avoid making such direct comparisons like that but, considering the timing– Feathers in 1902 and Rising in 1904 — it seems likely that Mitford wrote the latter to capitalize on the success of the former.  The stigma of cowardice is a major theme of Rising, even though it is clear from the very beginning of the novel that the accusation is inaccurate.

The cowardice, as we have noted, results in the destruction of Lamont’s engagement at the beginning of the novel.  Doomed and destructive relationships are, in fact, a recurring theme in Bertram Mitford’s novels, appearing in all of those I’ve read so far to some degree.  Did Mitford himself have relationship troubles?  There’s so little information available about him, so it is hard to say.  He was married in 1886 and had two children, so it is difficult to imagine him writing autobiographically when his wife would likely be reading his novels.

As a story about a native uprising, the book is undoubtedly racist.  More specifically, it is filled with racial slurs, as you might expect to be uttered by settlers who are fighting for their lives from the natives.  What is mostly missing is the motivation for the uprising, as the novel is told primarily from the point of view of the British settlers.  There is some nuance, however, as Mitford hints at the reasons.  A plague, the rinderpest, has decimated the cattle of both the settlers and the natives, and the colonial forces have slaughtered, without much consideration, the native stock, in an attempt to contain the disease.  Smart settlers like Lamont are keenly aware of how resentful the natives are towards the intruding British.

Through most of the book, the natives are unfortunately treated as simple villains.  Only near the end do we see some sympathetic Africans.  Nevertheless, Mitford does not play the tribesman as simple stereotypes; they show real intelligence and, at times, wisdom.  This is consistent with Mitford’s other books, which show more sympathy towards the native Africans.  Or, perhaps, I’m being overly kind because I’m fond of his writings?

Once the action begins, it is hard not to find the story thrilling.  There are a number of truly nail-biting scenes, including an early one where Lamont must stop the slaughter of hundreds of townsfolk using only his wits.  Later in the novel, Lamont must race to rescue a caravan beset by a horde of warriors; this scene is featured on the cover of the book.

It is worth noting that In the Whirl of the Rising is based on real events that were well-known in Mitford’s time.  In the 1890s, there were two wars involving the Northern Ndebele (Matabele) people, the first in 1893 and the second in 1896.  The First Matabele War of 1893 originally started when the Matabele attacked a neighboring tribe for refusing tribute; to avoid losing the confidence of the natives under their protection, the British entered the fray.  The Matabele were thoroughly defeated in early 1894.

The Second Matabele War, begun in early 1896, was a direct revolt against the authority of the British South Africa Company.  It is from this conflict that Mitford seems to have drawn most of his inspiration.  In the novel as well as the real conflict, a spiritual leader of the tribes instigated the violence, and in both the result was much bloodshed amongst white settlers and tribesman alike. The spiritual leader, the Mlimo, convinced the tribes that the rinderpest was the result of foreign meddling.  In both the story and the real event, the Mlimo planned to attack the foreigners during an annual celebration, when they would be least prepared to defend themselves.  Also, both the story and the real conflict show the settlers banding together in major settlements for protection, suffering under an extended siege from the Matabele warriors.

Real life, however, is once again stranger than fiction.  The real siege of Bulawayo was broken by British forces under the command of General Carrington with his Chief of Staff Colonel Baden-Powell.  The latter would become one of the military leaders of the Matabele War, and during his campaigns he learned stories of the American West from an American scout.  These stories later inspired Baden-Powell to publish a book, Scouting for Boys, and not long after he founded the Scout Association of the United Kingdom, becoming its first chief Scout.  So the international Boy Scout, and Girl Scout, organizations can be traced back to a man putting down a native rebellion in the 1890s. 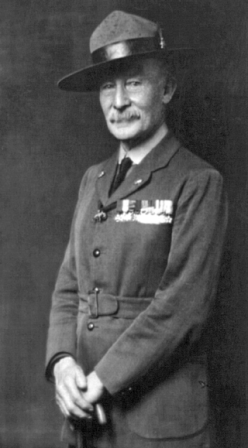 But what did I think of the novel In the Whirl of the Rising?  Though it is relatively enlightened in its treatment of the native African population, it nevertheless does them a disservice by turning their story into a simple adventure story, albeit a well-written one.  I found it fascinating to read, if for no other reason than the insight it gives into the colonial mindset of that era.

* Not as good quality as Valancourt editions, though!

This entry was posted in Adventure fiction. Bookmark the permalink.