The blog has been quiet this past week because I’ve been literally halfway around the world!  I was invited to China to give a pair of scientific talks and plan out some collaborative work.  The trip was productive and fun, and already I’ve been invited to return again, which I will be seriously considering (though not right away — 20 hours of flying is brutal!).

My hosts at Northwestern Polytechnical University were very hospitable, helping arrange a number of fun activities.  My former postdoctoral advisor has also been working there for several months every year, and he not only helped arrange an invitation for me but showed me around and helped me, as a clueless American, navigate a very different culture.

There was so much to see and do, and I tried to do as much as possible and take pictures of everything.  I’ll write a number of posts about my trip, and I’ll start with a general overview and some impressions of China, stretching over the entire trip.  This wasn’t my first visit to China — I visited Shanghai some ten years ago — but everything was still quite novel to me.

I should first mention how well-treated visitors to Chinese universities are!  The people are incredibly hospitable, and make sure that you are treated well for your entire visit, including making sure you get to and from the airport okay.  Sometimes this can be a little overdone; the first night I arrived, I was put up in the biggest, fanciest suite in the university hotel, as the photos below show.

The bedroom section of the suite. 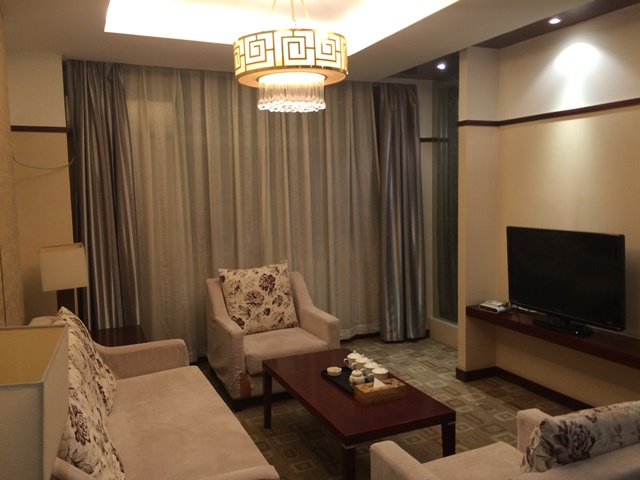 The living area of the suite.

The catch: they could only provide the suite for the first night of my visit, the night I arrived, and then I had to change to a smaller room.  The suite was very nice, but it was a little disconcerting to have to get up (relatively) early in the morning after arrival and switch rooms!

Northwestern Polytechnical University is located in the city of Xi’an, a relatively small city in China with only 5,500,000 people in its urban areas, and 8,460,000 in the entire municipality!  For comparison, the metropolitan area of Chicago, third-largest in the United States, has 10 million people in it.  The size and density of the city and the rate of growth within it is jaw-dropping to Western eyes; everywhere you look there are new buildings under construction, and high-rise residential buildings as far as you can see.

Block of high-rises on the way out of Xi’an.

This rapid rate of growth applies to universities, as well.  NPU has two campuses, the “old” campus, which lies on the South end of the urban area of the city, and the “new” campus, which is about an hour away from the city by car.  The new campus is massive, both in area and in the size of its buildings.

Entrance to the new campus of NPU, with the massive library in the background.

As I understand it, the dark sculpture in the foreground of the photo is a (scaled-up) reproduction of an ancient vase that was found near the campus.  This vase has the word “China” written on it, and is apparently the oldest artifact found with that word.  In the background of the photo, a stone figure therefore offers his sword to China itself.  The sword is a popular spot for graduating students to take photographs near or on, as I saw during my visit.

I gave two talks at NPU during my stay; the first one was broadly advertised, and I couldn’t help take a photo of the poster.

Talking about invisibility is kinda my thing.

As I noted, hospitality was very important to my Chinese hosts, and I had several huge meals with them, consisting of a large number of plates that were all shared.  It took me a while to learn that, as the guest of honor, I was expected to take the first bite of every major new dish that came out.  (I am quite frankly surprised that I didn’t cause major offense to someone during my visit; maybe I did?)  Lunch is considered the most important meal of the day, so the hosted lunch ended up being far, far more than I usually eat at that time. 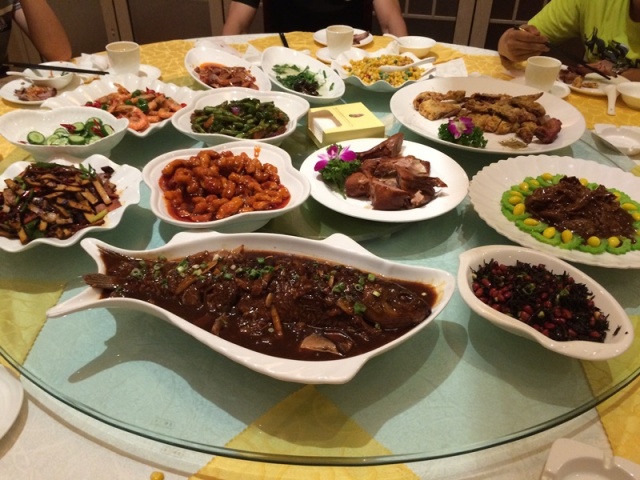 Lunch, for six people. I hardly made a dent in it, though the rest of the folks in attendance managed to finish a lot of it off.

As a celiac disease sufferer, traveling in China was a bit of a challenge.  I usually wasn’t exactly sure what I was eating, and absolutely nobody there had any awareness of wheat gluten intolerance or a gluten-free diet.  This is not surprising: as I understand it, celiac is most prevalent among people of European descent, and I suspect that relatively few Chinese have problems with it.  So, when eating, I had to choose food that minimized by gluten exposure, and was only partly successful.

Speaking of food: at night, certain sections of the city fill up with street vendors.  As I understand it, these street shops are not strictly legal, but the police guardedly allow the business to continue.  My postdoctoral advisor introduced me to a wonderful and delicious Chinese pancake made by a very talented street vendor.  This same vendor cooked the same pancake at a regular job during the day; he worked unofficially at night to bring in a little extra money.

Some of the street vendors near the old NPU campus. Note the pedestrian bridge; such bridges are often the only way to get safely across the road.

The best place to find street vendors, however, is in the Muslim Quarter of the city, inside the old city wall built in the 14th century (more of this later).  Xi’an has long had a Muslim population, in fact, and was the first city in China to be introduced to Islam.  Practice of Islam was officially sanctioned in 651 C.E. by Emperor Gaozong of the Tang Dynasty.  in the Muslim Quarter, many of the faith work selling food on crowded and lively streets.

A sample of the busy streets of the Muslim Quarter.

The oldest mosque in China, the Great Mosque of Xi’an, is also located in this area, though I didn’t have time to visit it and take photos!

Also in the city center are the beautiful Drum Tower and Bell Tower of Xi’an, which were built in the 1380s during the early Ming Dynasty.  The bells would be rung at dawn to signify the beginning of the day, and the drums would be struck to signify the end of the day.  Now, at night, the towers look absolutely incredible.

The Bell Tower of Xi’an at night.

It is hard not to stop and take photos of everything when visiting China, as everything is at least a little different than things in the United States.  For example, in China, McDonald’s is quite common, but its symbol isn’t Ronald McDonald, but “Mister Mickey.” [UPDATE: See the comment below by Yahong.  My information on Mister Mickey appears to be wrong!]

A McDonald’s in Xi’an, with an image of Mister Mickey.

Some things, however, are exactly the same as in the West, as this computer screen I saw at the Terracotta Army demonstrated.

So many cool things to see in China, and I’ll share some of the cultural sites in the next few posts.  One aspect of Chinese cities that is worth acknowledging now, however, is the prevalence of dual Chinese-English language signs.  Of course, these signs are often not perfectly translated, which leads to some amusement.

Before I share these, though, let me note that I am not trying to make fun of the Chinese people!  I am certain that it is quite difficult to make perfect translations between Mandarin and English, and it is a credit to the Chinese that they took the time to make their public places more accessible to foreigners.  I am also certain that, if we were to even attempt to make dual-language Chinese-English signs in the U.S., we would make things absolutely hilarious to the Chinese.  That being said, I chucked quite a few times on my trip…

In China, it is strictly prohibited to physically abuse elevator doors.

Many otherwise innocent Chinese translations end up sounding quite ominous. 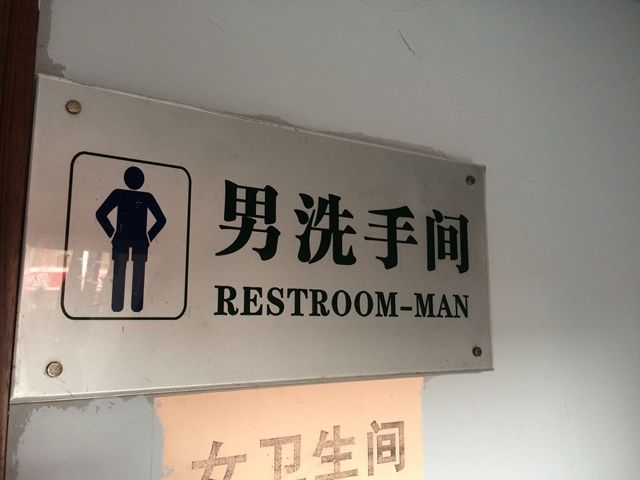 Chinese superheroes are rather uninspiring. 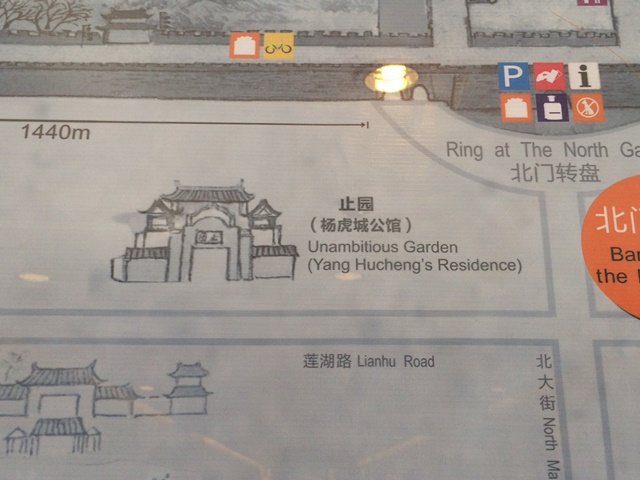 I think that China needs to work on being more enthusiastic about their tourist sites sometimes.

I saw many, many wonderful things while in China and talked to many interesting people.  In the next few posts, I’ll talk about a few of these sites, including the Terracotta Army, the Great Wild Goose Pagoda, and the Silk Road.  Stay tuned!