On my first weekend in Jinan, I vowed to get out and brave the city by myself. On that Sunday, I went to Baotu Spring, which I wrote about in Part 1.  On that Saturday, though, I went to the Shandong Museum, which I will cover in this post.

Why am I writing about my first experience in Jinan in Part 4 of my series of posts? Well, it takes a lot more research and effort to properly describe a history museum, so I wanted to take extra time to get around to it!

The Shandong Museum is, as its name suggests, is the principal museum of Shandong Province, a province on the east coast of the country. It is one of the largest museums in the country, in fact, and has a significant history to it, though the current building was completed and opened to the public in 2010.

The first incarnation of the museum was in fact founded by a Baptist missionary in Qingzhou in 1887, and was called the Yidu Museum. It was moved to Jinan in 1904 and renamed Guangzhi Yuan.  In 1942, the museum expanded to a compound in the (I kid you not) Red Swastika Society. The Shandong Provincial Museum was founded in 1954, and divided its collection between the Guangzhi Yuan and the Red Swastika Society locations.  A new unified museum location was opened in 1992, but more space was needed, leading to the construction of the current building.

The modern building is definitely impressive. See the dome at the top of the museum? That admits light into the central hall, where it is filtered through a magnificent ceiling.

The jade ceiling of the museum.

I have read a number of tourist descriptions stating that the ceiling is in fact made of transparent jade, though I have not been able to confirm this in any official documents. Considering the museum has an extensive jade collection, though, it is not improbable.

Where to begin? I can’t possibly share every artifact that I came across and photographed while visiting the museum, so I will simply hit the highlights, and present them in the order I saw them. This happens to also be the numbering of the galleries themselves.

Gallery 1 is The Exhibition of Buddhist Art. The earliest extant Buddhist temple in Jinan was constructed in 351 CE, and Buddhism flourished in the region after that, resulting in a lot of stone Buddhist sculptures.  These sculptures attracted little notice until the 1980s, when many statues were unearthed. In 1996, a cache of sculptures were discovered in Longxing Temple in Qingzhou, leading to national interest.  The museum highlights some of the loveliest specimens uncovered in Shandong.

At the entrance to the exhibit, one is greeted by the following impressive figure.*

The statue dates from the Northern Wei Dynasty, 527 CE, and was part of the Jiegong Temple. There is an inscription on the statue giving the date of dedication, which is why it is dated so accurately.

Buddhist statues of the area have their own distinct style, called the “Shandong style.” They are characterized by figures in light flowing robes and usually possessing a downward-facing dragon above their heads biting a lotus. 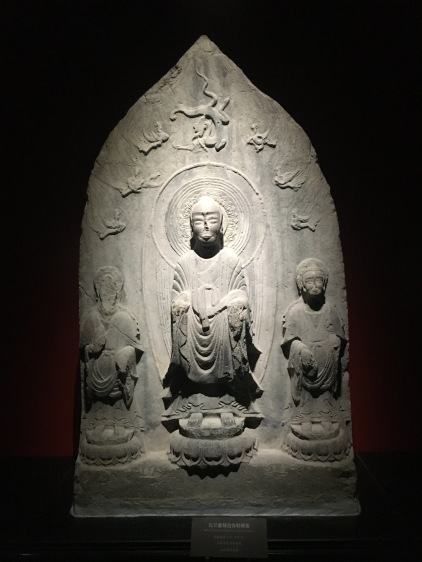 Another example of this style follows, in better condition. 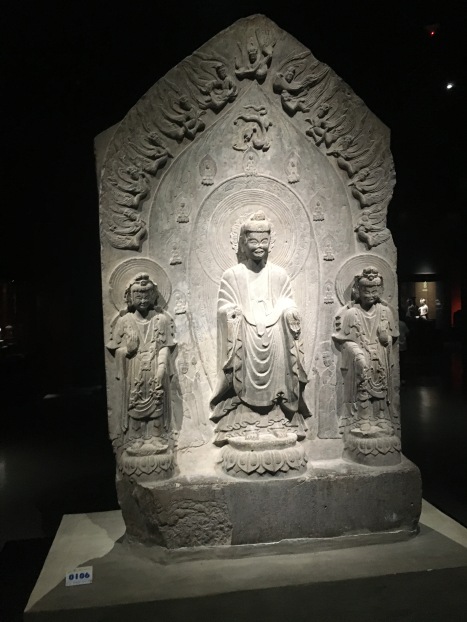 Detail of the inverted dragon.

Not all statues are of the same style; see, for example, the undated Bodhisattva statue below, which still retains some traces of its original paint.

And there are other Buddhist artifacts on display, as well, such as this Stupa with Dragon and Tiger 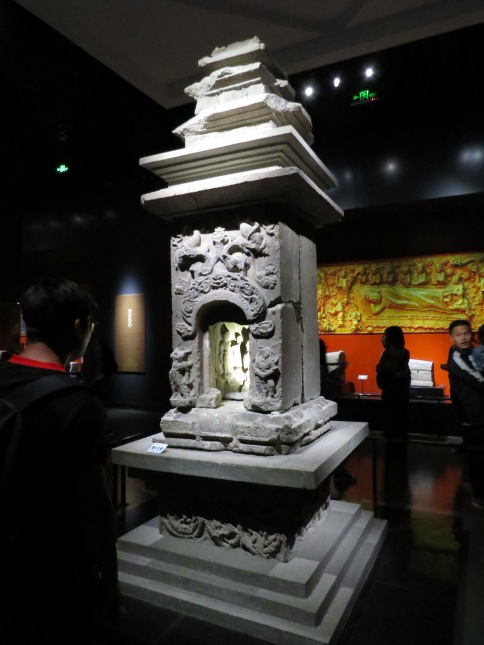 Stupa with Dragon and Tiger, commissioned by Yang Zan, 743 CE.

A stupa is a structure used to contain relics; famous ones are actually buildings, but apparently small ones like this could also be used for meditation purposes. The interior makes it look like a building in miniature. 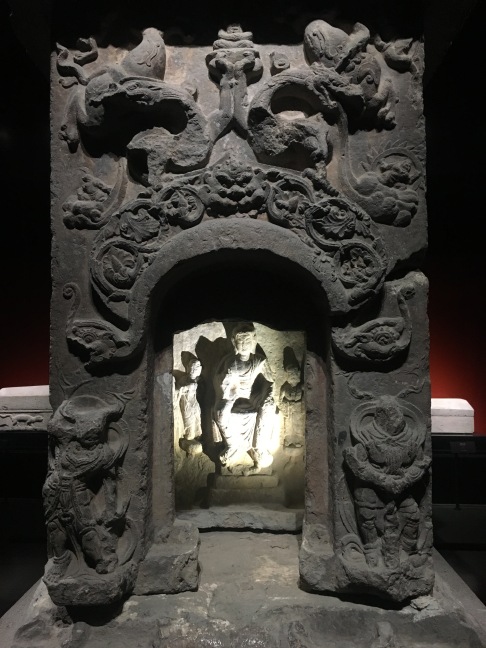 Gallery 2 is the Exhibition of Han Dynasty Pictorial Art. You are welcomed to the gallery by a pair of stone lions which look like they just realized that they left their office keys on the counter at home. 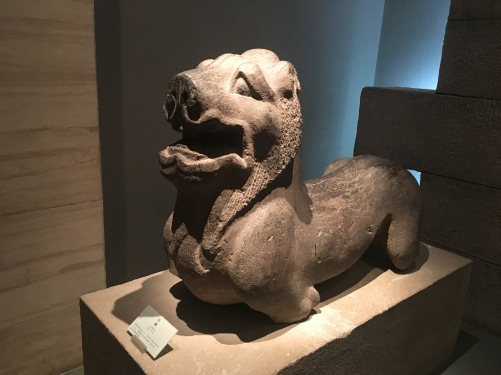 Stone lion, Eastern Han Dynasty (25-220 CE). An inscription on the lion’s neck reads “a pair of lions made by Liu Han outside the central east gate of Luoyang.”

The actual pictorial stones are architectural components of tombs, shrines and gate towers. Some are quite well-preserved and bold, others are faded by age and the elements and barely recognizable without an accompanying enhanced image.

A highlight of this section is a stone featuring a fantastic beast that would be at home in a Dungeons & Dragons adventure.  The bottom row of the relief shows a procession of animals leading a deer-drawn chariot holding an immortal, and apparently the overall design is a depiction of hope for an afterlife. 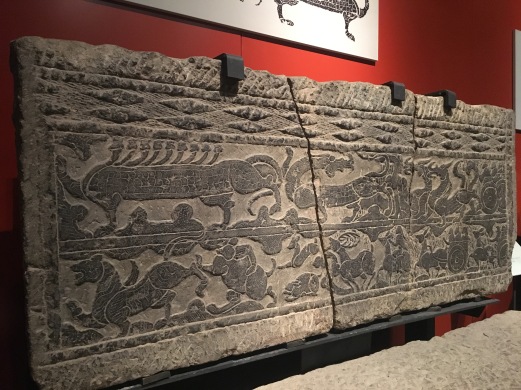 Some discoveries in the museum are quite recent. In 2007, excavations for a mall in Dongping uncovered an ancient cemetery with a number of tombs. One of these tombs contained painted murals which still retained a significant amount of color. Tomb No. 1 of the Easter Han Dynasty has its stones featured in the museum. 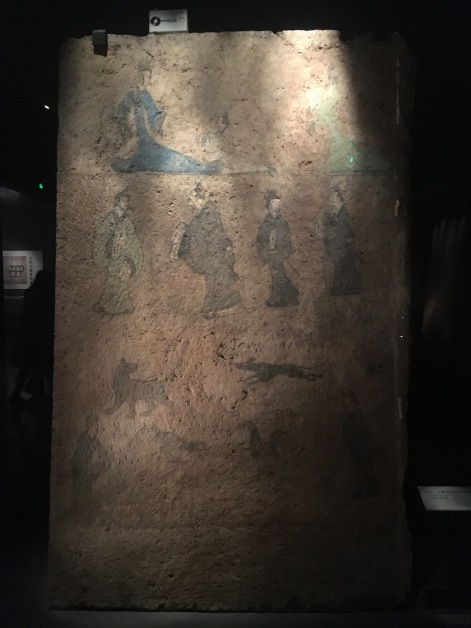 Mural from Dongping Tomb No. 1.

There are so many pictorial stones at the museum, but I will only highlight two more, the first of which features a recurring them among several. It depicts a meeting between two of the most famous Chinese philosophers in history, Confucius and Lao-Tzu (Laozi).

Image of Confucius meeting Laozi and the story of Lady Li, undated.

The story, which is possibly apocryphal, I summarize briefly. Confucius (the founder of Confucianism, obviously), visited Lao-Tzu (founder of Taoism) later in life. He was reportedly impressed by the wisdom of the man, and returned home describing him as a magnificent dragon.

The Lady Li mentioned on the stone could be one of many; without a date on the stone, it’s hard to determine which! There were a lot of ladies named Li of significance.  However, the image in the second row of what seems to be a dead cat or dog suggests it might be Consort Li, who legend says had her child, the future Emperor, swapped for a skinned cat in order to ruin her favor with the current Emperor.

The last stone I will show tells another fascinating pair of stories: “Image of Jizha Suspending Sword and Killing Three Swordsmen with Two Peaches.” 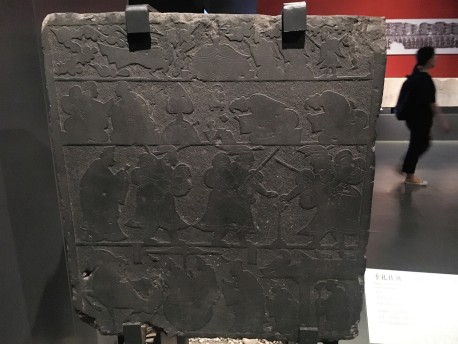 The first story, which I believe must be covered in the top panel or two of the stone, is the story of Jizha, fourth son of Shoumeng, king of the State of Wu during the Spring and Autumn Period (770-476 BC). Jizha famously declined to take the kingship three times during his life, and his humility and nobility is often regarded by the Changzhou people as the root of their own culture. In the story of the sword, Jizha passed through the state of Xu, where the king expressed admiration for Jizha’s sword. When he passed through the region again, Jizha learned that the king had died; he hung his sword from a pine tree near the grave of the king, a sign of respect.  He had not offered the king his sword in life, but would not allow the king’s death to free him from what he considered his duty.

The story of the three swordsmen apparently comes from the same era. When Prime Minster Yan Ying walked by a trio of generals one day, the generals refused to acknowledge his presence. Yan Ying was troubled by their disrespect and hubris, and told the King Jing Gong his concerns. The natural course would be to kill or assassinate the generals, but they were too skilled to directly attack.  Yan Ying suggested an unusual plan: offer two peaches to the best of the three warriors.  The three warriors argued over which of them deserved them the most, and even prepared to duel over them; however, they became shamed by their own arrogance and took their own lives. Thus three warriors were killed by two peaches.

The next gallery I visited in the museum was filled with painting and calligraphy; however, as there was even less information available on the details, and photography of them was difficult, I only share one representative painting.

One of the temporary exhibits there blew my mind, but did so just because I’m a Westerner!

The special exhibit on Ancient Egypt surprised me, though it took me a bit to figure out why! As an American, I’m used to mentally dividing the world into “old” and “new,” with China and Egypt being “old.” Of course Ancient Egypt is just as intriguing to modern Chinese people as it is to us, but somehow I hadn’t ever thought about it, because China already has its own “old” culture!

Not all Chinese art is old, of course. The first floor of the museum also had a special exhibition of modern multimedia Chinese art; below are a couple of examples.

Moving on to the second floor, I entered galleries featuring the Exhibition of the Cultural History of Shandong.  Here artifacts from prehistory up to almost contemporary times are on display, highlighting the incredibly long history and culture of the region. 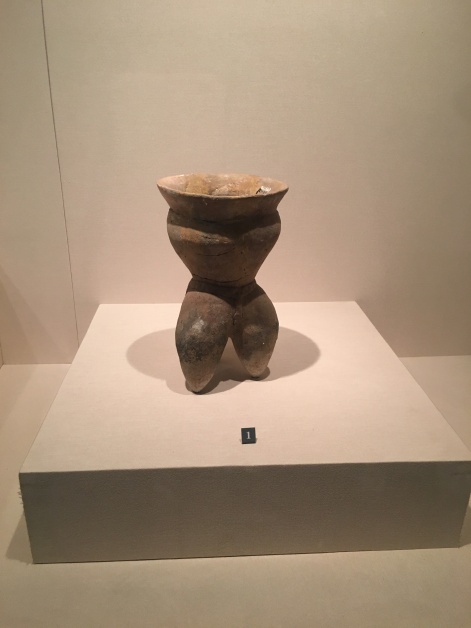 They have a lot of bronze pieces, which range from pretty to somewhat terrifying.

Food vessel from Shang Dynasty (1600-1046 BCE). Phoenixes are adorned beneath the rim. 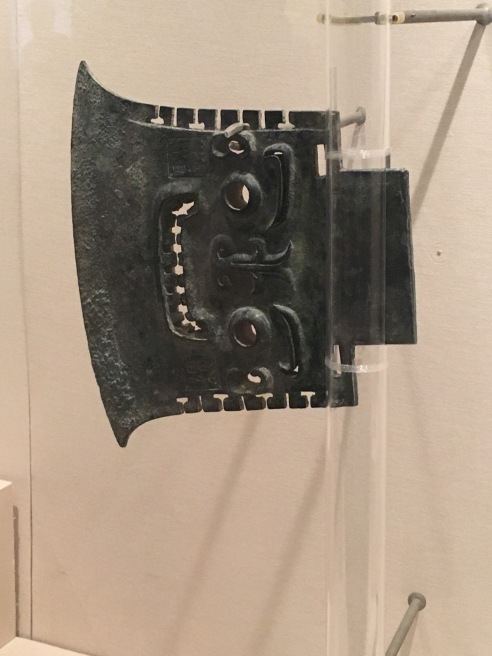 Later eras brought about innovations in colored pottery, such as this pot in the shape of a pair of fish.

The sophistication only increases, of course, as one gets closer to modern times. 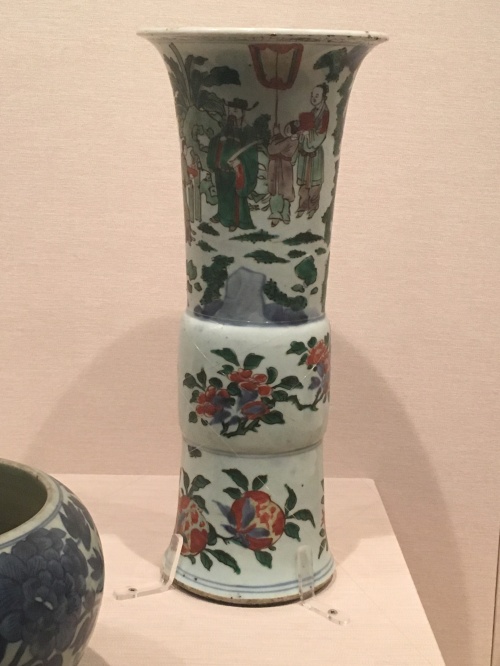 Those who know me or follow my blog a lot know why I had to include the following photo.

There were many other galleries to explore in the museum, though unfortunately their exhibit of jades was closed for the day, it seems. I did get to visit the Exhibition of Relics from the Ming Mausoleum of Zhu Tan, however, which contained many beautiful pieces. Zhu Tan lived from 1370-1389 CE, and was the tenth son of Zhu Yuanzhang, the founder of the Ming Dynasty. He died early in life of an “elixir overdose” and was buried in the southern foothills of the Jiulong Mountain. His mausoleum was excavated in 1970-1971, basically the same time I was born, and it unearthed a treasure trove of artifacts.

Nine-tasselled crown from the tomb of Zhu Tan. The cylinder is bamboo, the top is wood, and gold is used in the borders. 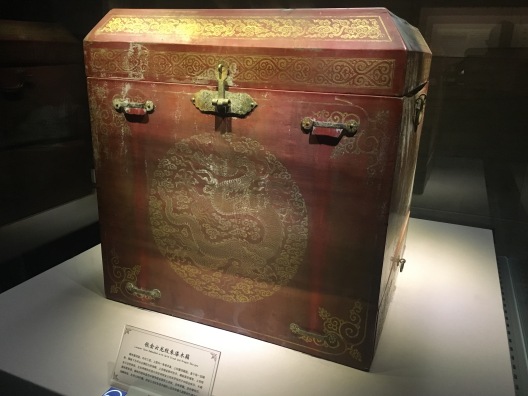 Red-lacquered chest with gold-inlaid cloud-and-dragon design, from the tomb of Zhu Tan.

Gem-inlaid gold buckle, from the tomb of Zhu Tan. The center is sapphire, surrounded by rubies, sapphires, cat’s eyes and turquoise.

The tomb also contained a lot of charming miniature furniture, of which the following photo gives a small taste.

Finally, in what I can only imagine is a small-scale replication of the Terracotta Army, the tomb contained a miniature wooden figurine representation of the prince’s honor guard. 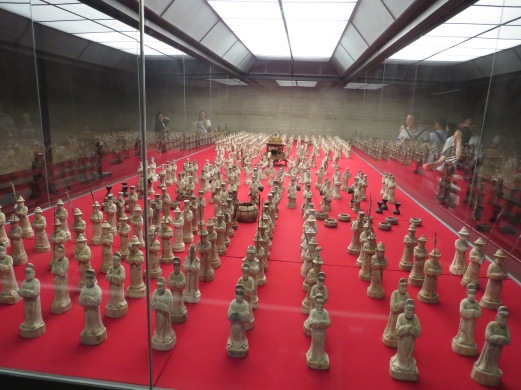 After this, I more or less wrapped up my museum visit, as it had been a long and overwhelming day! As it turned out, it was even more intense than I normally would have experienced — I stopped for a tea at the third floor shop and was given a free cookie in honor of it being “Museum Day,” which is why the crowds were overwhelming! I would return a week later on a weekday and found the same museum pleasantly deserted.

Let me conclude this post with one more shot of the magnificent museum ceiling, and the central hall of the museum.  It is a lovely museum, and well-worth visiting if you’re in Jinan, especially since it is free admission! However, be sure to bring your passport, because they check IDs of everyone entering. 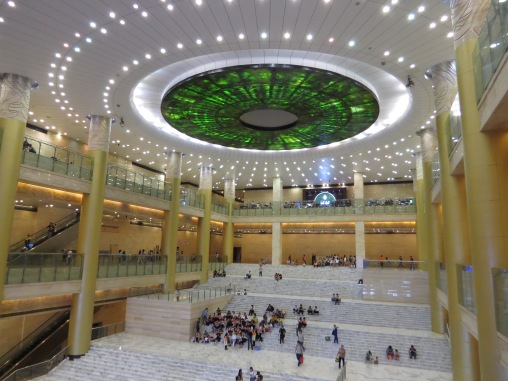 * A lot of my information about the artwork at the museum comes from the English translation of the Shandong Museum art book that I bought while there, and more information from the official website.