In the footsteps of Mythos… (updated)

Posted on August 23, 2007 by skullsinthestars

Howard Phillips Lovecraft (1890-1937) is one of the most influential horror authors people have never heard of. He was a direct inspiration to most of the leading horror voices of this generation, including Stephen King and Ramsey Campbell.

I’ll have plenty to say about H.P. in upcoming posts. It’s worth noting that he was influential beyond simply writing oodles of good horror — he also actively corresponded with many of his contemporaries, and that correspondence has been preserved and is a treasure trove of insights into the thoughts of the pulp writers of the time. I want to quote from one letter to Frank Utpatel, dated Feb. 15, 1937:

… So you read Bloch’s article on my formidable ways? Thanks very much for the coming shipment from your local necropolis… Oh, yes — I have a local supply of such delicacies, but I always like to try exotic specimens — as subtly flavoured by different kinds of churchyard mould. My chief Providence source is the hidden churchyard of St. John’s on the ancient hill just north of here — a spectral, sloping ossuary completely concealed from every public thoroughfare & with interments dating back to 1723. The adjacent stone church dated from 1810. Poe knew of this place, & is said to have wandered among its whispering willows during his visits here 90 years ago. Last August I shewed this place to two guests, & we all sat down on an altar-tomb & wrote rhymed acrostics on the name of Edgar Allen Poe…

Why do I mention this? Well, because the church and graveyard are still around, and I had the good fortune to visit them a few years ago while at a meeting in Providence (H/T to Personal Demon & friend, who actually had the idea to go). It’s well worth a stop, and is perhaps one of the most atmospheric locations I’ve ever visited. Pictures of the location seem to be scarce on the web; I’m disappointed I didn’t bring a camera with me.

Sadly, Lovecraft died only a month after the quoted letter was written, of intestinal problems.

Update: Personal Demon sent me a few ‘recovered’ pics of our visit to St. John’s; I post one below to show how nice it is: 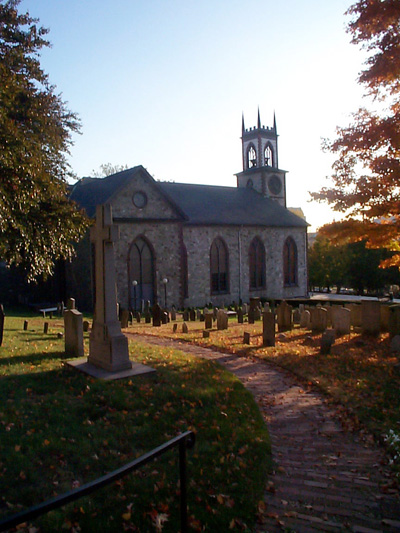 One of the pictures has the 2000 version of me in it. It took me a minute to recognize myself. Boy, I’ve changed…

This entry was posted in Cemetery, Fantasy fiction, Lovecraft. Bookmark the permalink.

6 Responses to In the footsteps of Mythos… (updated)