Posted on March 12, 2008 by skullsinthestars

My attention was recently drawn to this article (h/t Personal Demon and StumbleUpon) in Scientific American: a group of researchers have concocted a relatively simple way to generate an ‘event horizon’ in an optical fiber, analogous to those found in black holes. This technique may make it possible to study, on a tabletop, some of the more intriguing theoretical predictions about black holes. I give a brief description of the theory and experiment below the fold, plus a few observations…

First of all, it is to be noted that a number of news reports describing this work are misleading: the worst offender is the article titled “Artificial black hole created in lab”, by Physics World. This title is misleading in two ways: 1. This research has nothing at all to do with gravitation, the source of real black holes, so ‘artificial black hole’ is a misleading term, and 2. The researchers actually produce an optical analogue of a ‘white hole’.

The scientific paper is by T.G. Philbin, C. Kuklewicz, S. Robertson, S. Hill, F. König and U. Leonhardt, “Fiber-Optical Analog of the Event Horizon,” and appeared very recently in Science 319 (2008), 1367. For those with access, the journal article can be read here. It is worth noting that the title and abstract of the peer-reviewed work says nothing about ‘artificial black holes’, but only discusses creating an artificial event horizon: the exaggeration of an ‘artificial black hole’ is more a conceit of the media.

So what is an ‘event horizon’? Most people have at least a basic idea of what a black hole is: the remains of a massive star which has collapsed to a singular state of infinite density (a nice animation about black holes can be found here). Because the gravitational force increases, in principle without limit, the closer one comes to the central singularity, there is a distance from the center of the black hole beyond which even light cannot escape. Because the speed of light is the fastest anything can move, the distance at which light cannot escape represents an absolute ‘point of no return’ from a black hole. This point, or more accurately this region surrounding the black hole, is what we refer to as an event horizon.

A simple, easy to understand example of an event horizon (expanded upon from the Science article), can be found in fluid flow on a river. 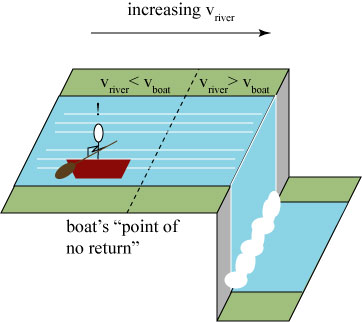 Near the waterfall, the speed of the river gradually and continuously increases. At some distance from the actual drop-off, the river speed will exceed the maximum speed of the boat, and the rower will be unable to escape an unpleasant fall. This distance is the boater’s personal ‘event horizon’ for the waterfall, and this model is a rough analogue of a black hole.

One can also envision a ‘point of no entry’ on the water. As a fast river empties into the ocean, the water speed continuously decreases as one moves away from the outlet. In trying to move up-river, the rower reaches a point where the water is flowing out faster than he can row, and he can go no further. This outlet is an analogue to a white hole:

The ‘event horizon’ for the boat is not a physical limit as much as an engineering limit, as it depends on the maximum speed one can propel the boat. A more physical event horizon is formed by looking at the boundaries which waves cannot cross. Water waves have a fixed speed relative to a stationary medium, and event horizons can be formed with respect to these wave speeds. Waves generated beyond the ‘point of no return’ cannot travel upstream at all, and will inexorably slide over the falls:

The dot indicates the point of wave generation, via a rock thrown into the water. The ellipsoids indicate the spreading of the wave at different times (this picture is more or less accurate; I’ll describe the mathematics that define the wave fronts in another post). Conversely, waves generated outside the ‘point of no entry’ at the river outlet will approach, but not pass, that point.

The experiment of Philbin et al. generates an event horizon in a fiber-optic cable using a nonlinear optical effect known as the optical Kerr effect. An intense laser field interacting with matter can change the optical properties of that matter, and in the case of the Kerr effect an intense laser field increases the refractive index of the material. The increase in refractive index is roughly proportional to the intensity of the light field, i.e.

is the `background’ refractive index,

is a constant of proportionality, and

is the intensity of the applied optical field at position z and time t.

where c is the speed of light in vacuum. If an intense light pulse is sent through an optical fiber, and followed by a ‘probe’ light signal, the probe signal will experience a local slowdown when it reaches the vicinity of the intense pulse. This is exactly what is done in the experiment, as illustrated below:

The next natural question to ask: how can we demonstrate that we actually have an event horizon in our fiber? To answer this, we look at what actually happens to the probe pulse when it gets ‘trapped’ at the white hole event horizon.

As it approaches, the probe signal slows down. The most advanced peaks of the probe will slow down as they approach the horizon, and the later peaks will catch up with them. The net effect is a compression of the probe wavelength and a corresponding increase in the probe frequency, or a blue shift, as illustrated below:

For a ‘perfect’ event horizon, this probe field would evidently be blue-shifted arbitrarily high. For waves propagating in a fiber, however, the change in frequency also results in a change of the probe speed through the process of dispersion. As discussed in the paper, this typically results in the probe lagging behind again and not accumulating any further shift. The net result is that part of the probe field arrives at the output of the fiber with a reasonably well-defined blue shift. This shift was observed in the experiments described in the paper.

Beyond the ‘coolness’ of the experiment, what is the motivation for doing this research? (Now we’re getting into astrophysics, which I’m not particularly familiar with and I will therefore rely more on external references.) In 1974, Stephen Hawking predicted, using a combination of quantum theory and general relativity, that black holes are not completely black, and radiate energy like a blackbody source. This radiation is now known as Hawking radiation. To quote Wikipedia on the origins of this radiation,

A more precise, but still much simplified view of the process is that vacuum fluctuations cause a particle-antiparticle pair to appear close to the event horizon of a black hole. One of the pair falls into the black hole whilst the other escapes. In order to preserve total energy, the particle which fell into the black hole must have had a negative energy (with respect to an observer far away from the black hole). By this process the black hole loses mass, and to an outside observer it would appear that the black hole has just emitted a particle.

Unfortunately, this radiation is probably not observable in real black holes; a black hole is much colder than the cosmic background radiation in the universe and a very weak radiator. Analogues to Hawking radiation should exist in any system with an event horizon, however, so a number of strategies have been proposed to create ‘event horizons’ in the laboratory.

What is not quite clear to me yet – and will require a bit more mathematical juggling on my part – is how pair production occurs in the classical system. The evasive answer is that the event horizon produces ‘negative frequency modes’ in the optical field, which can combine with existing positive frequency modes to produce photon pairs. I’m not sure exactly what this means! If they exist, these photon pairs should be observable, because their polarization can differ from that of the probe and soliton field.

I had one big question when I started to investigate this paper: how well does this classical wave event horizon mimic an actual black hole event horizon? Evidently pretty well; the first paper investigating this connection seems to be by W.G. Unruh, “Experimental black hole evaporation?” Phys. Rev. Lett. 46 (1981), 1351. In this letter Unruh shows theoretically that an acoustic event horizon could be constructed using transsonic fluid flow, and that this horizon is mathematically analogous to the horizon of a black hole.

A little personal note: I have actually met one of the authors (U. Leonhardt) a couple of times over the past five years, and I know that he has been interested in ‘optical black holes’ for at least that long. He is also the author of one of the original papers on ‘optical cloaking‘, a subject that I have to return to in the near future.

Some of the authors of the current ‘event horizon’ paper also have created event horizons in simple water tank experiments; the preprint of this work can be found on the arxiv.

3 Responses to Making optical ‘black holes’ in a laboratory?

Leave a Reply to Bindu A Bambah Cancel reply