In a previous ‘basics’ post, I discussed the three major branches of optical science. My specialty, physical optics, involves the study of the wave properties of light. In particular, there are three major phenomena in physical optics: interference, diffraction, and polarization. We’ve talked about the first two of these in earlier posts, and it is time at last to say some words about polarization!

In essence, “polarization” is a fancy way of saying that light is a transverse wave; with that in mind, we begin with a brief discussion of transverse and longitudinal waves.

This is a small experiment that you can do yourself if you have a traditional, coiled phone cord, such as pictured below: 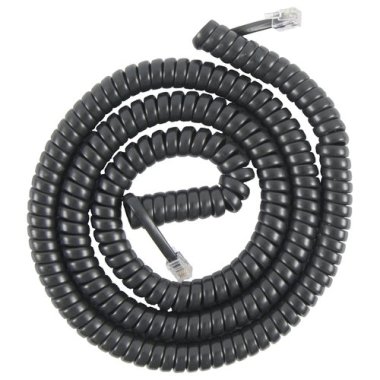 When the cord is stretched out, you can flick one end of the cord up and down, and send a wave along the cord as illustrated below:

This is a transverse wave; the wave is traveling to the right along the string, but the vibrations of the wave are moving perpendicularly to the direction of motion. We may also create a second, independent, transverse wave by flicking the end of the cord from left to right:

We may also create a completely different sort of wave by grabbing a handful of coils, pulling them, and releasing. Regions of higher and lower coil density travel along the cord:

This is a longitudinal wave; the vibrations of the wave move in the same direction that the wave is traveling.

A string or phone cord can support both longitudinal and transverse waves. Sound waves are longitudinal waves; the wave consists of regions of higher and lower air density compressing in the direction of motion. Light traveling in free space, away from any material boundaries, is a transverse wave: the electric field E and the magnetic field H of the wave oscillate transversely to the direction of motion and perpendicular to each other. An example of this is shown below:

The ‘active ingredient’ in light is the electric field. As discovered experimentally by Otto Wiener in 1890, the electric field is the component of light which is involved in chemical and material interactions. When we refer to the state of polarization of the light field, we are referring to the behavior of the electric field.

What sort of behavior are we referring to? Returning to the phone cord ‘model’, when we create waves on the cord by moving it straight up and down or straight left and right, we are creating a state of linear polarization: if we look at the cord head on, we find that the oscillations of the cord trace out a line. We can also excite the cord in a slightly different way: by moving our arm in a circular path, as if we’re turning a crank: 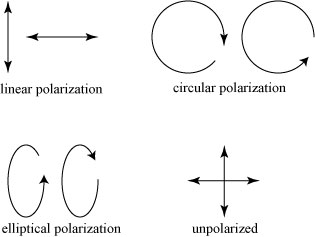 Polarization is not something we can easily observe with the naked eye (though some people are sensitive to it, a phenomena known as Haidinger’s brush). Natural light, produced by the Sun or an ordinary lightbulb, is unpolarized. In interactions with matter, however, light can become polarized, and there are a number of interesting effects and applications which can arise.

The discovery of polarization helped to convince early optics researchers of the wave nature of light. In 1669 the Danish mathematician Erasmus Bartholinus observed that light passing through a piece of Iceland spar (calcite) produced two images, in a phenomenon known as double refraction. An illustration of this (taken from Wikipedia) is shown below:

An exact understanding of this phenomena eluded researchers for quite some time. It fell to the versatile scientist Thomas Young to solve the problem; in 1803, he demonstrated that polarization phenomena result from the transverse nature of light. Along with this demonstration came a preliminary explanation of double refraction. Unpolarized light consists of a combination of two different polarization states (up/down, left/right). For a crystal such as calcite, the crystal structure results in one component of the polarization traveling faster than the other. Since refraction depends on the speed of a light wave, the result is that the two components of the polarization produce two different images.

One can convert an unpolarized light field to a linearly polarized light field by use of a polarizer. The simplest form of a polarizer consists of a fine grid of metal wires. For light which is polarized parallel to the wires, the light’s electric field induces electric currents in the wires which absorb and reflect the field. The other polarization, perpendicular to the wires, cannot excite such currents and passes freely through the polarizer. This is illustrated schematically below:

One common use of polarizers (though not wire ones) is in polarized sunglasses. The lenses of the sunglassses are made of a polarized material. The optimal orientation of the polarizers is such that they block horizontally-polarized light; the reason for this was discovered by Scottish scientist Sir David Brewster in the early 1800s. 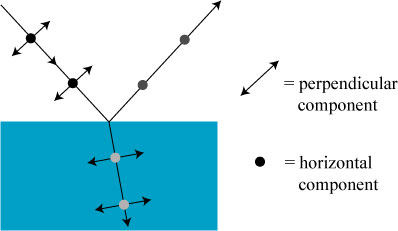 The practical consequence of this phenomenon is that when you observe light which has been reflected off a horizontal surface (a body of water, or the hood of a car) the light is mostly horizontally polarized. By designing polarizing sunglasses to block horizontally polarized light, one can block this unwanted glare. 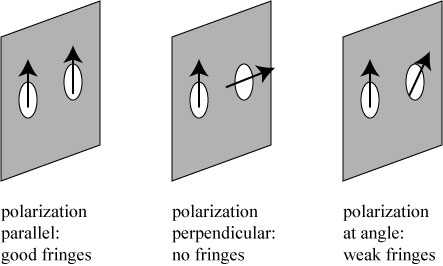 There is a lot more that can be said about polarization, but at this point any further discussion will go beyond the basics! I’ll try and return to other theoretical, and practical, considerations of polarization in future posts.

This entry was posted in Optics, Optics basics. Bookmark the permalink.