Turning a problem into a solution: aquatic clean energy from vortex-induced vibration?

Posted on December 6, 2008 by skullsinthestars

About a week ago, I came across an intriguing article on telegraph.co.uk, entitled, “Ocean currents can power the world, say scientists.”  Such a title is an immediate eyebrow-raiser for me, knowing the propensity of the news media to (a) overhype scientific results to the point of absurdity, and (b) fall for lots of suspicious “free energy” claims (see, for instance, Bob Park’s excellent book, Voodoo Science).  The work reported on here, though, undertaken by researchers in the Department of Naval Architecture and Marine Engineering at the University of Michigan, is based on legitimate science, and was recently published in the Journal of Offshore Mechanics and Arctic Engineering.

The researchers have developed a new device which can effectively extract energy from ocean and river currents, even at low flow rates.  The technique, dubbed VIVACE (Vortex Induced Vibration Aquatic Clean Energy), takes advantage of a physical phenomenon known as vortex induced vibration (VIV) to drive the motion of a cylinder.  This energy of motion is then converted to usable electric energy.

The phenomenon of VIV, its history, and its possible use as an environmentally-friendly and cheap energy source are discussed below.

(First, a little disclaimer: fluid dynamics is really outside of my field of expertise, and VIV is an extremely complicated topic in that field.  I’ve done my best to search the literature and understand exactly what’s going on, but undoubtedly I will be glossing over subtle details in my post.  Part of my motivation in blogging, however, is to force myself to learn about new topics, so here we go…)

What is vortex induced vibration?  In short, it is an effect by which little ‘whirlpools’ of fluid form in the wake of an obstructing object and regularly detach from it and are pulled downstream.   These vortices carry energy and momentum (or, more accurately, the fluid which they consist of carries it) and when a vortex leaves, the obstruction itself gets a little ‘kick’ of motion from its departure.  Vortices tend to leave the obstruction from opposing sides of it, and the net result is that the obstruction experiences an oscillatory force transverse to the direction of fluid flow.

Let us consider the behavior of a fluid (say, water) in the vicinity of a long cylinder oriented with its axis perpendicular to the flow of the water.  Water flowing along the surface of the cylinder will experience frictional forces and will generally move slower than water flowing outside this region.  There is therefore a ‘boundary layer‘ of slower-moving water running along the surface of the cylinder.  For low Reynolds numbers (Re<5), this effect is insignificant and the fluid flow around the cylinder is more or less uniform.  My way of describing it is that the fluid in the boundary layer is dragged forward by the surrounding fluid more than it is ‘held back’ by friction with the cylinder.  A rough picture of the flow would be as follows*:

When the Reynolds number increases (between 5 and 40), the boundary layer gets larger.  One ends up with a significant region of slower fluid flow around and behind the object.  The result is the formation of a pair of counter-rotating vortices immediately behind the cylinder (the yellow is the slower-moving boundary layer):

Why does this happen?  Roughly speaking, any shear flow layer (where fluid of different speeds flow next to one another) has vorticity.  If we imagine putting a tiny waterwheel right along the boundary, it will not only be pushed along by the flow, but it will start to spin:

For higher Reynolds numbers, the fluid flow has enough ‘oomph!’ to peel the vortices away from the cylinder and push them downstream:

These vortices detach from alternating sides of the cylinder and travel downstream, forming a ‘street’ of vortices.  Appropriately, this is now known as a Karman vortex street.  An image of an actual vortex street, via NASA, is pictured below:

To quote the NASA site:

This Landsat 7 image of clouds off the Chilean coast near the Juan Fernandez Islands (also known as the Robinson Crusoe Islands) on September 15, 1999, shows a unique pattern called a “von Karman vortex street.”

Here, the cylinder is replaced by Alejandro Selkirk Island (named after the true “Robinson Crusoe,” who was stranded here for many months in the early 1700s). The island is about 1.5 km in diameter, and rises 1.6 km into a layer of marine stratocumulus clouds.

As  we have already noted, these vortices give a departing ‘kick’ to the cylinder as they leave.  If the frequency of vortex departure is comparable to any mechanical resonance frequency of our cylindrical object, significant vibrations can be created.

In fact, such vibrations can cause considerable damage to structures, such as offshore oil platforms (surrounded by water flow) and tall smokestacks (exposed to significant air flow).  A lot of effort is put into minimizing the amount of VIV induced in a structure.  In fact, it was speculated that the Tacoma Narrows Bridge collapse in 1940 was due to VIV, though it is apparently established now that the real cause was another resonance effect known as aeroelastic flutter.

VIV manifests itself in less catastrophic ways.  Wind blowing against power lines or other wires can occasionally produce eerie sounds which are the result of VIV, known as Aeolian tones.  The romantic-era Aeolian harp, a wind-driven harp, is an application of this. 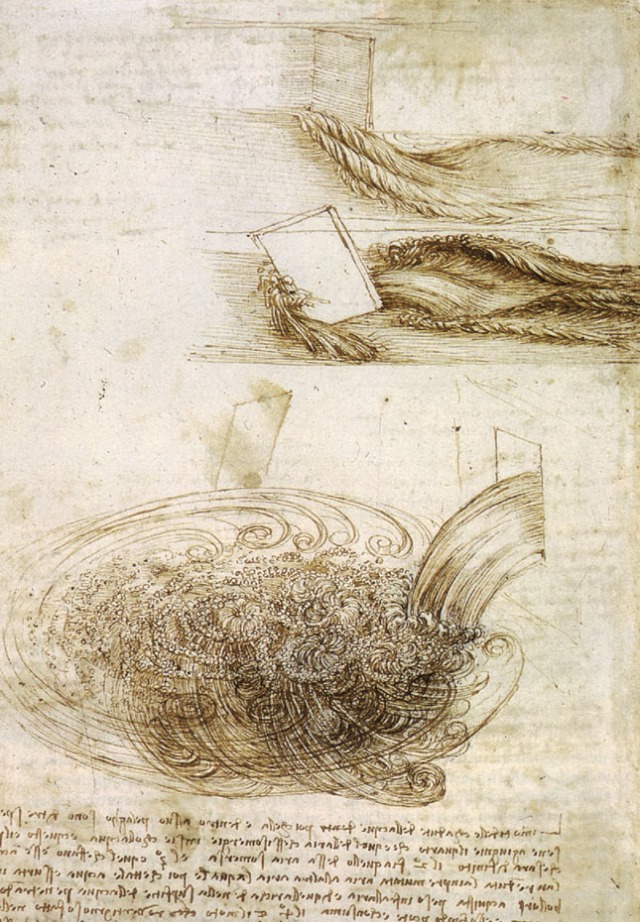 A later picture (1513), shows what seem to be the vortex streets created in the wake of obstacles (oh, and an old man): 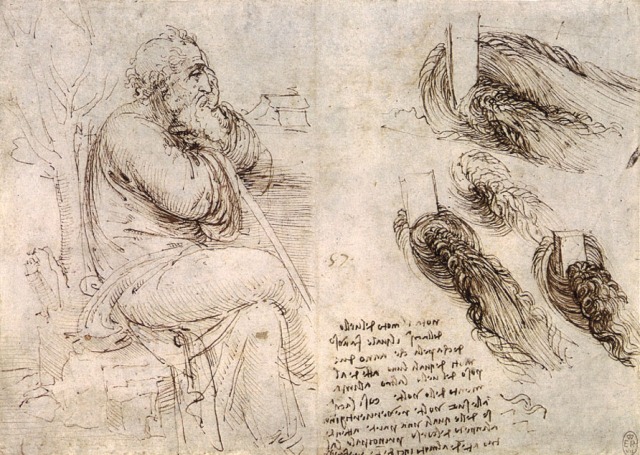 Let’s leave history behind and return to a discussion of VIVACE!  VIV turns out to occur for quite a large spread of Reynolds numbers, with the exception of some transition regions related to turbulence.  This prevalence of VIV means that engineers have traditionally had to worry about minimizing its effects in their designs, with the exception of the Aeolian harp.  The VIVACE engineers took the opposite view and looked to maximize VIV, and then find a way to extract the energy from the motion of the cylinder.  A gear-belt transmission system is used to convert the oscillatory motion of the cylinder to rotational motion of a generator shaft.  The cylinders used in the first VIVACE models were roughly 13 cm in diameter, a meter long, and 17 kg each. More details, summarized in the Telegraph article, are below:

The technology can generate electricity in water flowing at a rate of less than one knot – about one mile an hour – meaning it could operate on most waterways and sea beds around the globe.

Cylinders arranged over a cubic metre of the sea or river bed in a flow of three knots can produce 51 watts. This is more efficient than similar-sized turbines or wave generators, and the amount of power produced can increase sharply if the flow is faster or if more cylinders are added.

A “field” of cylinders built on the sea bed over a 1km by 1.5km area, and the height of a two-storey house, with a flow of just three knots, could generate enough power for around 100,000 homes. Just a few of the cylinders, stacked in a short ladder, could power an anchored ship or a lighthouse.

These statements suggest only some of the advantages of such a system over more familiar techniques for extracting energy from water flow.  Because the system operates even for small flow speeds, the system can be installed without needing an environmentally-disruptive dam. Because the system oscillates relatively slowly,  it would not pose a significant threat to sea life, unlike turbines.  The cylinders can be mounted on the sea floor, which means they would not pose an obstacle to waterway travel or produce a significant eyesore.  According to the VIVACE paper, the DOE (Department of Energy) and the CEC (California Energy Commission) have specified 8 requirements which a new ocean energy technology must satisfy, and VIVACE meets these requirements.

How important will this technology be?  The devil will be in the details, to be sure: plenty of things can go wrong in the ‘real world’ that don’t show up in a laboratory.  Right now a prototype device is being tested in the Detroit river, which will presumably highlight any potential pitfalls.  At the very least, though, this is a really cool idea!

* These figures are adapted from a 1966 bulletin by John H. Lienhard, “Synopsis of lift, drag and vortex frequency data for rigid circular cylinders.”

** Curiously, the VIVACE paper states that da Vinci first observed Aeolian tones, but they give no reference and the only confirmation I can find on the internet are articles quoting their paper!  Other sources suggest that da Vinci’s connection to VIV is, in fact, from his drawings, and that is the approach I’ve taken here.

This entry was posted in Physics. Bookmark the permalink.

4 Responses to Turning a problem into a solution: aquatic clean energy from vortex-induced vibration?