A. Merritt’s The Moon Pool

Posted on January 21, 2009 by skullsinthestars

Occasionally my random impulse buys at the bookstore turn out to be unusually fruitful!  After Christmas, I was looking to spend some of my gift card money and happened across a copy of A. Merritt’s The Moon Pool (1919): 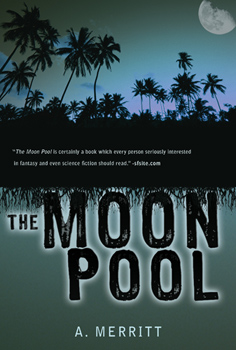 I had never heard of Merritt’s work before, even though he was an enormously successful author in the pulp era that I’m most interested in!  I’ve corrected that oversight, and I’m glad I did: his work is fascinating and well worth looking into.

The Moon Pool itself is billed in the Overlook Press edition of the book I have as “A forerunner to ABC’s Lost”.  We take a look at that claim, as well as the book itself, below.

First, let’s say a little bit about the author, Abraham Merritt (1884-1943).  Merritt was a successful journalist and newspaper editor, and could afford to extensively travel as a result of this success.  Fiction writing was only a sideline to him, but his works were extremely popular.  Most of them appeared first in serialized form in fiction magazines before being converted to book.  The Moon Pool, in particular, was originally a short story, which was followed by a much longer sequel, The Conquest of the Moon Pool, and these two parts were revised and joined together to make the book The Moon Pool.  It is one of Merritt’s earlier forays into the genre of science fiction/horror, and bears many similarities to the planet fantasies of Edgar Rice Burroughs, as we will see.

The book is narrated by Dr. Walter T. Goodwin, an American botanist.  It begins with his chance meeting of an old colleague, David Throckmartin, on a ship traveling from the islands of Indonesia to Melbourne.  Throckmartin is in a state of extreme agitation, and — after both men witness a horrifying supernatural being pursuing the ship in the moonlight — tells Goodwin his tale.

Throckmartin, along with his wife and several assistants, had decided to study a collection of mysterious and ancient ruins on the remote island of Nan-Matal.  The islands have a sinister reputation amongst the locals, who insist that it must be avoided during the nights of the full moon.  Indeed, camping on the neighboring island, Throckmartin and his colleagues hear strange noises coming from the ruins and one of their assistants has what can only be called a premonition of doom during the night.

They foolishly decide (“No!  Don’t do it!”) to investigate the ruins during one of these nights of the full moon, and are then thrust into unfathomable horror.  One by one, their party are abducted by an amorphous, immaterial being of light which emanates from a portal which opens in the wall of the ruins.  After the first member, Stanton, is taken, Throckmartin describes this light and its effect upon Stanton:

“His face shone with a rapture too great to be borne by living man, and was shadowed with insuperable misery.  It was as though it had been remoulded by the hand of God and the hand of Satan, working together and in harmony.  You have seen that seal upon my own.  But you have never seen it in the degree that Stanton bore it.  The eyes were wide open and fixed, as though upon some inward vision of hell and heaven!

The light that filled and surrounded him had a nucleus, a core — something shiftingly human shaped — that dissolved and changed, gathering itself, whirled through and beyond him and back again.  And as its shining nucleus passed through him Stanton’s whole body pulsed radiance.  As the luminescence moved, there moved above it, still and serene always, seven tiny globes of seven colors, like seven little moons.”

The survivors linger, night after night, trying to find some way to rescue their friends, and night after night they are taken, until only Throckmartin remains.  He flees the island to seek help, with the being (to be known as the Dweller) apparently in pursuit.  He tells his story to Goodwin, but Goodwin is unable to prevent Throckmartin meeting a horrible fate.

This ending is clearly more or less the ending of the original story The Moon Pool.  Those early chapters, through the chapter “Into the Moon Pool”, are wonderfully creepy and unusual and filled with a sense of cosmic horror of very much the sort Lovecraft would popularize.

The Conquest of the Moon Pool picks up with Goodwin’s return to the island in an attempt to rescue those lost.  Along the way, his ship picks up a boisterous Irish pilot named Larry O’Keefe and a brooding Norse sailor named Olaf Huldriksson, the latter of whom lost his family to the Dweller.  This trio make a pact to uncover the secret of the Dweller, and arrive at the island with scientific equipment intended to unlock the moon door.  There is some entertaining pseudo-scientific reasoning associated with this equipment:

“This much is sure–the moon door, which is clearly operated by the action of moon rays upon some unknown element or combination and the crystals through which the moon rays pour down upon the pool their prismatic columns, are humanly made mechanisms. So long as they are humanly made, and so long as it is this flood of moonlight from which the Dweller draws its power of materialization, the Dweller itself, if not the product of the human mind, is at least dependent upon the product of the human mind for its appearance.”

“Wait a minute, Goodwin,” interrupted O’Keefe. “Do you mean to say you think that this thing is made of–well–of moonshine?”

“Moonlight,” I replied, “is, of course, reflected sunlight. But the rays which pass back to earth after their impact on the moon’s surface are profoundly changed. The spectroscope shows that they lose practically all the slower vibrations we call red and infra-red, while the extremely rapid vibrations we call the violet and ultra-violet are accelerated and altered. Many scientists hold that there is an unknown element in the moon–perhaps that which makes the gigantic luminous trails that radiate in all directions from the lunar crater Tycho–whose energies are absorbed by and carried on the moon rays.

“At any rate, whether by the loss of the vibrations of the red or by the addition of this mysterious force, the light of the moon becomes something entirely different from mere modified sunlight–just as the addition or subtraction of one other chemical in a compound of several makes the product a substance with entirely different energies and
potentialities.

The reference to the ‘luminous trails’ of Tycho refers to what are more commonly referred to as rays emanating from the lunar crater named after Tycho Brahe (image from the Lunar and Planetary Institute): 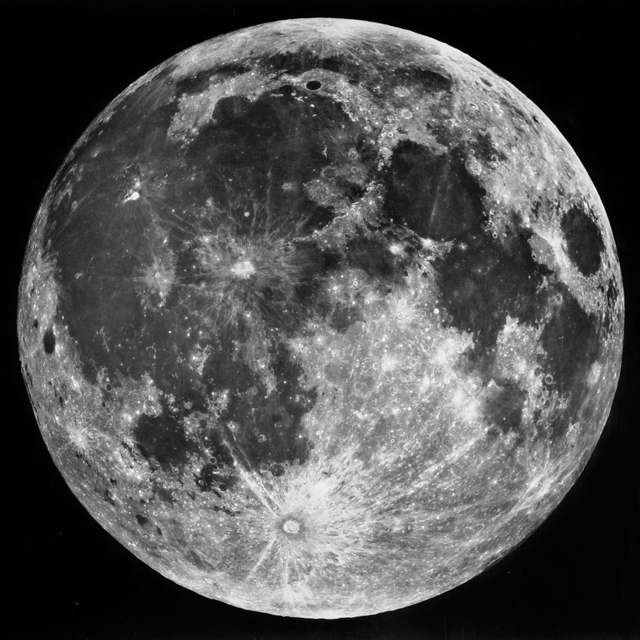 Tycho is the big crater at the bottom of the image.  I have been unable to find any scientific speculation from that era concerning mysterious elements in Tycho, but I’m still looking!  Merritt, however, was apparently a big fan of the idea of mysterious elements in non-terrestrial bodies.  In another book (to be discussed in a future post), he uses “Coronium” as a plot device.

The trio manages to open the gate of the Dweller, but a misunderstanding traps them behind the door with a hostile Russian scientist named Marakinoff — and the moon pool from which the Dweller will inevitably emerge.

A vision of a beautiful woman, and her odd anthropomorphic frog-like companion, guides the newly-formed quartet to a secret door, which in turn leads them to an underground world.

From this point on, the story devolves into a rather ordinary “planetary romance” of the style of Edgar Rice Burroughs and Otis Adelbert Kline.  The underground world of Muria is divided into two religious groups, at a very uneasy peace: the humanoid and rather evil worshippers of the Dweller (known as The Shining One to them), and the the frog-like worshippers of a mysterious trinity known as The Silent Ones.  The story contains all the elements of the pulp fantasies: a daring escape from the worshippers of the Dweller, a lovely heroine (the human servant of the silent ones, Lakla, whom O’Keefe takes a fancy to), horrifying beasts, unusual weaponry, and a final conflict between good and evil.  This final conflict even includes one of the worst tropes of fantasy fiction, which can be summarized as, “Only love can defeat them!”

The story loses much of the impact of its introductory scenes, though there are occasional glimmers of horrifying brilliance (the undead army The Shining One musters against its foes being a great example).   The peak, though, is definitely the early parts of the book which formed the basis of the short story.

I was pleased to note that my opinion coincides with that of H.P. Lovecraft, who was an avid reader of Merritt’s work and was possibly inspired by him (and, as we will see in a later post, vice versa).  In a letter to Richard Ely Morse, May 21, 1934, he notes:

Merritt is certainly great stuff — he has a subtle command of an unique type of strangeness which no one else has been able to parallel.  You are absolutely right in considering his original Moon Pool novelette — as published in the All-Story for June 22, 1918 — his best work.  The sequel — The Conquest of the Moon Pool — was relatively commonplace and tainted with the atmosphere of cheap popular fiction.  It is a major crime that many of the best touches were taken out of the novelette when it was fused with its sequel to form the ultimate book version.

But what of the connection to Lost, which has its season premiere tonight?  I remain somewhat skeptical, as the relationship seems rather superficial.  It is true, as noted in the new introduction to the book, that both tales have an amorphous monster, a mysterious tropical island, and an international cast of characters (including a sneaky Russian) who pontificate upon the relationship between science and religion.  Most of The Moon Pool, however, is pure pulp adventure which bares little resemblance to the popular show.  Could it have been an inspiration?  Sure.  But those turning to The Moon Pool for more of that Lost feeling will probably be disappointed.

The Moon Pool stands as a classic in its own right, however, albeit a somewhat flawed one.  I have a much better opinion of Merritt’s later work, The Metal Monster, which I will discuss in an upcoming post.

For those interested in reading The Moon Pool, but reluctant to buy a copy, it can be read via Project Gutenberg.

This entry was posted in Horror, Lovecraft, Weird fiction. Bookmark the permalink.

5 Responses to A. Merritt’s The Moon Pool