Francis Stevens’ The Nightmare and Other Tales of Dark Fantasy

In my readings for this blog, I am constantly surprised by how many truly excellent authors and works of weird fiction have been (mostly) lost in the passage of time.  Fortunately, a number of publishers have valiantly taken up the cause of bringing these forgotten works back into the public eye, and I’ve talked a quite a bit about Valancourt Books, Wordsworth Mystery and Supernatural, and Paizo Press.  I should probably add to this list Bison Books, an imprint of the University of Nebraska Press, which a few years ago produced an edition of Francis Stevens’ short stories, titled The Nightmare and Other Tales of Dark Fantasy: 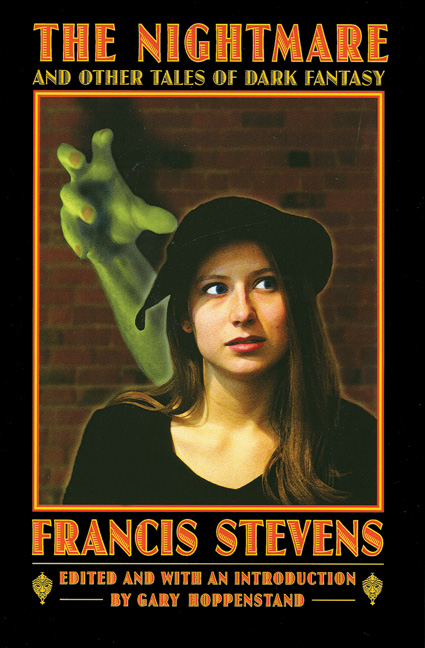 Francis Stevens was the pseudonym of Gertrude Barrows Bennett (1883-1948), who wrote a number of novels and short stories between 1917 and 1923.  She is credited in the Bison Books edition as being “the woman who invented dark fantasy”, and with good reason: though the tales in the book are uneven in their plot and character development at times, they present a truly dark vision of the world that has obvious influences on such luminaries as H.P. Lovecraft and A. Merritt, as we will see.

“Dark fantasy” itself is a rather difficult genre to describe, and falls somewhere in that nebulous realm between horror and fantasy stories.  Horror tales set in contemporary times which possess elements more commonly associated with fantasy, as well as fantasy stories with a very dark tone, are both given the label.  In any case, the late 1800s/ early 1900s was an era when horror fiction was finally breaking away from the Gothic tradition and finding new paths to take.  Though it is a bit of an oversimplification, authors still tended to place their horrific tales in a universe of well-ordered and comprehensible rules; my impression is that Stevens formed a bridge between these classic tales and the later tales of “cosmic horror” by Lovecraft and others.

Stevens was not a prolific writer, and The Nightmare contains nearly all of her short story output, though several of the tales are better classified as novellas.  The stories may be summarized as follows:

Stevens was not a terribly polished writer, as one might expect from her limited output and the fact that she was spending most of her time caring for her invalid mother.  Both The Nightmare and The Labyrinth, for instance, have characters whose motivations and moods bounce around like ping pong balls in a blender.  These longer tales are often weighed down by a lot of this excessive “random walk” character development.  If one can put this aside, though, the ideas presented are quite compelling.  In particular, the weird labyrinth of The Labyrinth, the lurking evil in Serapion, and the haunted city of Sunfire (and its truly creepy monster) are beautifully presented and well worth reading.  The other stories are also good, though I found Friend Island and The Elf Trap to be those with the least to offer.

As I noted, I almost feel that one can view Stevens as a “transitional” author between the “lawful universe” authors that came before her and the “nihilistic universe” authors such as Lovecraft which found inspiration in her work.  Stevens often seems to feel that the audience needs to be let “off the hook” by the end of stories, with some sort of deus ex machina intended to allow the reader to breathe a sigh of relief.  To a modern reader, the sigh is usually more a sigh of disappointment, but Stevens is “transitional” in that she usually does not let the reader entirely off the hook: the horror is ratcheted back, but never completely to zero.

The stories were a definite influence on the authors who followed Stevens, and possibly an influence on writers decades later.  Lovecraft’s From Beyond (1920) is jaw-droppingly similar in theme to Stevens’ Unseen–Unfeared (1919): in both tales, a mad scientist reveals a horrifying hidden menagerie to a more or less unwilling spectator.  Lovecraft’s In the Walls of Eryx (1936) might have been inspired in part by The Labyrinth (1918); in both stories a diabolical maze is designed whose whole purpose is to trap and kill its victims.  It seems reasonable that A. Merritt’s The Moon Pool (1918) may have been influenced by Stevens’ The Nightmare (1917); both stories feature mysterious tropical islands populated by mysterious beasts.

I noted in my review of The Moon Pool that the publisher of the most recent edition suggests that Merritt’s story may have served as an inspiration for the television series “Lost”.  One could make an even stronger case, however, that “Lost” was inspired by The Nightmare!  Both “Lost” and The Nightmare feature characters on oceanic trips who inexplicably find themselves washed ashore on a mysterious tropical island.  Both tales feature competing factions vying for control over the island’s resources.  Then there’s the curious scene in The Nightmare in which an expedition, exploring the island, are charged by a bear-like creature which they are able to disperse with a lucky shot.  Compare that with this scene from “Lost”.  There are other similarities; personally, I doubt that The Nightmare was the true inspiration for “Lost”, but the coincidences are striking.   I should point out, though, that no secrets about the television show will be revealed by reading the book!

Consciously or not, one can see how other modern horror follows many of the same ideas that Stevens implemented long ago.  The idea of a deadly, ever-shifting maze featured in The Labyrinth would be used quite effectively in the 1997 horror movie Cube and in Brian Lumley’s excellent 1990 book The House of Doors.

Stevens was not without her own influences, however.  Behind the Curtain is obviously a story in the style of Edgar Allen Poe’s psychological thrillers, and quite well done.  The Nightmare and Sunfire read very much like the style of pulp adventure that Edgar Rice Burroughs championed.

The Nightmare and Other Tales of Dark Fantasy is a collection that most fans of classic horror will want to indulge in.  I’ve already got a copy of Stevens’ novel The Citadel of Fear, and will report on it in the near future…