Welcome to the 13th edition of The Giant’s Shoulders, the history of science blog carnival!  This carnival marks the one year anniversary since its inception, so I thought I’d take us somewhere special and historical — the fair! Not just a county fair, not just a state fair — but a World’s Fair! Specifically, the 1893 World’s Columbian Exposition: 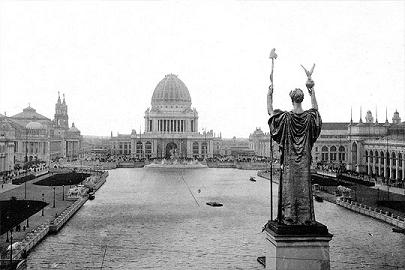 The Columbian Exposition holds a special place in my heart: it was the first World’s Fair in Chicago,  and it was held on the very spot I spent my undergraduate years.  A number of other things made their first appearance at the Fair:  Nikola Tesla’s alternating current electrical system was unveiled in its first large-scale demonstration to illuminate the fair, and the world’s first Ferris Wheel was constructed there.

To celebrate the 1-year anniversary of the carnival, I’ve seized control of the various exhibit halls of the Columbian Exposition to present this month’s carnival entries!

(If you’re still not in a fair mood, this classic MST3K short might help.)

If you get lost, feel free to check the map!

Our first stop is the Transportation Building, designed by architect Louis Sullivan:

The Last 100 years: 1969 and the Final Frontier: In the same building, Ethan Siegel of Starts With A Bang reflects upon one of rocketry’s, indeed one of humanity’s, finest moments: the landing of the first men on the moon!

Stepping out of the Transportation Building, we head deeper into the fair and make a stop at the Horticultural Building, designed by W.L.B. Jennie and W.B. Mundie: 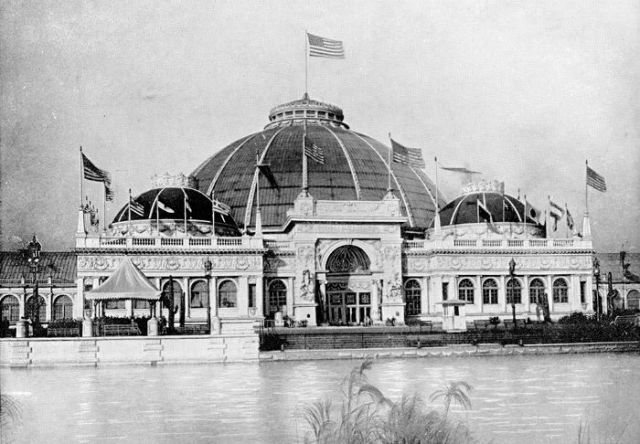 The Grassroots of Scientific Revolution: A horticultural exhibit seems like an appropriate place to study the ‘grassroots’ of scientific revolution!  Eric Michael Johnson of The Primate Diaries discusses how, starting in the 1520s, working-class values combined with the rejection of authority inspired the scientific method in medicine — and beyond!

We continue on from the Horticultural Building and pass onto the wooded island in the lagoon, where we stop for tea at the Japanese Ho-o-den:

There’s no science here; we just needed to rest!

Crossing the lagoon, we pay a visit to the Fisheries Building, designed by Henry Ives Cobb:

Twisting the cuttlefish: In the fisheries building, we find an exhibit by Brian Switek of Laelaps, who explains how an innocent little 1830 paper on cuttlefish was blown up into an architeuthis-sized controversy!

Dodging the Government Building, we pass on to the largest of the fair: the Manufactures and Liberal Arts Building, which is big enough for two entries: 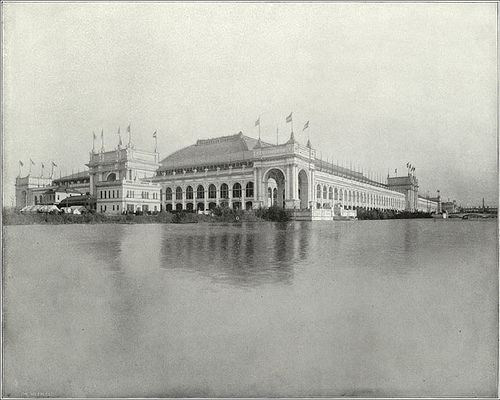 Classics in Materials Science: Shockley and Read’s dislocation models of crystal grain boundaries:  In an entry that somehow got left out of last month’s carnival, Guru of Materialia Indica describes how, in 1950, Reed and Shockley did groundbreaking work in applying a model of the surface defects in crystals to calculate the energy of the defects.

Wisps of Metal, Whispers of History:  Everything old is new again! Recent research showing that very small amounts of contaminants can significantly alter a chemical reaction reminded Carmen Drahl of C&ENtral Science of  classic experiments in the 1980s.  The insight gained in the earlier experiments turned a seemingly erratic set of chemical reactions into ones which are now reliably used for building molecules.

Outside of the Manufacturing Building, we find ourselves at the end of the Central Basin of the fair.  We stop to admire The Statue of the Republic and the Peristyle behind it:

Walking along the Basin, we come to the Machinery Hall, designed by Peabody and Stearns:

The ‘machinery’ we’ve stocked it with, however, is the very machinery of the universe, presented by Ethan Siegel of Starts With A Bang!

The Last 100 Years: 1948, Gamow, and The Bang: Here we learn how the Big Bang exploded onto the scientific scene, blowing away the previously dominant steady-state theory.

The Last 100 Years: 1950s & The Tragedy of Fred Hoyle: Though the Big Bang was quickly well-accepted, Fred Hoyle was a holdout for the steady-state theory.  In this post we learn how, in spite of his great achievements, this stubbornness cost him greatly.

The Last 100 Years: 1979 and Before the Big Bang:  Not content with accepting there is a Big Bang, in the late 1970s one scientist decided to look back earlier, at the causes of the bang!

Crossing the main courtyard of the fair, we finally enter the overwhelming Electricity Building, by Van Brunt and Howe:

Lord Rayleigh vs. the Aether! (1902): Dazzled by Nikola Tesla’s electric devices, you are unprepared when I drag you aside to tell you about a little-known experiment performed in the days before Einstein’s relativity.  Lord Rayleigh, one of the preeminent physicists of his era, attempted to measure the hypothetical length contraction that Lorentz postulated must arise in the aether.

Escaping my verbose lecturing, you duck into the neighboring Mines and Mining Building, designed by Solon Spencer Beman:

Under a Dark Star: What better place is there than a building dedicated to mines to have a discussion of some of the darkest objects in the universe?  Jennifer Ouellette of Discovery Space: Twisted Physics introduces us to the true “father” of black holes research, whose work appeared in 1783!

With the large exhibit halls out of the way, it’s time for some fun!  We proceed out of the center of the fair and to the exotic Midway: 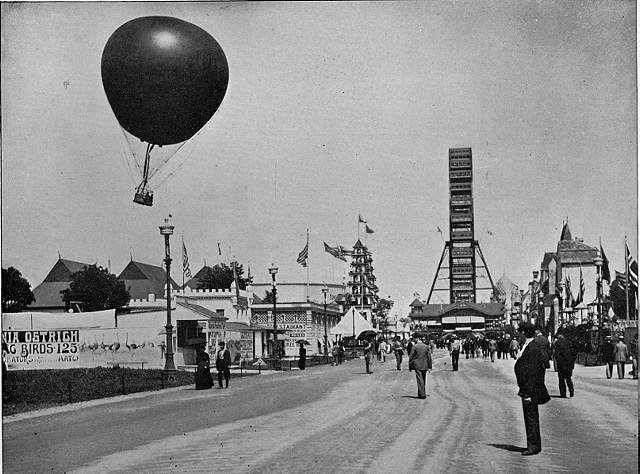 Though the Ferris Wheel is obviously the center of attention, another building catches your eye, the Zoopraxographical Hall, in which moving pictures of animals were shown using a zoopraxiscope:

Darwin and the “mega-theria” of Patagonia:   Here Brian Switek of Laelaps describes how Darwin’s ideas about the birth and death of species arose in the study of fossilized Megatherium.

With the day growing late, we finally take a ride on the massive Ferris Wheel: 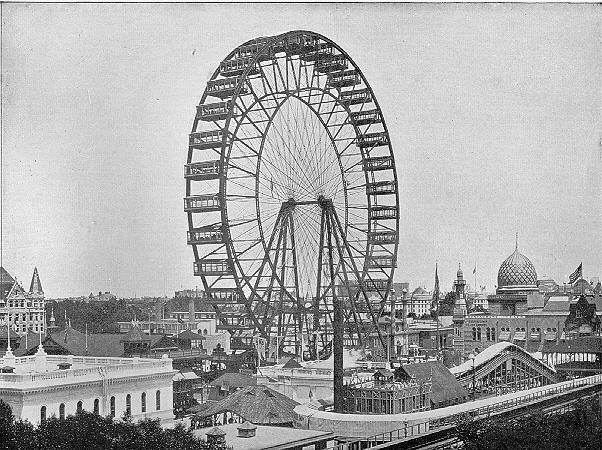 The Starry Messenger What it Said and What that Really Meant!:  Soaring up into the sky, we find it a perfect time for Thony Christie of The Renaissance Mathematicus to tell us about Galileo’s first book on his astronomical observations, Sidereus Nuncius, and how they influenced astronomical thought and humanity’s worldview.

Well, we’ve had a full day at the Blog Fair, and the Sun has set, leaving us with little time:

Clock Tutorial #3c – Darwin On Time: Speaking of time, we have just enough time for Coturnix of A Blog Around The Clock to tell us about Darwin’s thoughts on the adaptive function of biological clocks (it’s a reprinted post, but I wanted to include it, because it’s great!).

This concludes this special 1-year anniversary edition of The Giant’s Shoulders!  Next month, look for the carnival to take place at The Dispersal of Darwin!

For those interested in reading more about the Columbian Exposition, I can highly recommend the book The Devil in the White City, by Erik Larson, which simultaneously tells the story of the creation of the fair and of a serial killer who stalked his victims around it.

This entry was posted in General science, History of science. Bookmark the permalink.