Posted on September 9, 2009 by skullsinthestars

This result came out a few months ago, and I’ve been looking for the time to write about it ever since: in a paper published in the June 5 issue of Science, scientists reported the discovery of the first natural quasicrystal!

Of course, in order to get excited about this result, one needs to know what a quasicrystal is!  In this post, we’ll take a look at what we mean by the terms ‘crystal’ and ‘quasicrystal’, and then explain why the discovery of a natural quasicrystal is significant.

A crystal is a solid whose constituent atoms or molecules are arranged in a regular, repeating structure.  For instance, a simple cubic crystal has atoms arranged on a cubic grid; a part of a cubic crystal is illustrated below:

Such a structure is said to be periodic; moving in a straight line through the crystal, we regularly pass through points which are indistinguishable from our starting position.  In a rectangular crystal, we can characterize this by introducing periods along the axes of the crystal; for instance, in a two-dimensional rectangular crystal can be characterized by the numbers

A quasicrystal is a structure that has long-range order but is nonperiodic.  That is, there is a strong relationship between distant points of the structure even though the structure itself never repeats!  To illustrate how this is possible, we consider a simple model of “one-dimensional crystals”, which we illustrate using colored blocks:

More generally, suppose we overlap two crystals, one with period L and one with period NL/M, where N and M are integers and the fraction N/M is reduced.  One can reason that the combined pattern only repeats itself when N periods of the first crystal, or M periods of the second crystal, have passed.  In this way we could make a pattern with a very large combined period, for instance if the second period is 999L/1000!

is an irrational number, which cannot be written in the form N/M.  This means that a crystal made with the combined periods L and

will never exactly repeat itself1; a crude simulation of this is shown below: 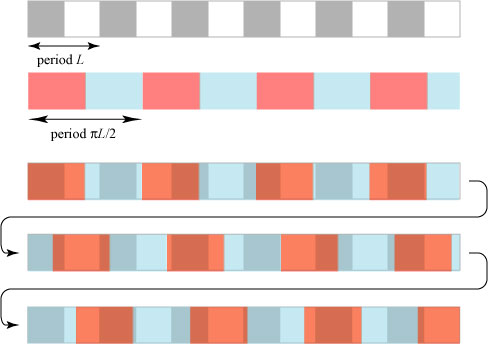 This is what we might call a one-dimensional quasicrystal.  It is nonperiodic — it never repeats — but it definitely has long-range order: knowing the two periods L and

, and the point at which we begin, we can predict the behavior of the crystal at all points along its length.

This example is somewhat unsatisfying, because it depends upon having a ratio of periods exactly equal to an irrational number.  Looking at higher-dimensional problems, such as a 2-D crystal or a fully 3-D crystal we may ask: can one construct a nonperiodic structure with long-range order in such cases?  For quite some time it was generally assumed that long-range order and periodicity went hand-in-hand, but in 1974 mathematician and physicist Roger Penrose published a paper2 titled, “The Rôle of aesthetics in pure and applied mathematical research,” in which he showed that one can tile a surface nonperiodically using only a few shapes which are arranged according to a strict set of rules!

The shapes used in the original “Penrose tiling” are shown below: 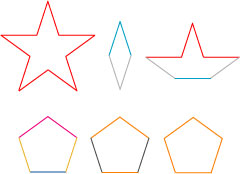 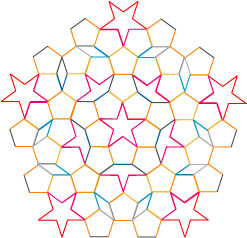 I specifically made a pattern which would have 5-fold symmetry; that is, it looks the same if it is rotated through its center by 1/5 of a circle.  One can in fact make even simpler nonperiodic tilings with only two pieces and an appropriate set of rules.

This tiling is nonperiodic, though this is difficult to prove rigorously.  The pattern drawn above, however, gives a hint as to how this can be shown — the pattern drawn above is a symmetric pentagon, which means that it is simply a larger version of the original tile piece:

In order to create a periodic structure in two dimensions, we would need to be able to put our six pieces together in such a way as to make a shape that could be used to tile the entire plane without leaving any gaps.  However, one can show that the six pieces are inevitably assembled into larger versions of themselves!  These larger pieces can only be put together to make even larger pieces, and so on.   By induction, we cannot combine them in a way to make a regularly repeating structure.

In three dimensions, similar nonperiodic tilings can be found, albeit ones which are much more complicated.  The first physical quasicrystal was reported in 1984 by Shechtman and collaborators in a paper3 titled, “Metallic phase with long-range orientational order and no translational symmetry.” The term “quasicrystal” was coined soon afterwards in a theoretical paper describing the essential properties of such materials4.

Schechtman et al. studied alloys of Al-Mn which had been formed by quenching (rapid cooling).  They discovered a quasicrystalline structure with icosahedral symmetry; that is, the crystal has a structure with symmetry properties comparable to a twenty-sided die:

(This particular die was auctioned at Christie’s last year and dates from 2nd century Rome.)

The icosahedron axes of symmetry can be defined as follows:

No ordinary periodic crystal can have five-fold symmetry, though crystals occasionally “fake it” in a phenomenon known as “twinning“.

After the groundbreaking discovery of Shechtman and collaborators, a large number of quasicrystals were made artificially in the lab using a variety of different materials.  All observed quasicrystals were synthetic, however, and no such materials had been found in nature; it was a logical next step for researchers to begin to hunt for natural versions of such crystals.

An organization known as the International Center for Diffraction Data has a large collection of diffraction data for a variety of materials, including some 9000 naturally occurring minerals.  A search of the diffraction data for these materials, however, turned up no new quasicrystals, which led researchers to examine more exotic materials which have not been catalogued.

One candidate was the mineral khatyrkite, (Cu, Zn)Al2.  This mineral is apparently very rare and is found in a region of the Koryak Mountains, northeast of the Kamchatka Peninsula in Russia.  However, khatyrkite’s chemical composition is similar to that of known artificially-made quasicrystals, which made it a reasonable choice for study.  In a paper published in Science in June of 2009, researchers L. Bindi, P.J. Steinhardt, N. Yao and P.J. Lu find that the sample of khatyrkite indeed possesses regions of icosahedral quasicrystalline behavior.

This discovery shows that quasicrystals can be formed naturally, and it significantly expands the list of naturally occurring mineral structures.  The discovery of other natural quasicrystals could help researchers in determining other quasicrystalline structures and new techniques for constructing them.

One curious thought: given that khatyrkite is currently the only natural quasicrystal known, and samples of it are quite rare, is it now a valuable collector’s item?  It would seem that, for the moment,  it  is one of the rarest materials on Earth…

This entry was posted in Physics. Bookmark the permalink.

5 Responses to Quasicrystals… now all natural!