Boo! The optics behind “ghost” imaging

Posted on October 31, 2009 by skullsinthestars

Halloween seemed like the perfect time to talk about an unconventional sort of optical imaging, referred to as “ghost” imaging.  I should point out at the beginning, however, that I’m not talking about this sort of ghost imaging:

Don’t get too disappointed, however!  Ghost imaging is in fact a fascinating and relatively new technique in which a detector can produce an image of an object that it cannot see!  The physics behind this effect is somewhat subtle, and resulted in at least one minor controversy since its introduction.  Let’s take a look at it…

The first experiments on what would eventually be referred to as ghost imaging were reported in 1995 in a paper titled, “Optical imaging by means of two-photon quantum entanglement.”1 A simplified schematic of the experiment is illustrated below:

Laser light falls onto a nonlinear optical crystal — beta barium borate (BBO) — which splits each photon into two quantum-mechanically entangled photons of orthogonal polarization (more on this in a moment), referred to as the signal and idler photon.  These photons pass through a polarizing beam splitter, which sends the signal photon up towards the object to be imaged and the idler towards the CCD camera that will image it.  The object is an absorbing screen with a pattern of apertures to be imaged: 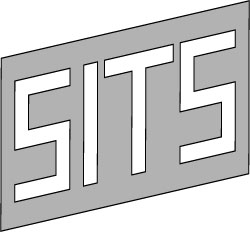 (Researchers usually use the abbreviation of their university as an object; here, I use my blog abbreviation.)

The signal photon either hits the screen and is absorbed, or it passes through an aperture and is detected by a bucket detector which — and this is important — only measures whether or not a photon hit, and does not give any information about where it hit.  The bucket detector cannot by itself produce any image of the object.

The CCD camera is an ordinary camera which detects the position of the idler photon. The information from the CCD and the bucket detector passes through a coincidence circuit, which only records the data from the CCD camera if photons hit both detectors at the same time.

The data that survives the coincidence circuit is collected on computer and, after a sufficient number of photons have been accumulated, an image of the object is built up.  An image has been recorded by the CCD, even though the CCD does not see the object!

The key to this original experiment is that the photons produced by the BBO crystal are quantum-mechanically entangled.  “Entanglement” refers to the fact that the particles are inextricably connected to one another, even though they may be separated by a large distance.  Entanglement is produced in the BBO crystal by a single photon breaking into two photons.  Because energy and momentum must be conserved in this decay, there is a definite relationship between the behavior of the signal and idler photons.  If one photon is deflected “up”, the other must be deflected “down”; if one photon is deflected “left” the other must be deflected “right”.

Quantum entanglement is most well-known in association with the famous Einstein-Podolsky-Rosen paradox, and the ability of quantum particles to “communicate” their states to each other instantaneous over long distances.  According to the postulates of quantum mechanics, the behavior of the entangled particles — their momentum, for instance — is undetermined until it is measured.  Once one particle’s momentum is measured, the other must instantly take on a state which satisfies the conservation of momentum, an odd property referred to (appropriately for the season) as “spooky action at a distance.”

It is to be noted, however, that nothing in the ghost imaging experiment as described relies on this idea of “spooky action”: all that is required is that the produced photons have a strong correlation in their behavior.  It is natural to ask, then, if entanglement is required to produce a ghost image.

In 2002, this question was answered in the negative in a paper titled, “‘Two-photon’ coincidence imaging with a classical source.” 2 The experimental system is very similar to the original imaging experiment, the only difference being the change from photons which are entangled to photons which are simply correlated:

A laser producing very narrow pulses is reflected off of a mirror which has random, rapid tilts.  Because of the mirror, each pulse travels through the optical system in a slightly different direction.   Because the photons in the laser pulse were originally traveling more or less in the same direction, the photons traveling through the system are correlated in direction.  Part of this pulse is sent through the object to the bucket detector, part of the pulse passes to the CCD camera.  Even though there is no perfect correlation between the photons traveling to the two detectors, there is enough of a correlation to result in an image from the CCD again.

How does this work?  One way to think of it is to imagine an experiment in which a person, blindfolded, attempts to reproduce a painting with the help of a friend:

The painter selects a color and a section of canvas to paint on.  In this sense he acts as an optical source, throwing random stuff against the “detector” (the blank canvas).  The friend, however, can see the painting, and he tells the painter whether or not his planned brush stroke is an appropriate match to the object.  The friend plays the role of the coincidence circuit, only allowing to be saved those strokes that are consistent with the object.  In this highly inefficient way, an image which matches the object is eventually built up on the canvas.

The idea is, in a sense, similar to the technique by which a genetic algorithm can reproduce the Mona Lisa.

So ghost imaging can be done without using entangled photons.  Another question then arises: is there any advantage to using quantum photons at all?  My impression is that the difference is in the quality of the imaging: one can produce correlated photons by purely classical means, but that correlation is not perfect.  Only with entangled photons can one produce a perfect correspondence between the photons on the bucket detector and the CCD, and a corresponding image with “perfect” visibility.  It seems, however, that the question of the influence of quantum correlations on ghost imaging is still unresolved and the subject of much debate.

The ghost imaging systems described so far seem rather complicated, possibly even unnecessarily so.  This has very recently been shown to be the case, in a paper titled, “Ghost imaging with a single detector.”3 In this fascinating bit of research, it was shown that one can eliminate the CCD camera altogether, if one has more control over the behavior of the light source.  Now the system has been broken down to the simple form:

Instead of a CCD camera, we now have a spatial light modulator, a device which allows us to control (modulate) the phase of the laser field reflected from it.  The SLM can be manipulated to produce any sort of illumination upon the object which is desired, and this illumination can be predicted and calculated.  By correlating the amount of light which is actually measured by the bucket detector with the light expected to be illuminating the object due to the behavior of the SLM, and repeating this process for multiple SLM configurations, we can again generate an image of the object, even though we don’t have a CCD camera!

A very crude way to understand this effect is to imagine a person with a laser pointer standing on the opposite side of the object from the bucket detector.  The person moves the laser pointer side to side, and up and down, and keeps track of those positions for which the bucket detector registers a signal.  By making a map of those positions for which the detector gets a signal, one makes a map of the object itself:

The motion of the laser pointer is analogous to the SLM in this case.

So what is the use of all this “ghost imaging” shenanigans?  I’m not entirely sure at this point.  It seems to have begun as an interesting demonstration of quantum “spookiness”, though it turns out that quantum entanglement is not an essential component.  The controversy itself, however, and the experiments which arose from this controversy, have increased the understanding of the relationship between quantum and classical correlations.

There is plenty of research being done on such effects, and I’m sure more ideas as how it can be used in applications will be forthcoming.

2 Responses to Boo! The optics behind “ghost” imaging