Posted on February 23, 2010 by skullsinthestars

One of the truly fascinating things about writers of weird fiction is how many of them are remarkably accomplished in other aspects of their lives.  We have folks such as A. Merritt, who had a very successful career as a journalist and newspaper editor, R.W. Wood, who was a very distinguished scientist, Lord Dunsany, who was, well, a Lord, and M.R. James, who was a very distinguished medieval scholar.  And, of course, there’s my pièce de résistance, Winston Churchill.

I can now add to my personal list John Buchan, 1st Baron Tweedsmuir (1875-1940).  Buchan was a politician and novelist, and his resumé includes an impressive collection of honorary academic degrees and military honors.  He was also the 15th Governor General of Canada, representing the monarchy in local Canadian affairs.

In writing, he was incredibly prolific, producing countless novels and works of non-fiction, many based on his time spent working for the colonial administrator of South Africa.  Of his fiction, the work  most likely to be known by most people is his novel The 39 Steps (1915), which was very, very loosely adapted into a great film of the same name by Alfred Hitchcock in 1935*.

Buchan also dabbled in horror stories, and many if not most of these have been collected in Supernatural Buchan, a collection by Leonaur Ltd, who have produced quite a few impressive limited editions of weird fiction: 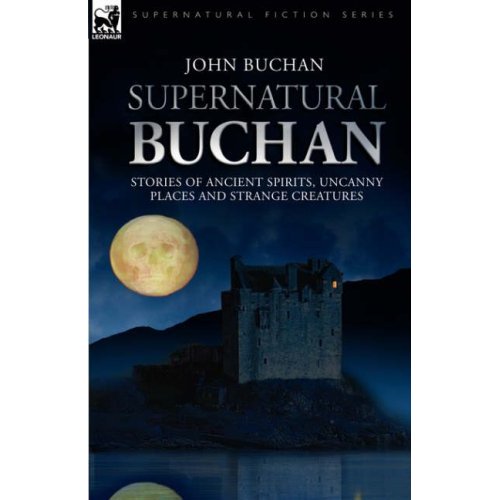 Buchan’s stories are primarily about places — the haunted homes and wilds of the United Kingdom and the dangerous wilderness of Southern Africa.  The landscape plays a prominent role in nearly every story, and is often the central character by itself.  Ancient history also plays a regular role in Buchan’s stories, and a number of the horrors encountered have their roots in ancient Celtic and Roman civilization.

A short summary of the tales:

The Wind in the Portico. A narrator describes his visit to a curious house, restored with the remains of a temple to a pagan/Roman god.  The owner of the house is oddly unsettled by talk of reconsecrating the shrine to Christianity, and his delving into ancient rituals leads to horrific consequences.

No-Man’s-Land. A man decides to take a fishing vacation into the remote Scottish wilderness.  Rumors of missing cattle, murders and abductions in the area have little effect until he comes face-to-face with the beings that lurk in the hills.

The Watcher by the Threshold. The master of a reputable household falls seriously ill, to the brink of death.  When he recovers, he senses that he has been followed back from the brink by something that haunts his every step.

Fullcircle. A trendy socialite couple inhabit a house with a long and checkered history.  The house may be haunted, but it works its haunting upon the residents in an exceedingly subtle manner.

Basilissa. Vernon has been haunted every spring, on the same day, by nightmarish dreams.  When he reaches adulthood, he realizes that his dreams are counting down to some sort of horrific event in his future.  He resolves to take every step possible to prepare for the trial.  (This story is perhaps my favorite in the book, and it is quite different from the others.)

The Green Wildebeest. This one is a tale set in the frontiers of South Africa.  A hotheaded young man desecrates a sacred grove of an African tribe, and finds himself subject to a sinister and bizarre curse as a result.

Journey of Little Profit. Duncan Stewart is essentially a good and even-spirited shepherd, though he was not always that way.  The story of his conversion involves a trip to market with his flock, a dark and stormy night, and an unexpected stop along the way.

The Outgoing of the Tide. A dark tale of jealousy, damnation — and witchcraft.

The Grove of Ashtaroth. Another tale set in the wilds of Africa.  A wealthy man finds a perfect remote valley to build his dream home, complete with a grove of trees and an ancient temple of unknown origin.  His good friend becomes concerned, however, when the idyllic site seems to be destroying him.  (This story is, curiously, almost a “green” ghost story.)

Tendebaunt Manus. A story of two brothers, one who went to war and was killed, and one who seemed to be an utter failure at life — until his brother was killed.

Buchan’s tales are difficult to summarize adequately, though I consider that a good thing.  The tales are high on atmosphere and dread, and those interested in “gotcha!” moments where something jumps out and yells, “Boo!”  would probably be advised to look elsewhere.

Overall, the tales are quite enjoyable.  I’m now motivated to dig out my old copy of “The 39 Steps” — the movie and the book — and give them another look!

* Hitchcock’s film, though barely based on the novel, introduced a large number of action movie tropes that are still used today, and did them well.  The entire film can be watched on YouTube starting here.