A trip to Savannah, Georgia

Last weekend, the wife and I celebrated our first-year wedding anniversary by taking a 3-day trip to Savannah, Georgia.  Savannah is one of those rare American cities that has maintained a significant portion of its historic neighborhood, and this neighborhood is highlighted by a large number of green open squares that were first planned when the city was founded in 1733.

Savannah is a rather hard city to photograph for a novice like myself: buildings are quite close together and there are a large number of very old trees, making it difficult to get nice scenic shots.  These same properties make it a very lovely area to walk and explore, however, and I thought I’d share some of the pictures I did manage to take, including shots of the wonderfully atmospheric Bonaventure Cemetery.

The survival of Savannah’s historic district can be broadly linked to two fateful events in the city’s history.  One of these is “Sherman’s March to the Sea” during the Civil War: to cripple Southern infrastructure, General Sherman marched his forces from Atlanta to Savannah, and enacted a “scorched earth” policy along the way, burning cities and crops and uprooting railways.  Savannah was the final stop, and the Confederate forces fled the city instead of weathering a siege.  Sherman was able to capture it intact, and presented it to President Lincoln as a “Christmas gift“.

The second fateful event happened in 1954, when the historic City Market building (from the 1880s) was plowed under to make way for a parking garage.  This outraged the locals, and seven pioneering women formed the Historic Savannah Foundation to purchase historic buildings and protect the historic district.  Sadly, it seems that a lot of damage had already been done, and the historic district is still a mixture of beautiful old buildings and unsightly modern clutter.  Nevertheless, it is wonderful to visit, perhaps especially so for those who have read/seen Midnight in the Garden of Good and Evil.

The focal points of Savannah — also referred to as the “jewels” of Savannah — are its twenty-two tree-lined squares.  Four squares were included in the original city plan as envisioned by its founder, General James Oglethorpe, in 1733, and other squares were added along the city grid as it grew. One of the original squares is Johnson Square, from which one can get a nice view of the golden-domed city hall:

Johnson Square lies along Bull Street, and squares on Bull Street were originally intended to be grand monument spaces.  An example of such a monument square is Madison Square:

The statue in this square is of William Jasper, a Revolutionary War hero.  Wikipedia notes:

Jasper distinguished himself in the defense of Fort Moultrie on June 28, 1776. When a shell from a British warship shot away the flagstaff, he recovered the South Carolina flag, raised it on a temporary staff, and held it under fire until a new staff was installed . Governor Rutledge gave a golden sword to Jasper in recognition of his bravery.

Jasper died in the Battle of Savannah, in which the Continental Army attempted to retake the city from the British.

Savannah is particularly lovely at night, and the streets seem very safe, as there are always many people about.  Below is an image of Monterey Square: 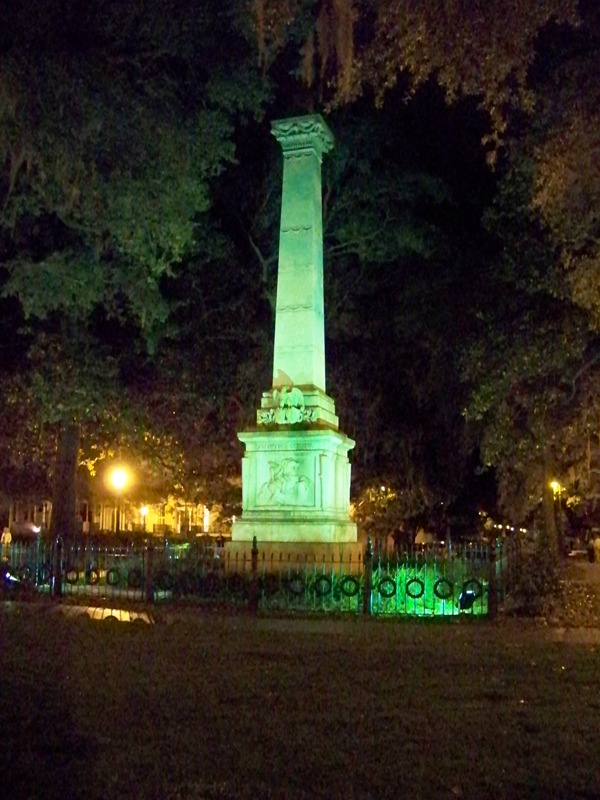 (My night pics are a little blurry, as I forgot my mini-tripod at home for the trip.)

The monument here is of General Casimir Pulaski, a Polish soldier who saved George Washington’s life and fought for the Continental Army in the Revolutionary War; like William Jasper, he died in the Battle of Savannah.

War monuments are all the rage in Savannah; in Franklin Square, there is an intriguing memorial to Haitian volunteers who fought with Pulaski in the Battle of Savannah:

The development of squares as the city expanded ended in 1851, but that didn’t stop additional green areas from being included.  The lovely Forsyth Park was founded in the 1840s for the southern end of the city.  Its landmark fountain looks especially nice at night:

Savannah is also known for its historic buildings, such as the Davenport House, which dates back to 1820: 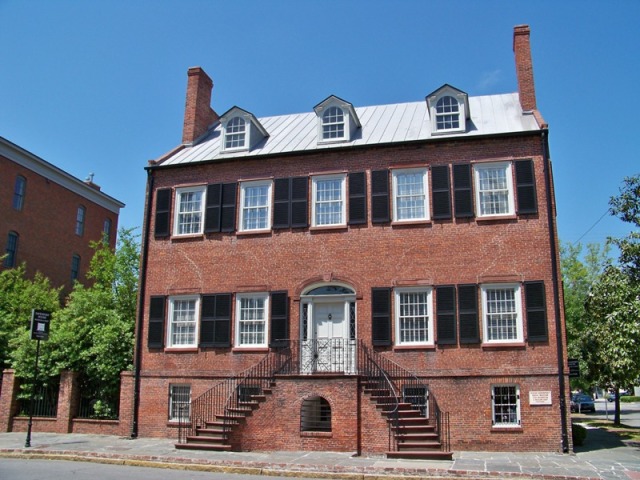 A rather subtly unusual house is the Kehoe House, which now serves as an inn: 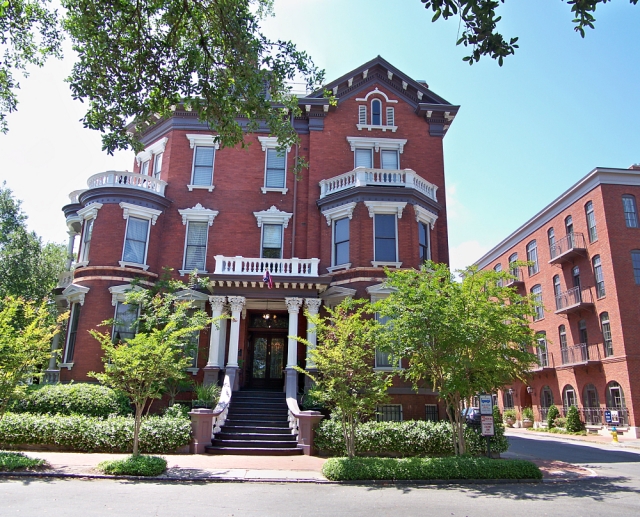 What is unusual about the house and not obvious from a casual glance is that the white pillars and railings are all constructed of iron, not wood! William Kehoe was an iron founder and used his own home to show off the versatility of his building material.

One of the most famous homes in this district is the Owens-Thomas House, constructed between 1816-1819:

Here is the front view of the house, somewhat obscured by trees:

The Owens-Thomas House is considered one of the best examples of English Regency architecture in the United States.

We learned a lot about Savannah’s architecture by taking an architectural walking tour from Jonathan Stalcup, a graduate of the Savannah College of Art and Design who started his own company Architectural Tours of Savannah.  I can highly recommend his general tour, which traces the architectural history of the city; he also can give specialty tours for those who are interested in a particular aspect or style.

Savannah is considered a very “haunted” town, and many of its historic buildings are reputed to have spirit occupants.  Some of these occupants have been “evicted” by exorcism; the broken glass lining the brick wall of this home was apparently done after the exorcism to keep the bad spirits from returning:

Savannah also has landmark churches, among them the quite lovely Cathedral of St. John the Baptist:

Also of note is the Independent Presbyterian Church of Savannah, whose tower is shown here: 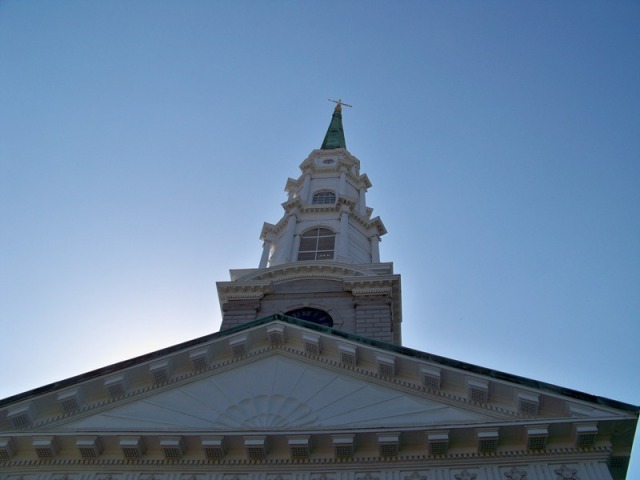 Shopping in Savannah isn’t exquisite; there isn’t a really nice shopping area in the Historical District.  For those interested in touristy things, however, there is a string of shops along the river that makes for a nice walk at the very least:

I can’t finish a discussion of Savannah without mentioning the trees!  The city is filled with lovely oak trees draped with Spanish moss; this photograph is from outside the Juliette Gordon Low birthplace: 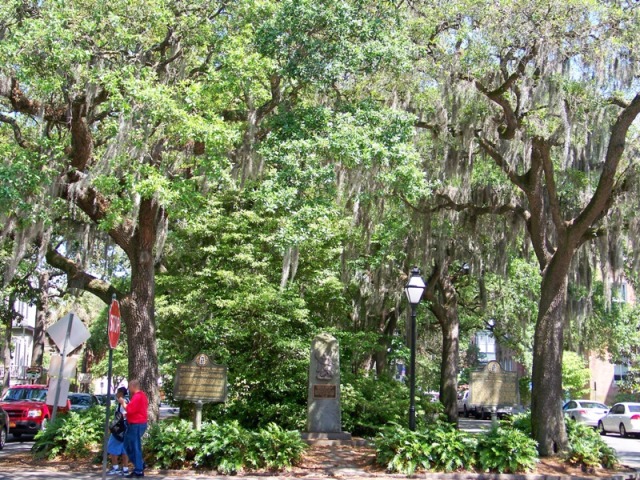 Juliet Gordon Lowe founded the Girl Scouts of America in 1912.  It is curious to note that the oak trees are not the “natural” inhabitants of the city, but were planted; evergreens were the native flora.

On our way out of Savannah, we decided to make a stop at the Bonaventure Cemetery, which is very short drive outside the Historic District.  It lies on the site of a former plantation which was converted to a cemetery in the 1860s.  Though there are many historically interesting people buried in Bonaventure, I found it most interesting for its very atmospheric monuments, made somewhat eerie by the light filtering through the trees and Spanish moss: 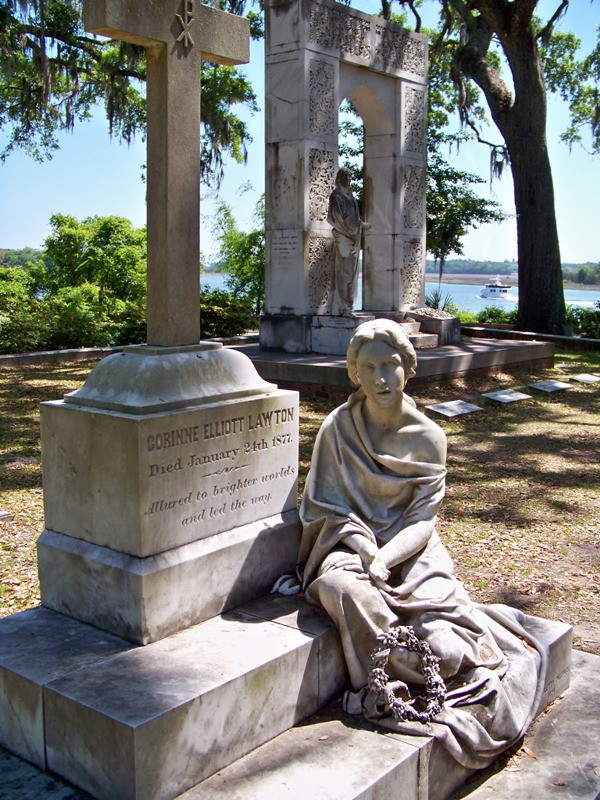 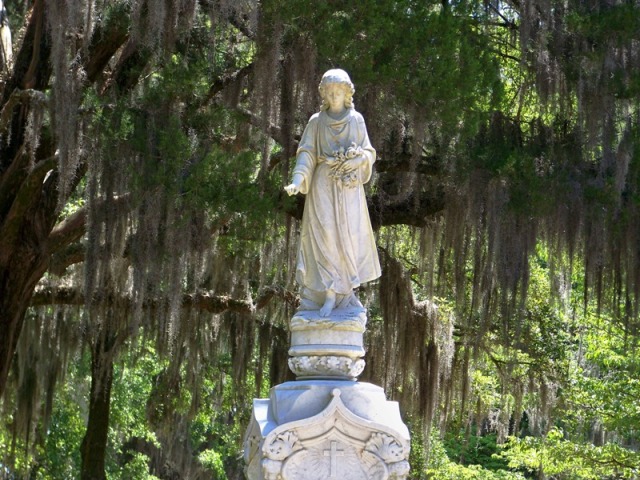 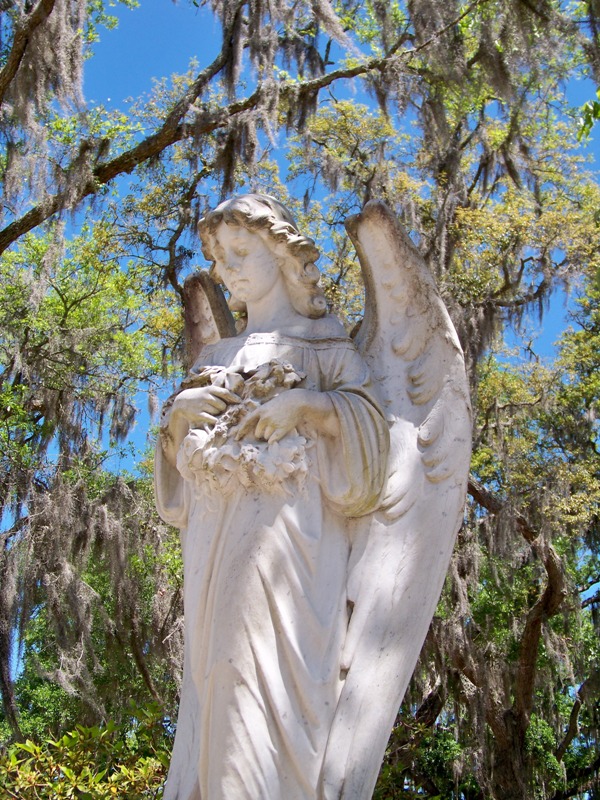 Two little monuments stood out for us on our visit; the first one just for its genuine creepiness: 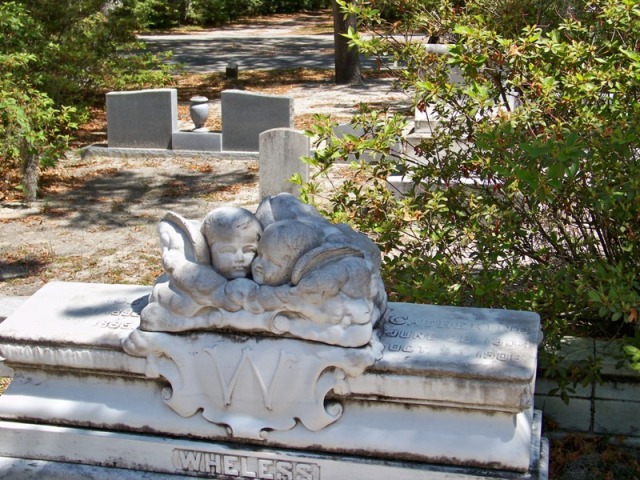 I couldn’t help but imagine being haunted by freaky baby heads after seeing this sculpture!

The second interesting sculpture is of little Gracie: 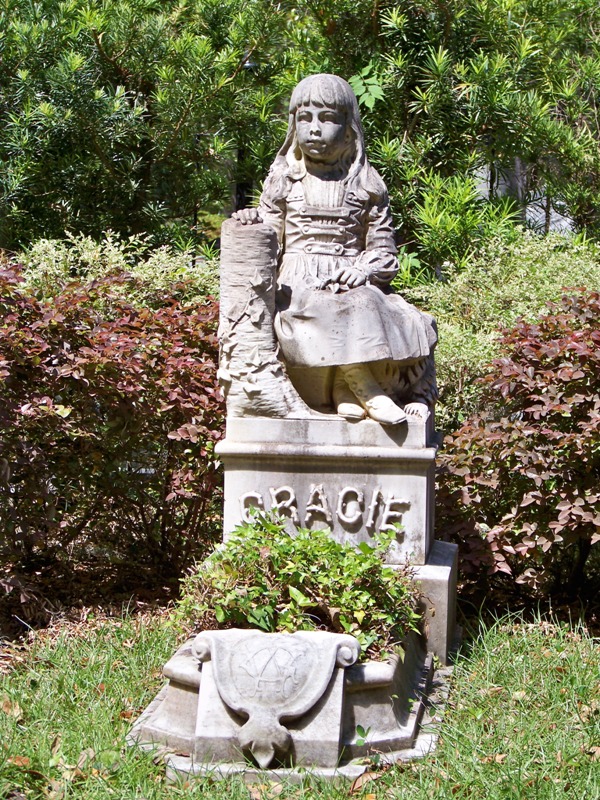 To quote from the accompanying plaque:

Little Gracie Watson was born in 1883.  She was the only child of her parents.  Her father was manager of the Pulaski House, one of Savannah’s leading hotels, where the beautiful and charming girl was a favorite with the guests.  Two days before Easter in April 1889, Gracie died of pneumonia at the age of six.   In 1890, when the rising sculptor, John Walt, moved to Savannah, he carved from a photograph this life-sized, delicately detailed marble statue, which for almost a century has captured the interest of all passerby.

Bonaventure Cemetery is a place I could have wandered all day long, had we not wanted to get home to see our kitties!

Overall, Savannah is a charming city to visit.  I shouldn’t end this post without mentioning the absolutely fabulous food we ate at restaurants B. Matthews, Elizabeth’s on 37th, and The Local 11 Ten.  Savannah is known for its awesome food as much as it is for its history!

This entry was posted in Cemetery, Travel. Bookmark the permalink.

3 Responses to A trip to Savannah, Georgia