A bit over a year ago, I wrote a blog post about the mathematics of infinite series, and how weird such series can be, considering in particular the behavior of “conditionally convergent series”.  A recent post at Built on Facts covered similar oddities and gave a nice and different perspective on them.  In the comments of that post, though, an even more bizarre result from the theory of infinite series was introduced, namely the argument that

This result, if true, is enough to shake one’s faith in mathematics, and is completely non-intuitive for no less than three very big reasons:

So is the equation above correct?  Not exactly; it is based on a valid bit of mathematics centered on the Riemann zeta function, but that mathematics is being somewhat misinterpreted to get the paradoxical equation.  An explanation of what went wrong is interesting in itself, however, and allows me to describe a rather difficult concept in the theory of complex analysis known as analytic continuation.

Before we address the weird infinite series shown above, we first consider the behavior of more familiar series, the geometric series, defined as

(See my previous blog post for an explanation of the notation.)

, each term is larger than the previous one, and the sum just becomes larger and larger as more terms are added.  For

, the magnitude of each term is larger than the previous one, so the sum “swings” between increasingly larger positive and negative values as more terms are added.  For

It is not necessarily clear, however, that the series has a sum for

; we can prove that this is the case, however, and find an explicit, simple expression for this sum as follows.  We introduce a sequence of partial sums

This expression represents the sum over the first

elements of the infinite series.  In the limit

, we recover the infinite series itself.

To determine an explicit expression for the sum of the infinite series, we note that the sequence of partial sums satisfies two identities:

If we take the difference of these two equations, we end up with the relationship:

which may be solved for

, we can see that the term

and the sum of the infinite series reduces to the form:

, the sum of the infinite series therefore has the simple mathematical form

.  This latter function, however, is well-defined for all values of

From a philosophical point of view, we may consider the infinite series

to be a representation of the “true” function

; the representation is only valid when

This is a simple example of what is referred to as analytic continuation.  When dealing with a class of sufficiently well-behaved functions (known as analytic functions), one often finds a representation of the function that is valid over only a limited domain.  It is possible, however, to mathematically find the value of the “true” function everywhere through the process of continuation.  The geometric series is a simple example of this process: we began with the series

which is valid only for

, but were able to show that this is a representation of the function

which is valid for all

This argument applies to the geometric series with complex argument, as well; that is, if we replace

is well defined for any

For our purposes, we state this result in a slightly different way: the function

is valid for all

, but it only represents the infinite series 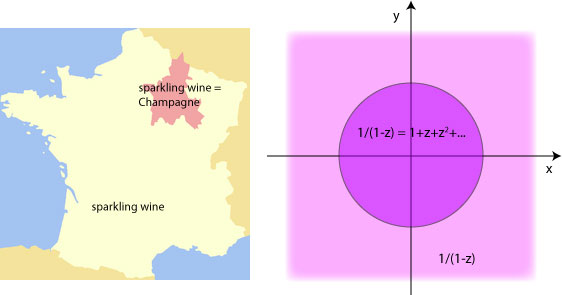 If this seems confusing to you, you’re not alone: concepts related to analytic continuation are some of the most difficult to grasp in studying analytic functions.

How does this relate back to the summation

?  Let us now introduce a series known as the Dirichlet series, defined as 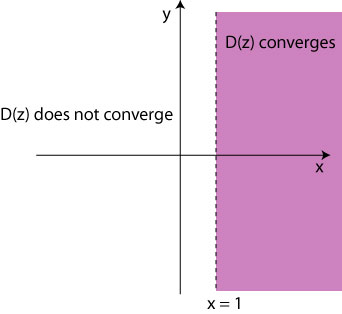 This means that the series does not converge for the choice

, which represents the series:

However, the Dirichlet series can be analytically continued to a function that is well-behaved for all values of

; this function is known as the zeta function,

, the zeta function can be shown to take the value :

This is the explanation of the bizarre result introduced at the beginning of this post.  The Dirichlet series itself does not converge to any sensible value at

, but its analytic continuation, the zeta function, is defined at that point.  From a strictly mathematical point of view, the equation

is incorrect, and involves confusing the Dirichlet series with the zeta function.

The zeta function is an interesting beast in itself.  It is intimately related to the prime numbers, and it can be shown that it may be written in the form

indicates an infinite product, and

ranges over all the prime numbers.  Entire books have been written on the mathematical properties of the zeta function.

One of the great unsolved problems of mathematics is related to the distribution of the zeros of the zeta function; it is known as the Riemann hypothesis, and its resolution would have a huge impact on number theory and our understanding of prime numbers.

So we have seen that in mathematics, the series

does in fact diverge, and one would expect that such a series would not have any sensible physical meaning.  But here’s where things get weird: in the study of the quantum theory of electromagnetism, one encounters series such as

.  Superficially, one would expect that the derivation must be incorrect, but results quantitatively consistent with experiment can be derived if one replaces

An example of this involves the Casimir effect, first introduced in 1948.  In short, it is known that empty space, i.e. vacuum, is never truly empty, but includes “virtual photons” that wink in and out of existence.  These virtual photons can be influenced by metal boundaries, just like real photons, and when two metal plates are placed close together, the virtual photons are “squeezed” out of the region between them.  The imbalance in virtual photons outside and inside the plates produces a net inward pressure, which can be detected by experiment (source):

The calculation of the Casimir force is outside the scope of this post, but it requires an infinite summation over all the allowed energy states between the plates, of the form

This sum is simply the Dirichlet series

; if we naively interpret this sum as a zeta function, we get the result

If this result is used in the Casimir calculation, the result is quantitatively correct!

It’s hard to know what exactly to make of this.  It is to be noted that, mathematically, it is unambiguously true that the series

diverges; however, it seems that in quantum field theory the analytic continuation of this series gives the proper result.*  There seems to be something very deep in that statement, but I’ll be darned if I know exactly what it means.

In any case, this post shows again that infinite series can be very weird!

* It is also worth noting that Casimir used a different approach to determine the sum in his original paper, and didn’t use the zeta function explicitly.

This entry was posted in ... the Hell?, Mathematics. Bookmark the permalink.