You could learn a lot from a ducky: the van Cittert-Zernike theorem

(Alternate titles considered for this post: Ducktoral degree, Send in the ducks, Proof by in-duck-tion, Duck Tales, Duck-ing the issue.)

One of my specializations in optics is the theory of optical coherence, which is the theory that characterizes the random fluctuations of light, and the consequences of said fluctuations.  It is typically one of the most difficult optics topics to teach beginning optics students, probably because it combines two challenging bodies of mathematics: wave theory and probability theory.  Any teaching tool that can be used to help students visualize and understand the basics is welcome, though such tools are few and far between in coherence.

Enter the ducks!  Early this year, some colleagues of mine published a short note pointing out that one can visualize a fundamental result from optical coherence theory, the van Cittert-Zernike theorem, by watching the waves a group of ducks generate when they splash into a pond!

The letter is by W.H. Knox, M. Alonso and E. Wolf, “Spatial coherence from ducks,” Physics Today, March 2010, p. 11; it can be freely read here.  Though the letter describes the connection between coherence and ducks, it doesn’t explain what the van Cittert-Zernike theorem is, so I thought I’d fill in a bit of detail with this post!

It is first worth reviewing a few concepts from optical coherence theory that I covered in a “basics” post some time ago.  Coherence may be loosely defined as the ability of a light wave to produce interference patterns, and these interference patterns are typically produced by bringing together light from two different parts of an extended wave.  The only way an interference pattern manifests is if the light from the two sources have a statistical similarity to one another: that is,the vibrations of the two light waves have some definite relationship to one another: 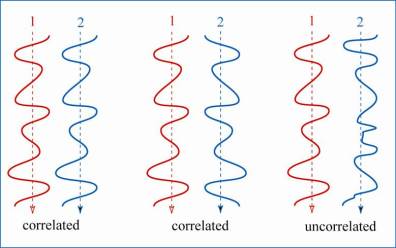 We will be more concerned with spatial coherence in this post, which is the ability of light at one point in a wave to interfere with light from a spatially distinct point of the wave.  This interference-causing capability can be measured using the classic Young’s double-slit experiment: 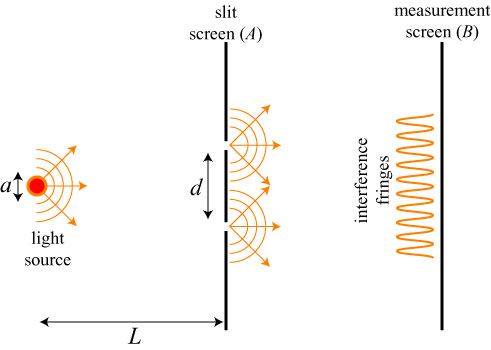 is incident upon an opaque screen a distance

away.  The screen is perforated by two holes separated by a distance

.  It can be demonstrated experimentally that significant interference fringes appear on the screen only if the pinholes lie within a transverse area

of the functional form,

is the average wavelength of the light.  This area

The simple formula for coherence area has a number of intriguing consequences.  The most significant for our purposes is the observation that the coherence area increases with increasing

; that is, a light wave from a thermal source becomes increasingly spatially coherent as it propagates.  This is especially relevant for astronomy, as we will discuss momentarily.

The rigorous theoretical calculation of the increase of spatial coherence on propagation was developed independently by Dutch physicists P.H. van Cittert in 1934 and F. Zernike in 1939, and is therefore known as the van Cittert-Zernike theorem.

At first glance, the result of the theorem is quite surprising. In general, a thermal source (like a star or lightbulb) consists of a large number of atoms that are radiating independently of one another.  The light coming from different atoms cannot interfere, and at short distances from the source it is impossible to create an interference pattern with Young’s interferometer.  As the light propagates, however, it somehow manages to develop the ability to cause interference with itself — how is this possible?

To understand the van Cittert-Zernike theorem, we consider a relatively simple (and silly) system consisting of only two independent atoms.  One atom radiates apples, while the other radiates oranges — obviously, the light from the two atoms is completely incomparable.

So what happens when the orange light and the apple light leaves the source?  Light waves spread as they travel, and the intensity of light correspondingly decreases as it travels.   We now compare the total light field at two different points in space (labeled 1 and 2), not too far from the source: 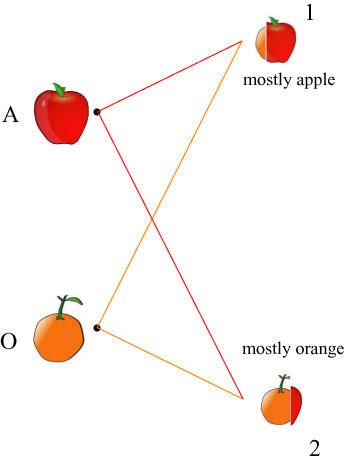 Let us now consider two points much farther away from the atoms: 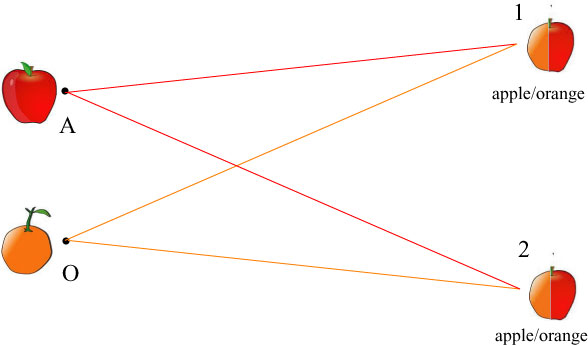 The crux of the van Cittert-Zernike theorem is, in essence, a geometrical effect: the farther away one travels from the source, the less significant the distance between the individual atoms (or apples and oranges) becomes.  The above argument is oversimplified, because only the amplitudes of the wavefields are considered; the phases of the waves are also important, though the result is essentially the same.

So what does this have to do with ducks?  If we consider a group of ducks hopping into a pond, each duck produces his/her own water wave.  The ducks may be thought of as the individual “atoms” of the van Cittert-Zernike theorem; because they enter the water independently of one another, they produce waves that are independent of one another.  Let’s go to video:

As the ducks enter the pond, they produce a crazy, random collection of waves.  However, if one observes the waves as they travel far away, they become very regular and well-behaved circular waves: they have become spatially coherent!  The ducks have very helpfully demonstrated the van Cittert-Zernike theorem for us.

The observation that the waves become circular as they propagate away from the ducks gives us another way to think about the van Cittert-Zernike theorem.  A circular wave on a pond, or a spherical wave in three-dimensional space, is a fully (spatially) coherent wave, and such waves are produced by point-like excitations.  An irregularly-shaped partially coherent wave can only be produced by an extended source: 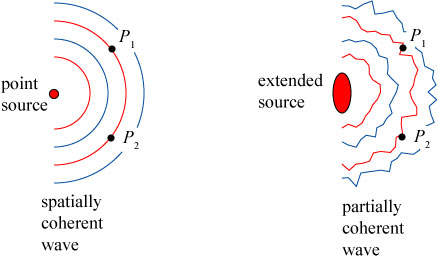 As a wave becomes more coherent via the van Cittert-Zernike theorem, it becomes indistinguishable from a wave produced by a point source.  From an imaging point of view, we can say that a luminous object appears more point-like the farther away we get from it!

In fact, the only way we can distinguish between a point-like object and an extended object is to collect light from an area significantly larger than the coherence area.  This is, in essence, one reason why we need telescopes with very large apertures in order to image distant objects.  The coherence area of sunlight, for instance, is

a very small number!  Our small pupils are therefore sufficient to resolve an image of the sun (though, for obvious reasons, you shouldn’t look at it directly!)  The coherence area for nearby stars, in comparison, is

a very large number!  One would need a telescope of significant aperture size to resolve any features of such a star.  There is a lot one could say about the relationship between spatial coherence and imaging, but we’ll leave such discussions for another time.

The charming letter by Knox, Alonso and Wolf demonstrates that even rather challenging concepts in optical physics can often be visualized by making analogies with rather familiar circumstances in our daily life.  Who knew that ducks were such good physics instructors?

This entry was posted in Animals, Optics. Bookmark the permalink.

28 Responses to You could learn a lot from a ducky: the van Cittert-Zernike theorem