Posted on October 15, 2010 by skullsinthestars

I can always tell when Halloween is near —  wandering through the bookstore, I inevitably find multiple new books of horror that I absolutely cannot resist.  This time around, I found three must-have hardcovers, putting a significant dent in my wallet.  The first of these is the compilation of short stories, Haunted Legends (2010), edited by Ellen Datlow and Nick Mamatas: 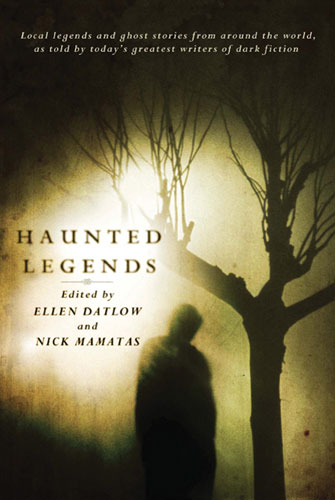 In a world where most horror compilations consist of yet another collection of stories about zombies or sexy vampires, Haunted Legends is a refreshing change.  The premise is based on a simple observation: every region of the world has its own “true” stories of ghosts and monsters, many of which are genuinely creepy; however, these stories are usually so poorly told that they’re depressingly boring.  As Mamatas states in the introduction,

The “paranormal investigator” with his electronic stud finder recalibrated to find ghosts instead of pieces of wood, hell, he can barely think, much less write a compelling story.

So why not get professional horror writers to take their favorite “true” stories and rewrite them?  Haunted Legends includes 20 all-new stories, some of which are by very well-known authors such as Ramsey Campbell and Joe R. Lansdale.

The stories are quite good overall and are all very well written, though I felt that some of them evolved outside of the spirit of the compilation’s theme.  A number of authors used the stories to tackle some rather dark and serious topics — rape, complicity in atrocities, drug abuse.  This is in general fine, but I was much more excited by the prospect of reading expertly told “ghost stories”, and a little disappointed by the deviation.

Still, quite a few of the stories are very, very good, and a couple of them by unfamiliar authors were so good that I’ve sought out their other works.  Some of my favorites:

Each story is accompanied by an afterword by the author that explains the “true” inspiration for the story.  These anecdotes are very illuminating, necessary, and often as compelling as the stories themselves.

Horror compilations are always a little “hit-or-miss” in terms of their content.  Haunted Legends is in the same vein, but nevertheless the volume is overall filled with great and creepy tales, and has a great premise.  I would recommend the book to anyone who is a fan of horror fiction or a good, “true” horror story.  I hope the editors plan to continue this theme in future compilations!