Posted on November 20, 2010 by skullsinthestars

Still working on my NaNoWriMo novel, though I hope to finish well before the end of the month.  In the meantime, I’m trying to catch up on a few long-delayed posts!

Last month, I had the pleasure of reading and reviewing Haunted Legends, a horror compilation edited by Datlow and Mamatas.  There were quite a few outstanding stories in the compilation, but one that really, really impressed me was The Redfield Girls, by Laird Barron.

I don’t claim to be that knowledgeable with respect to today’s horror authors; in fact, one original motivation for writing this blog was to get me reading again after far too many depressing encounters with second-rate books.  Though I hadn’t heard of Barron before, his Redfield Girls intrigued me so much that I immediately went out and purchased his first collection of short stories, The Imago Sequence (2007): 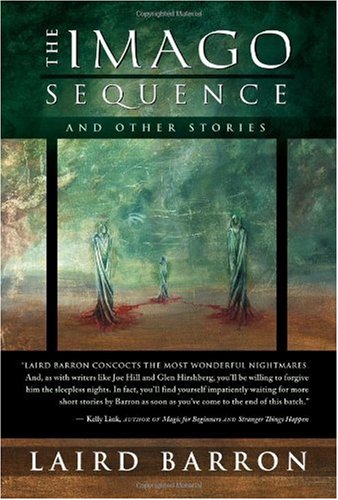 The Imago Sequence collects nine of Barron’s short stories, published (with one previously unpublished exception) between 2001 and 2006.  That may seem like a relatively small number of stories for a collection, but Barron’s tales are lengthier than the typical horror story; some are pushing into novella length.  This is actually quite refreshing, as the longer tales allow Barron time to build up a sense of dread and develop his characters, and in my opinion there aren’t any wasted pages.  The writing itself is quite beautiful, even poetic in certain places.

The stories of The Imago Sequence are primarily supernatural in nature.  It would be unfair to directly compare Barron’s work to any other author, because it is very unique, but the content is reminiscent of the sort of cosmic horrors that authors like Lovecraft envisioned.  Among the stories, ones that stood out for me included:

It is difficult to really explain why Barron’s stories are wonderful.  Like the stories of most of my favorite authors, the joy of them is in the telling of the tale, not as much where they end up.  Two things really stand out in the stories, however: the subtlety of the horror and the colorfulness of the characters.

The latter point is worth mentioning in a bit more detail.  The tales of The Imago Sequence all center on male characters who are all past their prime in some way: a jaded detective, an aging spy, a failed actor, an older man with a young wife he can’t handle.  Issues of masculinity and emasculation are recurring themes in this collection.

One other observation regarding the characters: they don’t act like idiots!  It is nice to see characters who act very sensibly and smart — and still end up suffering horrible fates!

I should also point out that, though the stories excel in providing a sense of growing dread, that doesn’t mean they don’t have their shocking or gruesome moments.  One of my favorite tales starts with the sentence, “–Then he bites off my shooting hand.”

Barron’s The Imago Sequence is a wonderful collection of stories that I can highly recommend.  I’ve already ordered his more recent collection, Occultation, and really looking forward to reading it!