Posted on February 7, 2011 by skullsinthestars

When you read enough horror fiction, certain themes recur consistently in the wonderful chaos of ideas.  Among these, I was recently struck by how often the visual arts appear as the centerpiece of horror stories.  This primarily involves paintings, but also to a lesser extent sculpture and other forms of visual art.* 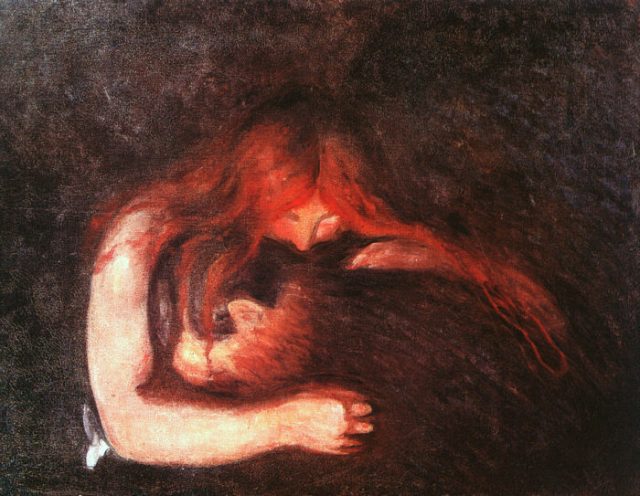 I thought it was about time I did a post about art in horror, and described some of the stories that have stood out to me as good examples of the interplay of the two seemingly different forms of expression.

So what makes the art world such a ripe field for gathering horror stories?  The most obvious explanation is illustrated by the picture of Munch’s The Vampire shown above: paintings can be very creepy!  Works of expressionism, surrealism, or post-impressionism, for instance, can show the world in an unnatural or nightmarish manner. 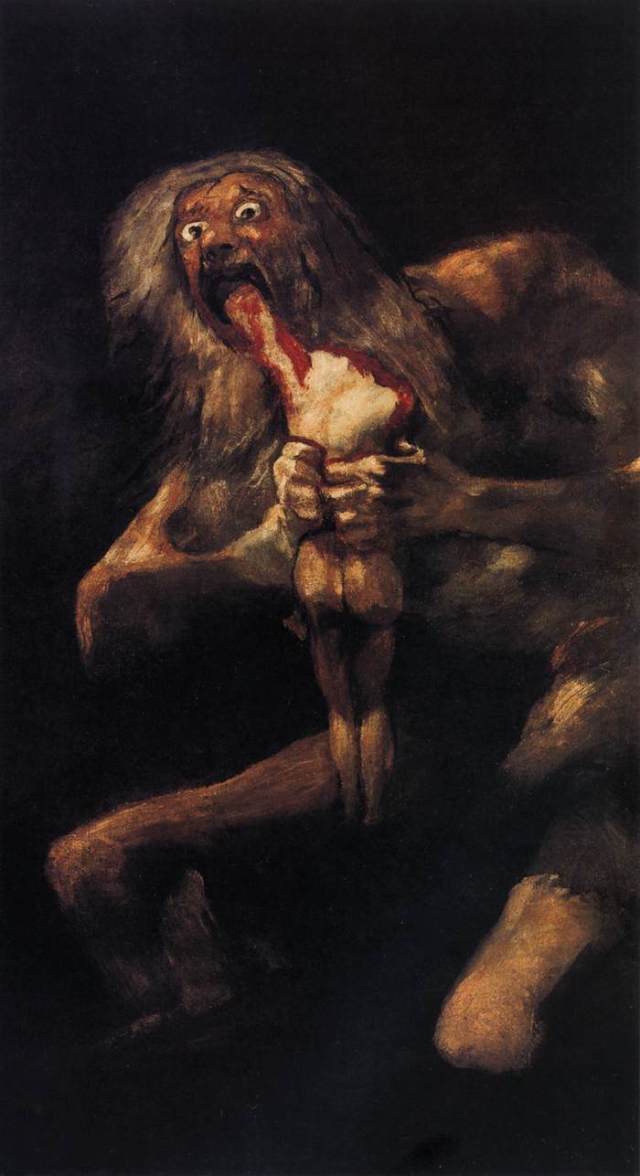 There must be more to it than just the creepiness factor, however.  Music can be creepy, but doesn’t inspire quite as many horror stories (with a number of exceptions).  Another part of the allure is the singular reputation that visual artists have for obsession that borders on, or crosses over into, insanity. 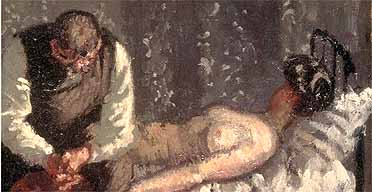 Walter Sickert is a good example of this.  He developed a keen interest in the Jack the Ripper murders of 1888, and apparently renamed his painting shown above inspired in part by those crimes as well as a murder in Camden Town in 1907.  This intense curiosity in the Ripper has led a few investigators, including novelist Patricia Cornwell, to suggest that Sickert himself was the Ripper!

Thinking about artists and how they pour their intense passions into their art, another intriguing idea suggested itself to me.  Paintings are, in a sense, the real “ghosts” of their creators.  In fiction, a ghost is that part of a person that remains vital after death, usually incorporating the person’s most basic emotions: fear, desire, anger.  Painting are as close as we can get to such a living remnant.  It is hard to repress a little chill looking at Wheatfield with Crows, one of Vincent van Gogh’s last paintings, without feeling you are seeing a part of van Gogh’s own despair, encroaching insanity, and eventual suicide.

Van Gogh is perhaps the perfect example of the sort of themes that run through horror stories about art: madness, obsession, and self-destruction.  It is not just the obsession of the artists that come into play, however; the obsession of art collectors and sellers can be the focus of the story — as can the subjects of the art.

The Night Before the Battle, James Henry Beard, 1865 (source).

With all this in mind, let’s look at a summary of a number of these art and horror stories.  When the stories are in the public domain, a link is provided. 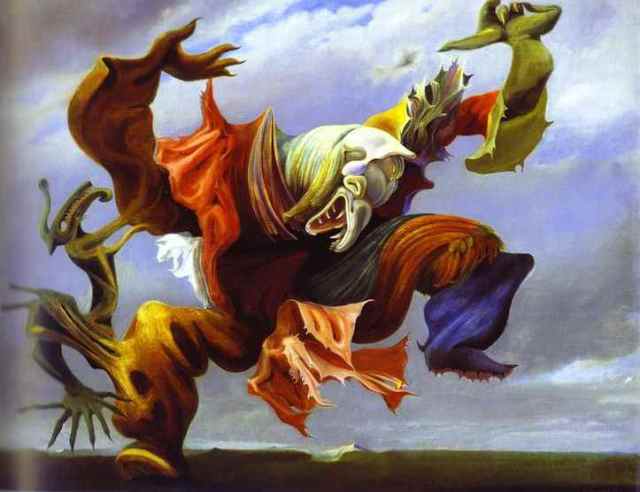 The Picture of Dorian Gray, Oscar Wilde (1890).  The classic novel of wickedness and art.  The beautiful young man Dorian Gray dedicates his life to pure sin and hedonism, and makes a wish that a portrait of him would grow old in his place.  His wish comes true, and the ever-youthful Dorian leaves a trail of misery in his wake, with his painting becoming ever more vile with every dark act.

The Oval Portrait, Edgar Allen Poe (1850).  A short tale by the master of the macabre.  A man sheltering against a storm at an abandoned chateau finds himself captivated by the portrait of a young woman hanging on the wall.  Finding its description in a catalog nearby, he learns the dark history behind the painting.

Pickman’s Model, H.P. Lovecraft (1926).  Probably the classic short story of artistic horror.  Thurber, a patron of the arts and the story’s narrator, shares his experiences visiting the very private studio of weird painter Richard Upton Pickman.  Pickman’s specialty involves speculative works about the ancient and forgotten underground of Boston, and the creatures that exist there; as Thurber’s visit continues, he comes to realize that the Pickman’s oeuvre is a reflection of the man’s own madness.

This story has wonderfully atmospheric descriptions of ancient and decaying Boston, and its sinister underground.

Skin, Roald Dahl (1952).  A short and nasty little tale, from an author famous for being nasty.  An aging former tattoo parlor owner named Drioli reveals that he wears on his back a tattoo painted by a very famous and long gone artist.  How much is Drioli willing to accept for the skin off of his back?

The Mezzotint, M.R. James (1904).  Mr. Williams, a collector of art for the Cambridge museum, is pointed towards a piece of artwork, a mezzotint, of a manor house.  When he takes possession of the image, however, he and his colleagues find that they are now witness, through it, to a horrifying event in the manor’s history.  M.R. James is one of the great writers of ghost stories, and the mezzotint is an excellent example of his work.

Huguenin’s Wife, M.P. Shiel (1895).  The narrator is desperately summoned by his friend Huguenin to his home on a secluded Greek isle.  Huguenin’s wife has died, but she may not have been human to begin with.  Key to the mystery are two self-portraits painted by the wife herself — one monstrous.

Benlian, Oliver Onions (1911). Onions is another of the master authors of ghost stories, usually telling tales that are subtly unsettling.  In Benlian, we have a tale of two obsessions — the obsession of the narrator with Benlian, an eccentric sculptor, and the obsession of Benlian himself, who envisions a work of art in which he literally becomes his masterpiece.

The stories that are mentioned below are not freely available on the internet, but I provide links to the collections they have most recently appeared in. 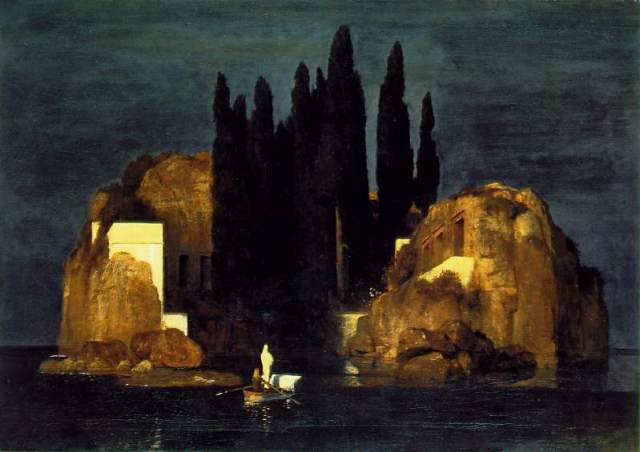 Orange is for Anguish, Blue for Insanity, David Morrell (1988).  In a tale directly inspired by the life and works of van Gogh, thriller author David Morrell tells another tale of obsession.  Motivated by the death of his friend in the pursuit of the “secret” of Dutch artist van Dorn’s artwork, a graduate student travels to southern France in search of answers.  Van Dorn’s secret has driven many to madness and death before, and the student risks his own soul in its discovery.

The Imago Sequence, Laird Barron (2005).  An aging investigator is hired to search for the missing two photographs of a trio called The Imago Sequence.  Parallax Alpha, the known photograph, is an indistinct darkness that may be artwork or may show something primitive and horrific in the depths.  As the investigator tracks down the other members of the collection, he finds those connected with the trio are in danger and his own life and sanity is threatened with corruption and regression.

The Phantom Model, Hume Nisbet (1894).  When painter Algar Gray seeks a new model for his masterwork, a colleague suggests he search amongst the lower class of society.  He finds his ideal in a woman whose lifestyle is leading her on a downward spiral to death.  Death itself, however, cannot interrupt the completion of the painting, or Algar’s obsession.

So, are there other stories involving horror and the visual arts that I’ve missed?  I’m sure there are plenty; let me know in the comments!

* I’ve drawn inspiration in this post, just this once, from Tom Levenson’s blog style, in which he uses artwork to highlight his content. 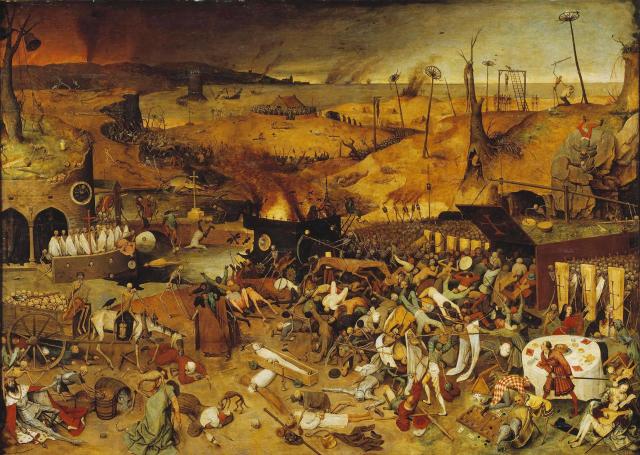 The Triumph of Death, Pieter Bruegel the Elder, 1562 (source).

13 Responses to Madness on canvas: art in horror fiction