Posted on March 20, 2011 by skullsinthestars

In my regular discussions of optics and electromagnetic fields in general, I use a lot of pictures with arrows on them.  For instance, my post on Faraday’s law has the curious figure,

where the red arrows are again the electric field and the blue arrows are the magnetic field (we won’t concern ourselves with the difference between B and H for now).

I’ve tried to explain the meaning of vector fields in individual posts when they have appeared; but it was time to put all these ideas in one place.  In this article we will address the concept of a vector field, and explain what such fields mean for electricity, magnetism, and light waves.

Well, that isn’t a terribly helpful description until I give an example from the real world!  The simplest example of a vector is represented by the velocity of a car moving down the freeway.

Let’s look at the problem this way: suppose you were recently in a car accident at an intersection.  You were driving 20 mph through the intersection when a car runs the light from the right and hits you at 30 mph.  Also, a car was coming towards you from the other side of the intersection, at 40 mph, and ends up not being able to stop in time and runs into both cars.

Now you’ve got to explain to the insurance investigator what happened, and he asks you to draw a picture of what the cars were doing just before the accident.  So you draw the following: 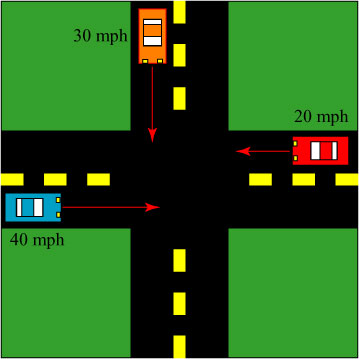 Your car is on the right.  In order to indicate the relative speeds of the cars, and where they’re going, we draw arrows.  It is quite natural to indicate a faster moving car by a longer arrow; in fact you draw the picture so that each arrow is proportional to the speed of the car!  The arrow of the blue car, going 40 mph, is twice the length of the arrow of your car, going 20 mph.

These arrows represent the velocity vectors of the cars; they graphically encapsulate both the magnitude of the car’s motion (how fast it is going) and the direction of the car’s motion.  Lots of important quantities can be characterized with vectors: relative position (“the Best Buy is 2 miles Northeast of here”), acceleration and, as we will see, forces on objects.

There is a lot more to vectors than simply drawing pictures; vectors can be added together, multiplied, and the calculus of vectors is a fundamental part of much of physics.  For instance, if we also know the masses of the cars in our accident picture, we could determine the vector momentum of each of the cars and make predictions of what happens to them after the collision.  For this “basics” post, however, we’re primarily interested in what the graphical representations of vectors can tell us.

Suppose now we are interested in describing the flow of water in a river.  There is no longer a single vector that describes the motion of the river; thanks to twists, turns and obstacles in its course, the velocity of the water can be different at different points.  We could try and describe this by representing the velocity of the water at regularly-spaced points along the river’s length: 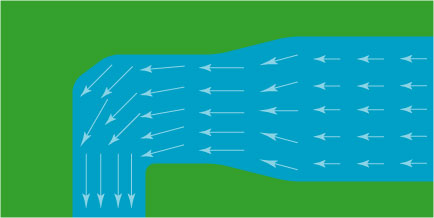 The picture isn’t great, but gives the idea!  The arrows get longer — the water speeds up — as the channel gets narrower and, of course, the direction changes as it goes around the bend.

This collection of arrows constitutes a vector field: it describes the local velocity of the water over the entire course of the river.  We could in principle experimentally determine this vector field by dropping leaves into the water at different points and measuring their speed and direction.  It is to be noted that a vector field may also be time-dependent: if a flood comes rushing down river, the velocity of the water will increase with time as the flood approaches.

In mathematics, a vector field would be a continuous function of position — that is, we would need to draw an infinite number of arrows, one for each point in space, to properly characterize the field behavior.  It would be impractical to show all of these arrows — the picture would get very messy — so we only draw a few regularly spaced arrows to capture the gist of the flow.

We can also make a vector field to describe the forces acting on an object.  Let us suppose we have a small metal sphere that has been positively electrified and fixed in place.  We then take another positively electrified sphere (the “test charge”) and place it at different positions around the fixed one, measuring the strength and direction on it at each location.  When we do so, we can draw a vector field for the force on the roving sphere of the form: 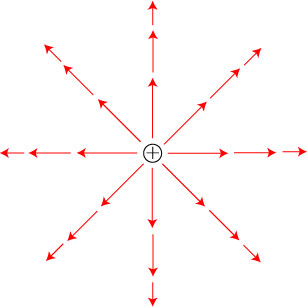 The figure tells us a number of things: the force on the test charge is always pointed directly away from the fixed charge.  Also, the force decreases as one moves further away from the fixed charge.  In fact, it decreases as the inverse square of the distance between the charges, as first determined by Charles-Augustin de Coulomb in 1784-1785, a relation now known as Coulomb’s law.

Coulomb measured this force using a technique strikingly similar to our hypothetical experiment above: he used a torsion balance to measure the strength of forces between electric charges at different distances. 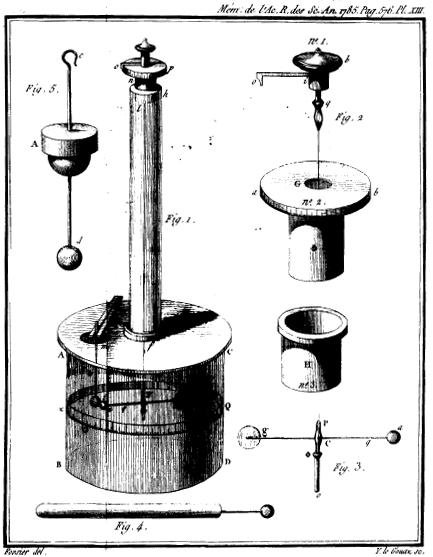 One electric charge was fixed in place, and the other was suspended from a bar on a thin thread.  The force between electric charges applies a torque on the charge on the bar, causing the thread to twist.  Knowing the torsion properties of the thread, Coulomb was able to determine the strength of the electric force as a function of distance between charges.

The force diagram we drew above is useful but can be made even more so by introducing a largely philosophical argument.  Experiments show that the force

on the test charge is directly proportional to the strength

; in terms of vectors we label the vector of proportionality 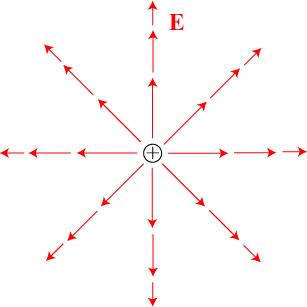 It is worth noting that we often use words like “flow” and “flux” to describe vector fields, which is a somewhat natural terminology in light of the vector field of the river velocity we talked about earlier.  The figure as shown, however, also gives us information about the strength of the field at different points in space; we will refer to it as an “amplitude field” for future discussion.

We note that the arrows of the electric field are all connected, tip-to-tail.  Keeping with the idea of the flow of the field, we can connect the arrows into single “streams” that radiate away from the charge: 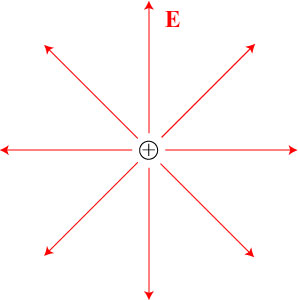 We lose information about the relative strength of the vector field at different points in space, but gain a simpler and more elegant depiction of the field.  We refer to such a picture as a “flow field” for future discussion.

More complicated distributions of charges can now have their electric fields mapped out.  For example, the field of an electric dipole (“dipole”=”two poles”) may be illustrated as 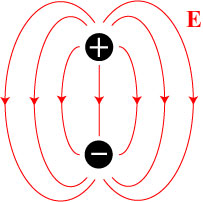 It is to be noted that electric field lines start at positive charges and end at negative ones.  For this reason, the former are referred to as “sources” and the latter as “sinks”.

We may draw similar pictures for magnetic forces and fields, though the interpretation of such pictures is a little trickier to explain.  Historically, electricity and magnetism were considered to be two separate phenomena, as the only sources of magnetism known were natural permanent magnets.  This changed in 1820, when Hans Christian Øersted accidentally discovered that an electric current, i.e. moving electric charges, will deflect a magnetic compass needle.  This was the first evidence that electricity and magnetism were actually related to one another.  After hearing of these discoveries, André-Marie Ampère elaborated upon them and formulated the basic principles of magnetostatics: steady (static) electric currents result in magnetic fields which circulate around them:

can be determined using the so-called ‘right-hand rule’: if you point the thumb of your right hand in the direction of the current, your fingers curve in the direction that the magnetic field circulates around it.  If you look at the magnetic fields of the loop of current, you may note that it looks suspiciously similar to that of the electric dipole.  This is in fact why a current loop is known as a “magnetic dipole”.

It is to be noted that the magnetic fields don’t start or stop anywhere — they form closed loops themselves.  There are evidently no “sources” or “sinks” of magnetic fields, which is often stated by saying that magnetic monopoles do not exist.  However, if a single magnetic monopole could be found anywhere in the universe, it would naturally explain why electric charge comes in discrete quantities; researchers have actively sought out such monopoles for years.  In any case, we can say that magnetic fields are produced by moving electrical charges. 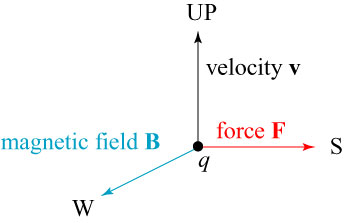 With all this in mind, we can now return to the two figures that we started the post with and interpret them properly!  The first of these was a depiction of Faraday’s law:

This figure takes advantage of a depiction of a vector field as a “flow field”, as described earlier.  Faraday discovered that a changing magnetic field

that circulates around the changing field.  If a wire loop was placed in the plane where the electric field is shown circulating, that wire loop would have a current induced in it by the electric field.  It is to be noted that we have to include an additional arrow to indicate an increase or decrease in the magnetic field: the vector field lines themselves are insufficient to depict a changing field.

Faraday’s observation that a changing magnetic field creates an electric field was a fundamental step in eventually determining that light is an electromagnetic wave.  The second figure that we started this post with shows a depiction of such a wave: 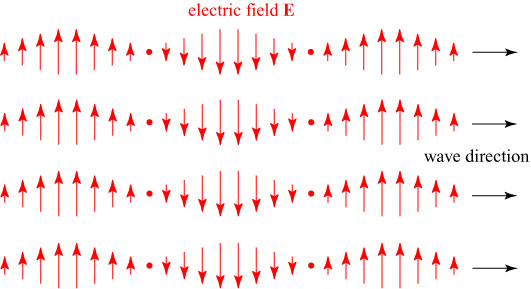 It should be noted that none of these depictions of vector fields are perfect. Each of them omits important field properties and is misleading in its own manner; the only precise depiction of a vector field is the mathematical one.  Nevertheless, illustrations of vector fields can be useful tools to help visualize their often complicated behavior.  Hopefully this post will help the reader properly interpret such pictures!  (And hopefully you’ve learned a little about electric and magnetic fields along the way!)

This entry was posted in Optics basics, Physics. Bookmark the permalink.