Posted on October 26, 2011 by skullsinthestars

It’s that time of week again for Twitter #weirdscifacts!

585. Oct 19: Thanks to Georg Cantor, we know that some infinities are bigger than others!  The concept of “infinity” is a tricky business and very non-intuitive, in large part simply because none of us have any experience with infinity in our lives.  Cantor was the first to point out the unusual observation that the infinite set of real numbers is infinitely larger than the set of positive integers (1,2,3,…).  Cantor’s proof of this has been a lightning rod for mathematical cranks, who are constantly trying to prove him wrong (and failing).

586. Oct 20: Biologist Élie Metchnikoff (1845-1916) drank sour milk every day; he believed lactic acid prolongs life.  This is another case for the file of “intelligent scientists can still believe silly things”.

587. Oct 21: Female monkeys indulge in synchronised sex.  Wha? Why, you ask?  To thwart the alpha males, and allow every male a chance at reproductive success.  (h/t to @prancingpapio)

588. Oct 22: Margaret Thatcher, former Prime Minister of UK, was trained as a chemist.  Science is probably one of the last things that comes to mind when thinking of Thatcher, but she not only trained in chemistry but worked under the eventual Nobel Prize winner Dorothy Hodgkin.

589. Oct 23:  The unconventional anthropology of the Etoro, favoring homosexuality over hetero.  (Warning: somewhat graphic descriptions at the link!)  Tip o’ the hat to @mjrobbins.

590. Oct 24: Science buzz of the day: deep-sea giant (4-inch) “amoeba”! It’s not technically an amoeba, but it is a single-celled organism that is comparable in size to a person’s hand!  We tend to think of single-celled creatures as being necessarily small, but this is clearly not the case.  (The movie “The Blob” may one day turn out to be a documentary!)

591. Oct 25: Meet the tiny bumblebee bat: 2g, and only about an inch long!  Our impressions of the “normal” size of creatures can often be way off, as the giant “amoeba” of the last fact demonstrates.  On the other end of the scale, most of us would probably think of mammals as being no smaller than a mouse.  The bumblebee bat, however, is essentially the size of a human finger-joint! (via @ejwillingham and @scifri) 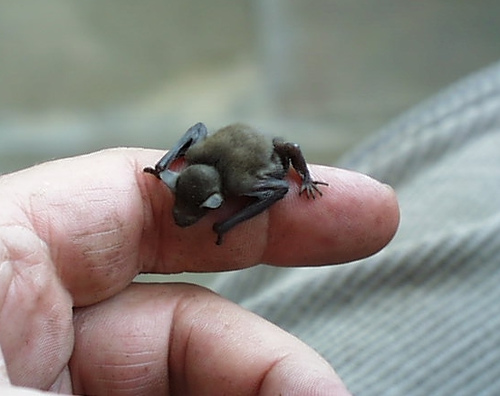