Posted on April 26, 2012 by skullsinthestars

The past few weeks I’ve been preparing a lot of entertaining demonstrations of physics principles for a Science and Technology Expo to be held at UNC Charlotte on April 29th.  I thought I’d start writing short posts highlighting the various gadgets and gizmos I’ve encountered.

At first glance, it seems like a very ordinary, if ornate, drinking cup: 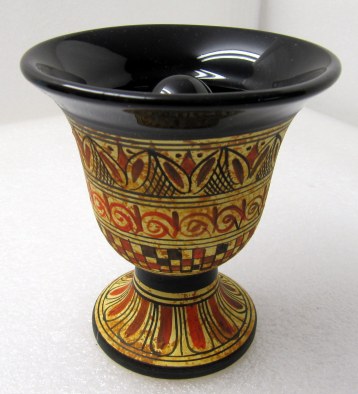 There is an odd bump in the center of the cup, but otherwise, it seems quite normal, and if it is filled to a certain level can be used without incident.

However, if the cup is filled higher than the bump, the drink starts to drain out of the bottom — in fact, the cup will completely empty itself!

This is the trick of the Pythagorus cup, also known as the Pythagorean cup or the Tantalus cup!  It can be used as a nice prank to play on someone (don’t use red wine, unless you need to replace your carpeting anyway), but also serves as a nice demonstration of some physics of fluids.

The cup is known as a “Pythagoras cup” because its invention is credited to the great Greek mathematician and philosopher Pythagoras of Samos (570 B.C.E. — 495 B.C.E.), best known for the Pythagorean theorem, which states that:

For a right triangle, the square of the hypotenuse is equal to the sum of the squares of the two lesser sides, i.e.

Tradition holds that Pythagoras was supervising workers at the water supply works on Samos and invented the “fair cup” (or “greedy cup”) to moderate the workers’ wine intake.  Provided they filled their cups only to a moderate level, they could drink in peace.  It is unknown if there is any truth to this, but it certainly makes for a fun story!  Ornate Pythagoras cups are sold as souvenirs on Samos, and can be purchased (relatively) cheap on eBay.

So how does it work?  Here is a see-through version of the cup, purchased from Acme Klein Bottles.

There is a tube (or other channel) that runs from an opening near the bottom of cup upwards to a certain height, and then down through the base of the glass.  Provided the water level does not go above the upper part of the loop, it cannot escape out through the base. 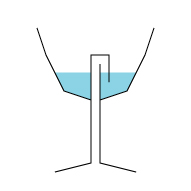 But if the cup is filled above the loop, it spills over on the inside and drains out of the bottom! 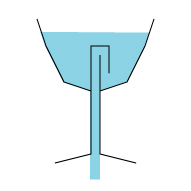 The surprising thing here, and what makes this a reasonable physics demonstration as well as a cute trick, is that the cup drains completely once the process is started.  The unlucky drinker has created a siphon in their glass, the same process by which one can use a hose to drain a fuel tank, or (ick) a septic tank.

It is a little more tricky to explain how a siphon works!  In short, the weight of the water falling through the lower portion of the tube at the base of the glass reduces the pressure at the upper portion of the tube, allowing water to be “pushed” into the tube by the weight of the water remaining in the glass.  This explanation has been surprisingly controversial, however, as it has been demonstrated that some siphons can work in a vacuum, suggesting that intermolecular forces can play a significant role in “dragging” the liquid through the tube.  As far as I know, however, the atmospheric pressure explanation sufficiently matches the observational evidence under most circumstances.

Do you want your own Pythagoras cup?  As I have noted, you can purchase decorative ones on eBay directly from a Greek seller.  You can purchase a clear one, showing clearly the inner workings of the device, from Acme Klein Bottles, which sells a lot of entertaining mathematical glassware (including, obviously, Klein bottles).  The packaging of the cup includes a lot of great mathematical humor and is almost worth the price of purchase all by itself!

This entry was posted in Physics demos. Bookmark the permalink.