A. Merritt’s Seven Footprints to Satan

Abraham Grace Merritt (1884-1943) was an author with an vivid and bizarre imagination!  Among his surreal fiction stories one can find a hive-like race of metal, electrically powered geometric shapes (The Metal Monster, 1920), a colossal stone face dripping tears of gold above a massive abyss (The Face in the Abyss, 1923), a lost world hidden in a valley concealed by a massive mirage (Dwellers in the Mirage, 1932), and a battle between gods taking place on a boat sailing interdimensional seas (The Ship of Ishtar, 1924).

Merritt was wildly popular in his time, but most of his works are out of print and can be quite hard to find.  I recently finished one of the rarer of Merrit’s books, namely Seven Footprints to Satan (1927): 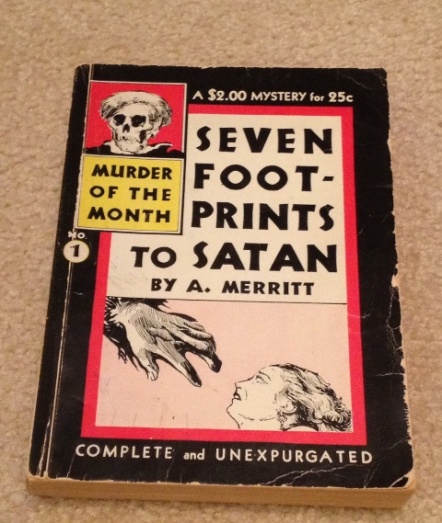 My 1942 edition of Seven Footprints to Satan.

I’ve actually had Seven Footprints on my shelf for a couple of years.  At first glance, it looked to be a rather mundane tale about Satanism similar to the works of Dennis Wheatley that I’ve discussed before (and will return to in a later post).

Boy, was I wrong!  Seven Footprints to Satan is a surprisingly engaging thriller and weird tale about an evil super-genius, his ingenious schemes, and a diabolical wager he poses that can cost losers their very souls!

The story begins as famed explorer and adventurer James Kirkham leaves his room at the Discoverers’ Club for the evening.  For days, he has had the distinct feeling of being watched, and he finally decides to take a walk after dark to try and draw out his surveillance.  He gets more than he bargained for, however, when he is abducted without violence in a finely orchestrated plan.   He is taken to a fortified complex in the countryside where he is brought face to face with… Satan himself!!??

Satan is a unique and amoral genius who has used his superior intelligence to secretly secure wealth and influence from around the world.  Many of the most powerful politicians, businessmen and celebrities are his servants, if not his worshippers.  His home is both a fortress and a prison, filled with secret passages, luxury suites and torture rooms.

Kirkham’s exploits have caught Satan’s attention, and Satan has summoned him to offer him a wager.  Kirkham must walk the seven footsteps of Satan, which could lead to Kirkham achieving ultimate power, becoming Satan’s servant… or losing his soul.

Satan has devised a challenge, supposedly inspired by the seven footsteps that the Buddha took upon his birth.  Satan has twisted the concept and built a platform of seven steps leading up to his black throne and, above it, a golden throne that will be taken by the one who wins his challenge.  And the challenge?  Four of the steps, chosen randomly by a mechanical device, are “good” steps, and the other three are the steps of Satan.  A challenger can step on up to four steps at one sitting.  If he manages to step on only the four good steps, he wins the right to earn Satan as a loyal servant, with all the power and wealth that comes with him.  If one step is Satan’s, however, the challenger must do a single favor for Satan, no questions asked.  If two steps are Satan’s, the challenger must serve Satan loyally for an entire year.  If three of the steps are Satan’s, the challenger sacrifices his life and immortal soul to Satan for all time.

Kirkham, against his will, agrees to take the challenge.  At stake is not only his life but the fate of a lovely woman named Eve, whom Satan has his own horrifying plans for.  So Kirkham plays along, working with Satan in order to buy time to defeat him.  But how to you defeat the most intelligent and powerful man in the world?

With this setup, the book plays out as an intricate cat-and-mouse game between the brave Kirkham and the cunning Satan.  Other characters come into play as the story progresses, but the loyalties of this newcomers is uncertain.  I was completely hooked from the first chapter and finished the book within twenty-four hours.  Though not as supernaturally bizarre as other of Merritt’s novels, I think Seven Footprints is one of my favorites.

A one-in-thirty-five chance of earning Satan’s unending servitude.  If those odds seem rather good for such a payoff, you’re being incredibly astute!

The only downside of Seven Footprints is the mild racism that permeates it, a phenomenon that was sadly common for the time.  Satan’s servants include an evil African executioner and a mindless horde of hashish-eaters who are clearly modeled on Middle-Eastern assassins.  Satan himself is presented as being vaguely Asian; in fact, he is clearly inspired by the sinister Chinese criminal mastermind Fu Manchu introduced by Sax Roemer in 1913.  The weird racial choices, which are not integral to the story, were only a minor distraction to me while reading.

One of the most fabulous parts of Seven Footprints is the execution of one of Satan’s master plans, a daring daylight robbery of a priceless artifact from a public museum.  Kirkham is treated almost literally as a chess pawn in his role, being told exactly the moves he needs to make but not why; for example:

“You will do exactly as I am telling you. You will pay no attention to the guards. You will pay no attention to anything that may be happening around you. Remember, James Kirkham, this is vital. You will have but one thought–to open the case at exactly 2:15 and walk out of that room with Senusert’s necklace in your possession. You will see nothing, hear nothing, do nothing but that. It will take you two minutes to reach the cloak room. You will go from there straight to the outer doors. As you pass through them you will step to the right, bend down and tie a shoe. You will then walk down the steps to the street, still giving no attention to whatever may be occurring around you. You will see at the curb a blue limousine whose chauffeur will be polishing the right-hand headlight.”

Cryptic, no?  Well, Satan’s plot is both ingenious and diabolical, and well worth reading.

The same goes for the entire book!  I was hesitant to read Seven Footprints at first, but was delightfully surprised by it.  Now I’m going to have to scare up the rest of Merritt’s obscure work.

For those interested in reading Seven Footprints to Satan but not eager to hunt down a used copy, it can be read on Project Gutenberg Australia.

This entry was posted in Mystery/thriller. Bookmark the permalink.

9 Responses to A. Merritt’s Seven Footprints to Satan