Posted on July 5, 2013 by skullsinthestars

H.P. Lovecraft not only introduced a fundamentally new genre of horror — “cosmic horror” — but inspired generations of writers who have built on his ideas and taken them in interesting new directions.

Valancourt Books recently released a new edition of The Great White Space (1974) by Basil Copper.  I snapped it up right away and devoured it (metaphorically, of course) over the course of a day. 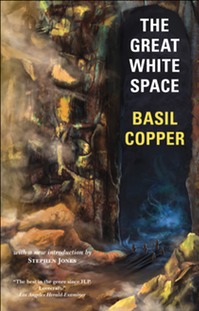 Basil Copper (1924-April 2013) was an incredibly prolific author who wrote novels and short stories in horror and mystery.  His first professionally published story appeared in 1964, a horror story titled “The Spider.” He would go on to have a long relationship with the classic Lovecraftian publisher Arkham House, which curiously did not publish his 1974 ‘Space.

The Great White Space is a wonderful novel of cosmic horror, very much reminiscent of Lovecraft’s classic At the Mountains of Madness (with shades of The Statement of Randolph Carter, The Shadow Out of Time and a few other stories).  It is one of the best Lovecraft stories I’ve read which wasn’t written by Lovecraft himself!

The novel is the narrative of scientific photographer Frederick Plowright, describing the ill-fated expedition to find “The Great White Space,” supposedly a portal from Earth to the distant parts of space through which powerful and unspeakable beings travel.  He is recruited for the expedition by the charismatic and tenacious Professor Clark Ashton Scarsdale, who had nearly found the legendary place on a previous journey — and nearly lost his life in the process.

On the new expedition, Scarsdale has gathered a team of experts to help him on the journey, and has prepared for every occasion, bringing tractors, pistols, machine guns, and even hand grenades.  Traveling to an undisclosed remote location in the far east, Scardale’s expedition crosses vast stretches of wasteland, meets isolated tribes, climbs the shunned Black Mountains, and finally enters a system of tunnels that have been burrowed deep into the mountainside.  These tunnels possess doorways five hundred feet high, designed for the passage of something more or less than human.  At the end of their journey, the researchers will find The Great White Space — but only one of them will survive to return and tell his story.

I am a huge fan of expedition stories where researchers travel to accursed places and find far more than they bargain for.  Lovecraft’s At the Mountains of Madness is perhaps the greatest of these tales, but Copper’s The Great White Space really compares well to it and in fact stands on its own.  Copper does a really good job of slowly building a sense of dread as the expedition gets further and further into the wild and then deeper into the earth.  Scarsdale’s precautions, including the high-powered armament, is only revealed to Plowright relatively late in the journey, also foreshadowing doom.  Part of the fun of the novel, in fact, is seeing what sort of additional preparations Scarsdale has made for the journey.

Copper’s descriptions of the underground tunnels and the city that lies within it are captivating and give an appropriate sense of awe and horror.  He really does it right, providing enough detail to paint a vivid picture but only giving hints at greater secrets, leaving the underworld a place of mystery and horror.

The culminating horror is well worth the wait, and the novel even ends with a bit of a twist that is again very much in the line of Lovecraft’s original work.

I think it is fair to say that Copper does not break new ground in The Great White Space, but the novel is one of the best examples of cosmic horror that I’ve read and it is well worth a read.

(Like all Valancourt editions, the book includes an excellent introduction.)

This entry was posted in Horror, Lovecraft. Bookmark the permalink.