The Challenge from Beyond, with Moore, Merritt, Lovecraft, Howard, and Long

Posted on September 2, 2013 by skullsinthestars

No matter how much classic weird fiction I read, there is still plenty out there that I have not read, or even heard about.  Recently I was surprised to learn about a five-part tale of weirdness, The Challenge from Beyond (1935), written by some of the greatest authors of weird fiction of the era: C.L. Moore, A. Merritt, H.P. Lovecraft, Robert E. Howard, and Frank Belknap Long. 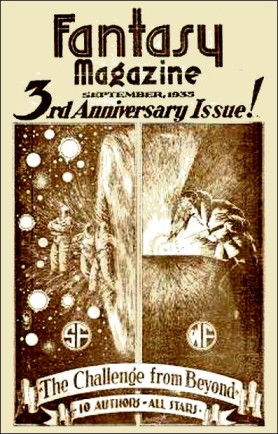 All of the authors of The Challenge from Beyond have found enduring fame, and all but one have been featured prominently on this blog before.  Catherine Lucille Moore (writing under C.L. Moore) was one of the very first female authors of fantasy and science fiction, and I have written before about her amazing fantasy stories featuring Jirel of Joiry.  Abraham Merritt was an extremely popular writer of weird fiction, and I consider his novel The Metal Monster to be one of the greatest works of weird/science fiction of all time.  Howard Philips Lovecraft, of course, was the founder of the genre of “cosmic horror” and revolutionized the field of horror with stories such as The Call of Cthulhu, and spawned many followers that persist to this day.  Robert E. Howard was the creator of Conan the Barbarian, among many wonderful characters, and almost single-handedly created the genre of “sword-and-sorcery.” (And this blog is named after one of his stories.) Frank Belknap Long was a prolific writer of fantasy, science fiction and weird fiction, and was a significant influence on all these fields.

However, like most round robins (in my opinion), the whole of the story is less than the sum of its talented parts.  Without any planning of parts, such stories end up being rather linear and very little happens in them, as each author “filibusters” for much of his or her allotted space trying to find footing.  Also, there is a tendency for authors to try and stump the person who follows, which also can be rather jarring when reading.

C.L. Moore probably got things off on the wrong foot to begin with, by setting the story in the wilderness with a single character.  We are introduced to George Campbell, a professor of geology who is enjoying a small sabbatical by camping in the Canadian wilderness.  By pure chance, he stumbles across a strange and ancient artifact, a crystal fashioned into a cubical shape.

In A. Merritt’s portion of the tale, Campbell investigates the cube further, causing it to awaken and propel him through space and time towards another world.  Lovecraft narrates this journey through the cosmos, providing a fictional back-story about the cube and its creators.

This all would seem rather mundane stuff, and would not be worth reading at all, if not for Howard’s work.  I have mentioned that the authors of round robins often tend to try and stump one another; Lovecraft ends his section with the most horrific and terrible twist he could imagine.  Without giving too much away, Robert E. Howard takes this twist — and turns it into something positive and absolutely hilarious!  With the entire tone of the story changed, Frank Belknap Long manages to wrap up the tale with a satisfactory ending.

I recommend reading ‘Challenge simply to see Howard’s dramatic course-correction to the story, and it can be read either at Project Gutenberg or at Wikisource.  I have a few more spoiler-laden thoughts about the story below the break, though I encourage folks to read it first.

The transition between the Lovecraft and Howard sections of ‘Challenge perfectly exemplify the different philosophical and writing styles of the two men.  Lovecraft, an atheist and very scientifically literate man, focused most of his stories of “cosmic horror” on the concept of humanity’s insignificance in the universe.  We are but an insignificant speck in a vast cosmos that acts according to mind-bending laws of physics and is utterly indifferent to our existence.  Though Howard could certainly write tales of horror and interweave it into his fantasy tales, he was much more interested in tales of heroism and the ability of humans to overcome incredibly daunting odds.

Lovecraft ends his section with what must have seemed to be the ultimate cliffhanger and horror — the transport of Campbell’s mind into the body of a horrible alien thing:

Here, indeed, was outré nightmare at its height — capricious fantasy at its apex. But even this vision of delirium was not what caused George Campbell to lapse a third time into unconsciousness. It took one more thing — one final, unbearable touch — to do that. As the nameless worm advanced with its glistening box, the reclining man caught in the mirror-like surface a glimpse of what should have been his own body. Yet — horribly verifying his disordered and unfamiliar sensations — it was not his own body at all that he saw reflected in the burnished metal. It was, instead, the loathsome, pale-grey bulk of one of the great centipedes.

This idea of being transported into an unfamiliar body was clearly one of Lovecraft’s coup de graces, as he used it several times in various forms in his writing.  In the 1934-1935 story The Shadow Out of Time, a man gets transplanted into an alien body in the ancient past while the alien’s mind takes over his own to study human society.  In the 1933 story The Thing on the Doorstep, a man loses his body to his witchcraft-practicing wife, and ends up in the decaying remains of her own body.

For Howard, however, a loss of body didn’t seem that terrible, especially if you get an awesome new centipede body in its place!  When life gives you lemon centipedes, you, uh, make awesome alien lemonade?

What was his former body but a cloak, eventually to be cast off at death anyway? He had no sentimental illusions about the life from which he had been exiled. What had it ever given him save toil, poverty, continual frustration and repression? If this life before him offered no more, at least it offered no less. Intuition told him it offered more—much more.

With the honesty possible only when life is stripped to its naked fundamentals, he realized that he remembered with pleasure only the physical delights of his former life. But he had long ago exhausted all the physical possibilities contained in that earthly body. Earth held no new thrills. But in the possession of this new, alien body he felt promises of strange, exotic joys.

Unburdened by the superstitions of the centipede creatures, Campbell manages to seize control of the entire civilization, becoming their new king!  The story goes from being a tale of horror to being one of adventure, as well as a bit of a commentary on the banality of modern civilization (something Howard pontificated on much in his work).

I have to go back and check Lovecraft’s correspondence to see how he responded to this rather dramatic transformation of his ideas.  Lovecraft and Howard argued in a polite manner over philosophy in lengthy letters, and I can’t help but see this story as another front in their war of words!

This entry was posted in Horror, Lovecraft. Bookmark the permalink.

2 Responses to The Challenge from Beyond, with Moore, Merritt, Lovecraft, Howard, and Long