“How the Ray Gun Got Its Zap,” by Stephen Wilk (Updated)

Posted on October 21, 2013 by skullsinthestars

I was therefore delighted to learn a few months ago from Stephen Wilk about his new book How the Ray Gun Got Its Zap, which was released early in October. 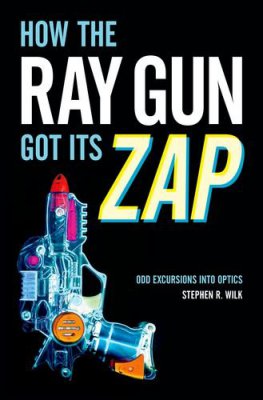 Stephen Wilk is a contributing editor of Optics and Photonics News, the news magazine for the Optical Society of America.  He writes and edits the “Light Touch” column for the magazine**, which as advertised presents lighter and fun stories about optics and science in general.  Ray Gun is a revised and expanded collection of these essays, grouped into sections on History, Weird Science, and Pop Culture.

The articles are wonderfully diverse, entertaining, and thoroughly researched.  Among them, you can read about such subjects as:

There are 45 essays total.  It is actually hard to do justice to many of the articles simply by providing their titles — Wilk finds plenty of surprising “twists and turns” in the even the most seemingly mundane stories, such as the history of the Crookes radiometer, a now-familiar scientific toy with a very convoluted past.

The only caution I would give about the collection is that, although the articles are light-hearted, they were written for a more technical optics audience and sometimes include some mathematics.  I estimate perhaps 1/3 of the articles include some equations, though many of these are still readable to a lay person.  As I noted, many of these articles have been updated with new information, though there is not a clear delineation between old and new material.

Those interested in the history of science and/or optics will find Ray Gun to be a fun collection. I found the essays to be the perfect length for short bedtime reading!

Update: For those interested in learning more, I should point out that Stephen has written a blog post at Oxford University Press on “The first ray gun,” and that he has a blog about his writing at Goodreads.

* I’m hoping to get my own popsci book on optics out there sometime in the future — keep an eye out!

** I know Stephen thanks to his kind invitation to write articles for the Light Touch!  I’ve mentioned several that I’ve submitted in the past — here, here — though unfortunately they require a subscription to read.