Christine Campbell Thomson’s Not At Night (1925)

Posted on November 25, 2015 by skullsinthestars

I gained an opportunity to learn more, recently, when I learned about the 1925 anthology Not At Night (1925), edited by Christine Campbell Thomson.  I found an inexpensive copy online, and soon had it in my hands. 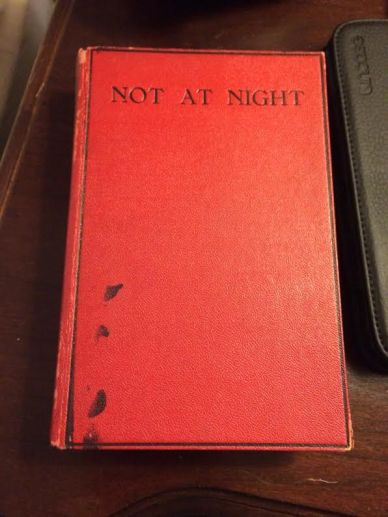 The series was immensely popular in its time, leading to 11 volumes in total between 1925 and 1936.  The first volume alone went through at least 7 reprints; mine is from October of 1927.  The stories were all drawn from the magazine Weird Tales, which was for decades the preeminent source of weird and horror fiction, as well as a regular publisher of Lovecraft’s work.  In 1928, Weird Tales published The Call of Cthulhu, the story that really launched the genre of cosmic horror and transformed horror fiction forever.

In Not At Night, then, I saw an opportunity to get a snapshot of the field as it stood just before this monumental change.  What scared people in the 1920s?  What sort of horror stories did they write?

Let’s begin with a summary of all the stories, in order; it is, in fact, quite hard to find the table of contents online.

So, let me share some impressions about the stories.  First: most of them are not terribly good.  They are utterly lacking in shock value, or even surprises (guess what “Four Wooden Stakes” is about) and are rather amateurish, in general.  I was completely distracted by a lot of the character names in the stories — Doctor Dinwoodie, Guy Steel — which were clearly made up or chosen at random and broke any mood the tales were trying to set.  Of all the stories, only “The Purple Cincture” holds up as really worth reading today.  It is a rather ghastly early example of body horror that makes up for its otherwise predictable plot.

We can get a little feeling of the horror themes that captured readers’ imaginations at the time by looking at the list of stories as a whole.  Mad scientists play a prominent role in many stories, no doubt inspired by Mary Shelley’s classic Frankenstein.  “Monsters of the Pit,” “The Plant-Thing,” “A Hand From the Deep,” “The Case of the Russian Stevedore,” and “The Purple Cincture” all feature doctors or scientists abusing their abilities for personal gain, revenge, or a twisted desire for knowledge.  In “The Third Thumb-Print,” a scientific discovery ends up being abused in a very different way.

Monstrous animals (and plants) are a threat in many of the tales.  In “Monsters of the Pit,” gigantic poisonous spiders are the danger, while in “Death-Waters,” a legion of venomous snakes are the horror.  “The Plant-Thing” features, obviously, a deadly plant, and “A Hand From the Deep” involves a man whose transplanted arm slowly turns him into a crustacean.  “The Tortoise-Shell Cat” is a supernatural story featuring a were-feline, and “The Case of the Russian Stevedore” has an ape imbued with human-like intelligence.  The latter story is reminiscent of Poe’s classic “The Murders in the Rue Morgue,” and likely inspired in part by it.

Speaking of Poe, we also see a number of Poe-like stories of vengeance and obsession in the collection, such as “Black Curtains,” “His Family,” “The Last Trip,” and “The Purple Cincture.”

From that brief summary, one can see that the collection mostly reflects work that was done in the past and doesn’t represent any novel departure from the classics that came before it.  For me, it really highlights how much the cosmic writings of Lovecraft and others revolutionized and revitalized the field of horror.

One thing that the stories do have in common with Lovecraft, though?  Racism.  Lots and lots of racist characters and tropes peppered throughout them.  In the very first story, “Monsters of the Pit,” we have Sahem, a “black giant” who sadistically serves the mad scientist.  “Lips of the Dead” is a story of voodoo in Haiti, and not exactly flattering to the native population.  In “Death-Waters,” the native that the New Yorkers run afoul of is described as a savage with “dark, oily skin.”  In “The Plant-Thing,” the mad scientist is again assisted in his abominable work by dark-skinned retainers who follow orders without hesitation.  “The Tortoise-Shell Cat” is another story of voodoo, in which “Mammy Jimmy” has cursed Vida to steal for her.  “The Case of the Russian Stevedore” is not explicitly racist, though it could be said that having a shaved ape pass as a Russian dockworker is not exactly flattering.  “The Leopard’s Trail” is probably the most racist of all, featuring a stereotypical savage cult of bloodthirsty African natives — though, it is interesting to note, and is noted in the story, that the cult is based on one that actually existed.

That racism was so prevalent in early 20th century horror fiction is not surprising, on reflection, as such stories represent the fears of the public — whether rational or not.  The effects of the end of the Civil War and emancipation were still working their way through the United States, and large influx of Chinese immigrants in the late 19th century led many to warn of the “Yellow Peril.”  In 1913, Sax Rohmer took advantage of this fear when he penned “The Mystery of Fu Manchu,” the first in a long-running series of novels about the Chinese criminal mastermind Fu Manchu.

Poster for the 1965 film The Face of Fu Manchu.

Looking at the prevalence of racism in Not At Night, it occurs to me that, ironically, H.P. Lovecraft may have made horror fiction less racist.  Lovecraft himself was, of course, horribly racist, a moral failing which appeared regularly in his writings.  In his early work, it was sometimes overt: the horror of the 1920 tale “Facts Concerning the Late Arthur Jermyn and His Family” is the discovery that Arthur Jermyn is descended from an African ape goddess.  Miscegenation fears featured regularly in Lovecraft’s work; in the 1931 story “The Shadow Over Innsmouth,” the residents of Innsmouth are degenerate amphibian-human hybrids, the result of interbreeding between the town’s ancestors and evil inhuman creatures from the depths.

So how could Lovecraft make the field of horror less racist? Simply because he had a new vision of horror, the aforementioned cosmic horror, that gave authors something else to capture their fear and imagination.  The idea of a massive, unfathomable, uncaring universe would grow beyond Lovecraft and inspire generations of writers to follow.

I should emphasize that I by no means am trying to exonerate Lovecraft for his awful views.  I just find the contrast between Lovecraft’s personal views and his literary legacy a telling illustration of how a person’s ideas can transcend the shallow nature of the human that imagined them.

With this, I’ve said all of what I wanted to say about the stories of Not At Night, but there’s still more to say about my specific copy of the book.  Used books often have a lot of history associated with them, and mine held a surprise in it, in the form of the following lovely bookplate.

Bookplate for my copy of “Not At Night.”

For those unfamiliar, bookplates are stylish labels usually fixed inside the front cover of the book to indicate its owner.  It seems that the early 20th century marked the beginning of an era of extremely artistic plates, such as the one above.  “Ex libris Norbert L. Lederer” means “from the books of Norbert L. Lederer.’

But who is Norbert L. Lederer?  There is no central webpage about him that I could find, but there are many amazing tidbits scattered around the internet.  First, I found that he was an author of fiction with Lillian Day, apparently detective novels.  The titles I found were Murder in Time (1936) and Death Comes on Friday (1937).

He wrote one earlier book, however, which indicates another of his passions.  Tropical Fish and Their Care (1934) was written by Lederer alone; apparently he had the largest collection of tropical fish in New York City, according to a 1933 New Yorker article written by Geoffrey Hellman and James freakin’ Thurber.

He also seems to have been active in chess organizations.  I found this book about the Bradley Beach 1929 International Chess Tournament that lists Norbert Lederer as the Director.

Finally, I found a 1936 New York Supreme Court case —  “The Authors Club vs. Lucian S. Kirtland, Norbert L. Lederer, Daniel M. Henderson, as Members of the Finance Committee of The Authors Club, in possession and control of the Carnegie Fund, and John J. Bennett, Jr., as Attorney General of the State of New York.”  I have not looked into the case, but it looks intriguing.

It’s worth mentioning that Norbert L. Lederer’s bookplate is legitimately considered art — I found it reproduced on the Ex Libris page of the Richard Harris Art Collection.

So, in purchasing my 1927 copy of Not At Night, I learned about an interesting man about town in New York City in the 1920s to 1930s!   You can learn a lot more than you think from old books.  Now my copy, even more worn after giving it a thorough read-through, is going to a protected and treasured spot on my shelves. 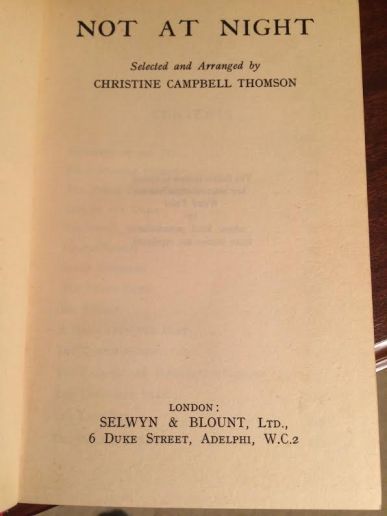 Title page from my copy of “Not At Night.”

7 Responses to Christine Campbell Thomson’s Not At Night (1925)