Posted on February 22, 2016 by skullsinthestars

Here’s the latest summary of Twitter #weirdscifacts!  Click through below the photo of Hedy Lamarr to learn about her contributions to science and technology, among many other surprising science and nature related facts.

30. (January 30). The bladderwort, a carnivorous plant that basically inhales its prey at absurdly fast speeds.  We’ll be seeing a lot about carnivorous plants in these facts, as they are all weird in their own way!

31. (January 31). Famous actress Hedy Lamarr was an inventor of radio frequency-hopping technology!  It is only in recent years that Hedy Lamarr’s remarkable contributions to technology, smashing the stereotype that beauty and smarts are mutually exclusive. I’m pretty sure that the villain of this season of “Agent Carter” is inspired by Hedy.

33. (February 2). Where are the fastest winds in the Solar System? On Neptune, where they reach 1,500 mph!  For comparison, the strongest hurricane wind speeds are around 180 mph.  What is especially baffling is how such winds can be generated in the outer reaches of the solar system, where relatively little sunlight is available to power them.

34. (February 3). 240 people knew of the Trinity test: 239 were science or military, 1 was a cheeseburger cook.  This is a truly amazing story, showing how being a good cook can reap very odd benefits.

35. (February 4). The Beverly Clock, which runs on atmospheric pressure & hasn’t been rewound since 1864.  We’ll see many machines with ridiculously long lifespans as these facts progress!

The Beverly clock, via Wikipedia.

35a. (February 4).  A bonus fact!  Saturn has a very peculiar geometric storm at its pole, in the shape of a hexagon.  This phenomenon isn’t completely understood yet, though similar patterns have been reproduced in fluids in the laboratory.

Time lapse of the polar hexagon, as viewed by Cassini in 2006.

37. (February 6). The simultaneously delicate & indestructible glass “Prince Rupert’s drop.”  How cool is this?  A piece of glass that is near indestructible when hit at one end, but will explode if tampered with at the other.   The video must be watched, because one has to see it to believe it. Wikipedia has more information.

38. (February 7). One of earliest videogames created on oscilloscope in 1958 to entertain bored lab visitors.  Another example (admittedly an odd one, though) of the unexpected benefits of scientific research! 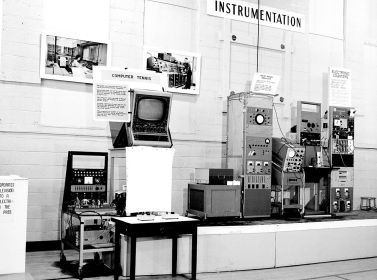 Tennis for Two display, as it appeared in 1959, via Wikipedia.

39. (February 8). Ice age beast honked like a dinosaur!  Strikingly similar features can appear in very different animals, thanks to evolution.

40. (February 9). The Moon’s shadow creates waves in the Earth’s atmosphere, like a ship moving through water.

41. (February 10). Gravitational waves detected; no more need be said!  This was a historic day, with the very first observation of the long-theorized but never seen gravitational waves, ripples in space-time.  Two black holes, each the size of about 30 Suns, came together in a titanic event 1.4 billion years ago, producing changes in the size of the LIGO detector on Earth around 1/1000th the size of a proton.  This is a mind-boggling technological achievement, in addition to an amazing scientific discovery.

42. (February 11). 1961 paper on frequency doubling had main result REMOVED from photo; journal thought it was dirt! There are a number of ridiculous mistakes and oversights in the history of scientific publishing.  In this case, the paper proving frequency doubling actually had that proof removed by an editor!

43. (February 12). The 1967 earthquake in Konya, India: likely caused by humans filling a new dam reservoir.  This is still disputed by the officials responsible for the dam, but it seems extremely likely, especially in light of the modern wave of small earthquakes caused by fracking.

44. (February 13). Parrondo’s mathematical paradox, “a losing game-playing strategy that wins”.  I’ll have to come back to this one in the future and investigate it more, because I don’t understand it!  In essence, it is possible to play losing strategies on a pair of games alternately that lead to overall victory.

45. (February 14). Urohidrosis: some bird species lower their body temperature by defecating on their own legs.  Not really recommended for humans.

46. (February 15). Be afraid: the snakehead fish, an invasive species, can survive out of water for 4 days!

49. (February 19). Early 1895 looping roller coaster, the Flip-Flap Railway, produced 12 G’s and caused neck injuries!  Ignorance of physics knowledge can be dangerous.  It is not a standard calculation in undergraduate physics classes: what will be the G-force at the bottom of a circular loop if a coaster is just barely able to make it over the top of the loop?  To avoid the extreme forces these days, coasters are built with clothoid loop shapes.  The wider curvature at the bottom of the loop results in smaller forces.

50. (February 20). The 1948 Donora industrial smog, which killed 20 and helped spark the clean air movement.  Today we have remarkably clean air in the United States, and with politicians trying to gut the Clean Air act, it’s clear that we’ve forgotten that pollution can kill.  A later analysis of the event indicated that thousands of people could have died if it had lasted much longer.

51. (February 21).  Did you know that there’s a fungus named after Spongebob Squarepants?  Another example of “I found it, I’ll name it something silly!”  In this case, the name is highly descriptive.

53. (February 23). The first voice recording was made in 1860, and was only able to be played back in 2008! The “phonautograph” was only ever intended to record the shapes of soundwaves, not play them back.  It took some dedicated researchers in 2008 to actually convert the printed waveforms back into an audio signal of inventor Edouard-Leon Scott de Martinville singing “Claire de Lune.” (The linked article suggests it was a woman who sang, but later analysis suggested it was de Martinville himself.)

An 1859 phonautograph, via Wikipedia.

That’s it for this edition! Tune in a couple of weeks from now for more weirdscifacts!