Ever since I read Dmitry Glukhovsky’s sublime 2005 novel Metro 2033, I’ve been interested in reading more Russian science fiction.  The next natural choice was the classic 1972 novel Roadside Picnic, by Arkady and Boris Strugatsky. 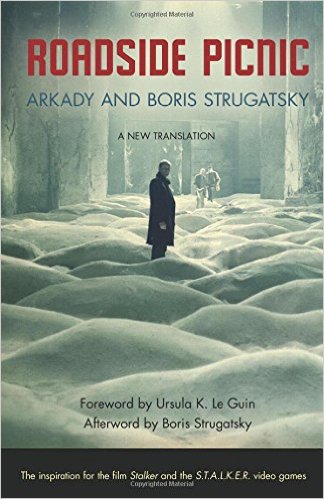 It’s a bit daunting to write a blog post about a book that is widely regarded as one of the greatest science fiction novels of all time, and deservedly so: what can I add to the discussion that hasn’t already been said?  I won’t presume to add new insight about the book, but will simply share those thoughts that occurred to me while reading.

Roadside Picnic is set in the years following an extraterrestrial event on Earth, known as the Visit.  The beings landed in six Zones across the planet, stayed for only two days, and then left, without making any contact with humanity.  In their wake, they left their “trash” behind — their visit is believed to have been a temporary and inconsequential rest stop in a longer journey, a “roadside picnic” — and this trash consists of technology advanced far beyond human understanding that could revolutionize the world. However, it also includes deadly and incomprehensible waste that can be immediately fatal — or worse.

Literally every step into one of the Zones is potentially deadly.  Though governments are slowly making incursions into them and bringing out objects for study, those making real progress are the stalkers — rogue men who sneak in unauthorized and bring out tech to sell to private interests.

The novel follows one of these stalkers, Red Schuhart, over years of his life as he operates around the exclusion zone near the fictional town of Harmont, Canada.  We see him struggle to survive in a community which grows increasingly desolate and inhospitable due to the presence of the zone, and live an almost normal life with a wife and daughter.  The zone effects everyone who comes into contact with it, usually for the worse, and Red’s own family is gradually devastated by his illegal career.  At last, he must risk everything for one last score: a hunt for a legendary object that could change the entire world.

Roadside Picnic is another novel, like the later Metro 2033, that is a brilliant mixture of science fiction and horror.  Metro 2033 clearly draws much inspiration from the iconic Picnic, even reusing the name “stalker” to describe those who would venture into alien and deadly areas.  In an afterword by Boris Strugatsky in the most recent translation of Roadside Picnic, the author says a bit about the term. A sample:

We were the ones who introduced the English word “stalker” into the Russian language.  Stalker — pronounced “stullker” in Russian — is one of the few words we “coined” that came into common use.  Stalker spread far and wide, although I’d guess that this was mainly because of the 1979 film of that name, directed by Andrei Tarkovsky and based on our book.  But even Tarkovsky latched on to it for a reason — our word must really have turned out precise, resonant, and full of meaning.

The movie is also considered a classic, with powerful imagery such as that used on the cover of the reprinted novel, shown earlier.  I have yet to watch it, but I have snapped up the DVD and am waiting for a quiet time when I have 2 hours and 43 minutes to spare!

The novel also inspired a series of videogames, though they are much more loose interpretations, set in the Chernobyl Exclusion Zone after a second meltdown catastrophe creates an area of strange and dangerous otherworldly changes to living creatures within it.  There are three “stalker” games now, STALKER: Shadow of Chernobyl (2007), STALKER: Clear Sky (2008), and STALKER: Call of Pripyat (2009). I also have not yet had time to play these games, though they are generally well regarded. 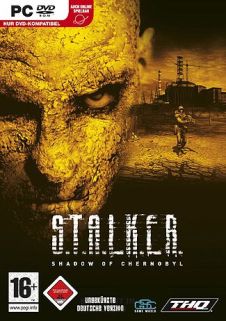 What makes the story of Roadside Picnic so powerful?  One thing it captures magnificently is a feeling of humanity’s smallness: in the novel, human beings don’t rate a direct encounter from aliens, and must resort to scrounging for trash in the hopes of learning something of value. This aspect reminded me of another classic of science fiction, Arthur C. Clarke’s Rendezvous With Rama, curiously written at almost the same time.  In Rama, humans explore an ancient and seemingly abandoned massive spacecraft that is simply passing through the solar system.  There, as in Picnic, human beings work hard and risk their lives for a small scrap of enlightenment, and there is an overall feeling of human insignificance.  The two novels express this with a very different tone, however: in Rama, the only danger comes from ignorance, whereas in Picnic there are many actively hazardous and deadly traps awaiting the stalkers.

It only occurred to me much later how this idea of human insignificance might be an allegory for another, very tragically human, experience: civilians struggling to survive in an active war zone.  The alien dangers that the stalkers face are reminiscent of the dangers that a foraging civilian might face: unexploded ordinance, booby traps, structural instabilities, and even hostile forces.  I don’t know if the Strugatskys had this in mind while writing the novel, but the idea struck me quite hard.

Part of the power of Roadside Picnic, for me, lies in its ability to work both as a science fiction novel and a horror novel.  The many dangers of the Zones are truly ghastly, and I found myself shuddering at some of the fates that ended up befalling luckless stalkers.  But horror tends to be ineffective without realistic characters suffering under it, and Picnic does a wonderful job of getting the reader to sympathize with Red Schuhart.  You likely will not agree with all of his actions throughout the novel, but you will at least understand why he makes the choices he makes.

I have already mentioned the afterword by Boris Strugatsky in the most recent translation. One of the most fascinating parts of the reminisces is the difficulty that the authors had getting the book past the Soviet censors, but not necessarily for the reasons you would expect.

It didn’t even cross our minds that the issue had nothing to do with ideology.  They, those quintessential “bloody fools,” actually did think this way: that language must be as colorless, smooth, and glossy as possible and certainly shouldn’t be at all coarse; that science fiction necessarily has to be fantastic and on no account should have anything to do with crude, observable, and brutal reality; that the reader must in general be protected from reality — let him live by daydreams, reveries, and beautiful incorporeal ideas.

In other words, the publication of the novel was held up for years because the people tasked in the Soviet Union with making sure only the “right” things get published actually had no idea what was good, or bad. They simply didn’t “get” the concept of the novel, and held it up because of it.  This, curiously, had never occurred to me: that censors would hold up publication of something not because of ideological issues, but out of simple dickish cluelessness.

Fortunately, the novel eventually did get published, and after the fall of the USSR, it was restored to the authors’ intended version, which we are lucky to have.  Roadside Picnic is undeniably a haunting classic of science fiction and horror, and is a must-read.

This entry was posted in Horror, Science fiction. Bookmark the permalink.