Time for another round-up of weirdscifacts from Twitter!  Read below to find out what this creepy 1873 woodcut is depicting.

187. (July 6). This planet with three suns shouldn’t even exist!  Did you think Tatooine was a bit of a stretch, with two suns?  Solar system dynamics continue to surprise.

188. (July 7). Mustard gas — a deadly weapon in WWI which led to the first chemotherapy drug.  Sometimes, a horrifying discovery can lead, in the end, to something positive.

189. (July 8). H.A. Ward, geologist and museum pioneer, was Buffalo, NY’s first auto fatality *ever,* in 1906. This is a reminder that scientists are a part of history, and effected by it. I’ve visited Ward’s grave in Mount Hope Cemetery, by the way, and taken awesome photos.

191. (July 10). 1955: astrophysicist Margaret Burbidge posed as her husband’s assistant to work at men’s only Mt. Wilson Observatory.  This is a sad reminder of how historically difficult it has been for women to get equal treatment in science, and how clever women have been in getting around those obstacles.

192. (July 11). Ancient Australians made immortal art w/ fungus!  Art eventually decays, sadly: paint fades, stone erodes. But when fungus finds a healthy growing place in the lines of the artwork, it can last much, much longer.

193. (July 12). This species of Brazilian monkey has been using stones as tools for 700 years! More evidence that humanity’s claim to uniqueness through tool use is, well, overstated.

194. (July 13). Hymenoepimecis argyraphaga — the wasp that makes zombie spiders!  You know, I still think that a zombie apocalypse is unlikely, but there are a disturbing number of creatures that can make their own zombies.

196. (July 15). Big bird: A species of extinct moa *stood* 12 ft high! I’ve been obsessed with the giant species of moa since I was a teenager!  Though some species disappeared earlier than others, the moas were driven to extinction by humans around 1440 C.E. 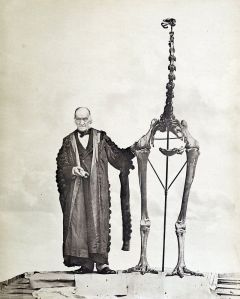 Paleontologist Richard Owen posing with a moa skeleton, circa 1879.

197. (July 16). How WW2 bombers inadvertently changed English weather. Cloud cover can really influence the temperature of an area, and so many bombers went over England during the war that they had a measurable impact on the weather.

199. (July 18). The bizarre mathematical conundrum of Ulam’s Spiral.  Prime numbers — numbers that are only divisible by one and themselves — are of fundamental importance in cryptography and have many, many interesting characteristics.  Many of these characteristics, however, we don’t really understand! What does Ulam’s Spiral — a tendency for primes to cluster on diagonals — mean? Nobody knows, yet.

Representation of Ulam’s spiral, via Wikipedia.

200. (July 19). Halomonas titanicae, a new species of bacteria found in 2010 to be eating the Titanic!  As if the Titanic didn’t have a rough enough time, the remains of the ship may deteriorate completely in a few decades due to bacterial action.

201. (July 20). How a Guy From a Montana Trailer Park Overturned 150 Years of Biology.  The emphasis of the “trailer park” is kind of rude, but the scientific detective story is fascinating. Also, it is always inspiring to see someone make a great discovery after coming from humble beginnings.

202. (July 21). Anophthalmus hitleri — a blind cave beetle that was named in honor of Adolf Hitler!  It was named after Hitler when he became chancellor, and before he earned his infamy. It is now, however, sought after by Hitler memorabilia collectors as a result of its unfortunate name.

203. (July 22). Ancient ‘toilet paper’ proves that Silk Road travelers spread parasites as they traveled.  On the one hand: fascinating! On the other hand: eeeew.  Incidentally, I visited the historical site where the Silk Road began in China last year. I didn’t get any parasites, to the best of my knowledge.

The “starting point” of the Silk Road; my own photo.

204. (July 23). The Evolutionary Trick that Lets Bowhead Whales Grow So Big. More of a hypothesis, but a fascinating one. The headline sounds like clickbait: “grow so big with this one evolutionary trick!” 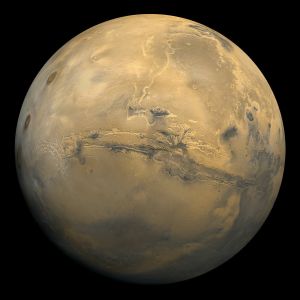 Valles Marineris on Mars, in the center. Massive. Via Wikipedia.

206. (July 25). Polar explorer Charles Francis Hall died on a North Pole expedition — likely poisoned by his crew. A fascinating forensic story.  Hall’s remains were sought out and excavated in 1968, showing high levels of arsenic.  This is the creepy 1873 woodcut shown at the beginning of this post.

That’s it for now — tune in soon for more weird science facts!