Posted on January 2, 2017 by skullsinthestars

This is it — the last regular installment of my Twitter weird science facts! I’ve done a full year of weirdscifacts, averaging one fact per day for the entire year (though I’ve had to play catch up on missed days quite often).  It’s quite a lot of work to find and post reliable facts every day, even with the amount I’ve got backed up, so I won’t be continuing the series at this time.  You can always read the whole series of this year, and past years, by clicking this link.

Read below to learn about the long history of dropping balls to signify time, as in this 19th century image!

Engraving from the “Illustrated London News”.

360. (December 26). Walruses use birds as toys — dead, or alive.  Lots of animals engage in play activity, though walruses had not been known to do so — or to use live birds as their toys.

361. (December 27). N-rays: the weird mysterious rays discovered in 1903 that turned out not to exist.  “Discovered” by French physicist Prosper-René Blondlot in Nancy, France (the “N” in “N-rays”), the mysterious rays seemed to fit in quite well with cathode rays, X-rays, ultraviolet rays, and so forth. However, it was later shown that the findings were simply the experimenters seeing in their data what they wanted to see.

362. (December 28). The horrific 1983 Byford Dolphin decompression accident. (warning: grisly description).  This is a testament to the destructive power of pressure differences as well as the importance of proper safety procedures.  In this accident, a decompression chamber was vented improperly with deadly consequences.

363. (December 29). Horseshoe crab blood — an important ingredient to detect bacterial toxins in medical devices.  Horseshoe crabs look silly and seem to be an evolutionary “throwback” of little import; however, their blood turned out to have a significant medical purpose.  This is a reminder that we should not take any of the biodiversity on our planet for granted. 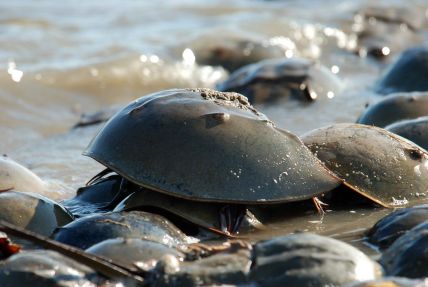 A horseshoe crab, via Wikipedia.

364. (December 30). The underwater diving-bell spider, which actually uses its webs as gills!  This is quite an amazing adaptation! Check out the video below to see it in action.

365. (December 31). There are earthquakes in Maine due to ground relaxing from weight of ice during last Ice Age!  The last Ice Age ended some 14,000 years ago, yet the ground has not yet fully relaxed from the pressure of all the ice present.  It is hard to appreciate how geologic effects can linger over such long timescales.

366. (January 1). The long history of dropping balls to signify the passing of time, and not just on NYE.

Thanks to all for reading during this long year of weird science, and stay tuned at this blog for other posts on science, history, and fiction!