Posted on March 27, 2017 by skullsinthestars

I’ve been in a bit of a funk the past few weeks and haven’t been reading much.  What I needed to get myself back on track was a nice solid bit of horror fiction, and fortunately I had on hand the most recent novel by Mary SanGiovanni, Chills. 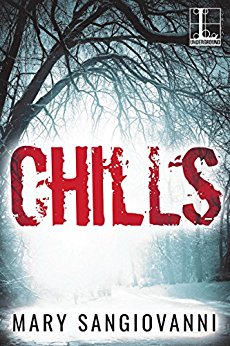 As is made clear from the cover image and the title, Chills centers on a danger that originates in the coldest weather.  A team of detectives and investigators race, in the midst of a blizzard, to solve a series of grisly murders and prevent future ones from occurring.  However, they soon learn that even worse things are happening, and that there are unnatural things in the whiteout…

I’ve blogged about a number of SanGiovanni’s works before, her chapbook No Songs for the Stars and her novels Chaos and Thrall.  In my experience, her stories tend to be fast-paced and fall squarely into cosmic horror, and Chills follows in that vein.

As the story begins, a freak snowstorm has hit a small town in Connecticut in May.  In the dangerous cold and whiteout conditions, a body is found hanging from a tree, branded with occult symbols and apparently mauled by some unknown sort of animal.  Detective Jack Glazier suspects that this is only the first victim of a cult that is using the weather to mask its activities, and he calls in occult crime specialist Kathy Ryan for help.  Kathy quickly realizes that the sacrifice is part of a larger ritual, one that could tear open the gates of our reality and let something else — something horrible — through.  Her fears begin to be confirmed as more victims turn up all over down, and she and the officers realize that some things have already entered our world.  What starts as a murder investigation becomes a fight for survival as well as a race against time to stop the Hand of the Black Stars cult from achieving its monstrous goals.

As I said, the novel is fast-paced.  The first corpse has barely begun to warm up¹ when things escalate and the heroes must fight for their lives.  I might characterize Chills as an action-horror novel, which mixes cosmic horror with well-thought-out fight scenes.  Both the horror and the action work well, in my opinion.

The only thing that suffers a bit from the fast start is the character development, as we have just begun to know a bit about Jack and Kathy and others before they are reacting to supernatural threats.  This isn’t a detriment to the overall story, but felt worth mentioning.

In Chills, SanGiovanni does an excellent job capturing the menace, danger, and even horror of extreme cold.  Extreme winter weather is a natural subject for horror, in its relentlessness, its unforgiving nature, its ability to isolate its victims and its ability to horrifically preserve those that fall to it.  Stephen King’s The Shining is, of course, another famous example of a tale that uses the cold as a setting and subject of horror.  Other examples include Ramsey Campbell’s 1992 novel Midnight Sun and Dan Simmons’ 2007 novel The Terror, which uses the doomed 1845 Franklin expedition to find the Northwest Passage as a setting for supernatural horror.

Incidentally, the Franklin expedition was also used as the inspiration for a truly wonderful horror story in the Marvel Comics series Alpha Flight, centered on a villain named Pestilence.  I quote the Wikipedia description of Pestilence’s origin below, which I cannot better:

In 1845, F.R. Crozier became the doctor and chief science officer for an Arctic expedition led by famed explorer Sir John Franklin, who sought the Northwest Passage. The expedition consisted of two ships, the Terror and the Erebus. During the intervening three years, Crozier became captain of one of those vessels.

Six months after the departure of the expedition, the ships became trapped in the Arctic ice. In November 1847, with supplies running low, Sir John led part of the crew in search of help and was never seen again. In April 1848, Crozier took the remainder of the crew and set out over the ice. Many of the crew died of exposure during the march and were left unburied, and a number of advance scouts were apparently flash-frozen where they stood. With almost no one left alive, Crozier mixed together unknown chemicals and ingested them, inducing a state of suspended animation that the surviving crew mistook for death. His plan was to remain where he fell, allowing the ice to preserve him until the weather warmed enough to revive him. What he did not anticipate was that out of respect for him and his position, his remaining crew decided to bury him. Interred in permafrost, the sun never reached Crozier and he spent the next 140 years buried alive and going insane.

The entombed Crozier is later revived by a hapless Alpha Flight, and his long entombment, combined with the chemicals he ingested and the magic of the area, gives him incredible supernatural powers.  But he maintained his 1840s fashion, which made him particularly creepy: 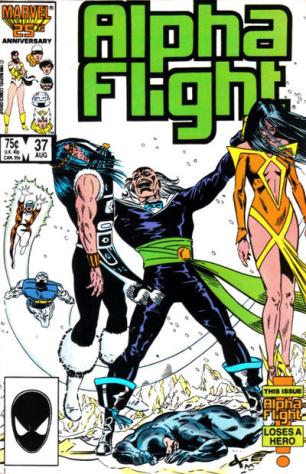 But I’m getting away from the point of this post, as I am wont to do!  I simply wanted to point out that winter and cold are a really good inspiration and setting for horror stories.  Mary SanGiovanni’s Chills is an excellent, fast-paced example of this sort of icy horror.

By the way, I’m acquainted with Mary SanGiovanni on Twitter, and from that know that she has recently started up a Patreon to support her work.  If you enjoy her horror, please consider becoming a patron!

¹ See, ’cause the corpse was frozen from being out in the snow. Get it? GET IT?