Taking a brief break from posts on quantum entanglement — will be back with more on that subject soon! Meanwhile…

Caitlin R. Kiernan is a brilliant writer. This is an indisputable fact.  Several years ago, I blogged about her beautiful, dark and haunting novel The Drowning Girl, a ghost story that I rank as not only a classic of the genre but a classic of literature.  I also was awed by her 2009 novel The Red Tree (which I read but never blogged about, for some reason).

When I found out that a new Kiernan novella came out recently, Agents of Dreamland (2017), I immediately snapped it up. 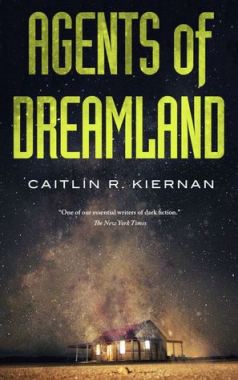 This is a short book — 123 pages — but it provides a disturbing and haunting peek at the beginning of the end of the world.

The novel begins as a government agent known only as the Signalman gets off of a train in Winslow, Arizona on a stunningly hot day.  He is there for an information-sharing meeting with an agent from a rival agency, hoping to gather intelligence that will explain recent shocking events. A week earlier, the Signalman participated in a raid on a remote cabin of cultists.  The horrors the team found there now haunt both his waking hours and his dreams.  As the novel progresses, we will see events not only from the agents’ points of view, but also from that of the cultists.  Cosmic events have been set into motion that could lead to the end of humanity — can the events be stopped, or at least delayed?

I would characterize Agents of Dreamland as “short and creepy.” It is, in fact, a Lovecraftian novella, set explicitly in the universe of H.P. Lovecraft’s tales and closely connected to one of his stories in particular. I will not say which one, to avoid being spoiler-y: in fact, it took me a while to recognize the inspiration, as none of Lovecraft’s invented names appear in the book.  It is just as unsettling a tale if you have never read Lovecraft at all, though fans will eventually recognize the connections.  I might refer to Agents of Dreamland as “Lovecraft for adults,” exploring similar themes and nightmares, but with more broken and well-realized characters.

Lovecraft’s stories always allude to the end of humanity, but most of them never really do more than suggest the possibility. Kiernan does a bit more and gives us a glimpse of what a future dominated by Lovecraftian horrors supreme might look like.

Like all of Kiernan’s fiction, the writing is elegant, intricate, and subtle.  Her writing often seems to be close to the boundary between prose and poetry to me.

It is a short book, so there isn’t much more for me to say about it!  Because of its shortness, it isn’t quite as deep and compelling as Kiernan’s longer novels, but it is a compelling novella and a rather different look at classic Lovecraftian ideas and horrors.