The Cadaver of Gideon Wyck, by Alexander Laing

Posted on February 7, 2018 by skullsinthestars

Got a few physics blog posts in the pipeline, but in the meantime I’m still catching up on a lot of book blogging!

I’ve had The Cadaver of Gideon Wyck (1934) in my library for some time, as I picked up the new Valancourt edition when it first came out in 2016.  However, I got side-tracked in my first attempt to read it, as the book has a very slow, methodical start. I am happy that I came back and finished it, though, as it is a quite unique and weird novel, albeit with some flaws that I discuss below. 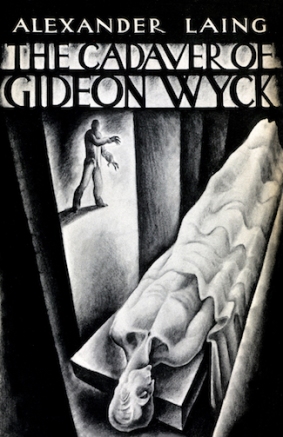 As noted on the back cover, the book was lauded by none other than famous horror author Robert Bloch, who called it “A genuine tour de force… grisly and evocative.”

The book is depicted as a true manuscript penned by a student (known as David) at a rural medical school who has opted to share what he knows of horrific events that have recently occurred, as he has concerns that the “climax could yet be my own death.”  The story centers around the cruel and brilliant doctor Gideon Wyck, who seems to be the focus of numerous disturbing events in the town.  It is whispered that he performed an unnecessary amputation on a patient, and that patient now raves that devils are trying to steal his soul through the stump of his arm.  Babies begin to be born in town with hideous deformities, and Wyck supervised the medical care of the mothers.  When Wyck is found dead under impossible circumstances, everyone in town is a suspect, including the narrator — and the deformed children continue to be born. Can David unravel the various threads of the mystery before even more horrible things happen — and before he loses his own life?

Gideon Wyck is a curious mixture of genres: it is part mystery, part horror, and even a little bit science fiction. This makes it very hard to predict where it is going, which eventually makes it a very compelling read. I say “eventually” because, as I already noted, it is a bit slow-starting. Laing really wrote it as the clumsy narrative of a non-author, and the first few chapters of the book methodically, almost painfully, lay out the history of the town, the medical school, and some of the main characters involved in the mystery.  (There is even a map of the important parts of town at the front of the book, to make clear where everything happens.) The early part of the book also is filled with a lot of descriptions of the daily routine of the narrator and the school itself. This is actually quite fascinating, but takes a bit of patience to get through.

Once David stumbles across a covert meeting between Wyck and another character, the pace picks up, and strange events and revelations keep the story going. The investigation into Wyck’s curious murder is just as intriguing as the secrets of Wyck’s macabre activities, and the plot bounces between the two threads and joins them together in the end.

As the novel is portrayed as a true story passed from the narrator to Laing, the editor, under unusual circumstances, it is also filled with footnotes from the editor. These footnotes sometimes fill in details about the obscure tomes referenced in the text, and sometimes are speculations of the “editor” on the actual location of events in the story, acting as a sort of an odd “meta-commentary” on the novel itself.  I found these to be overall interesting, and they even led me to a few books I need to look into in the future.

Also following in this conceit, the novel is presented in three parts, the first two having been sent by the narrator from Chicago, the third from New Orleans. Part 3 is the weakest of the novel, and ties up all the mysteries and loose ends in a bit too tidy a fashion.  A lot of the eerie dread that is built up in Part 1 and Part 2 is dissipated by the final revelations.

Nevertheless, The Cadaver of Gideon Wyck is a pretty neat and unique novel.  It is a bit of a challenge to read through, but the experience is overall a satisfying one.

I haven’t been able to learn much about the author Alexander Laing (1903-1976), other than an entry in the Encyclopedia of Science Fiction.  It appears that he wrote a number of other novels of weird fiction, and I will be trying to track down the others if I can.

This entry was posted in Horror, Mystery/thriller, Science fiction. Bookmark the permalink.

1 Response to The Cadaver of Gideon Wyck, by Alexander Laing