Of Men and Monsters, by William Tenn

Posted on November 25, 2018 by skullsinthestars

I’ve noted a few times already that the series of SF Masterworks released by the Orion Publishing Group is a great way to get exposed to some great science fiction that has otherwise fallen off the radar in recent years. I’ve read Brian Aldiss’ Non-Stop (1958) and Nicola Griffith’s Ammonite (1992) in this reprint series, and being pleasantly surprised have gone through a number of others that I will blog about in due course.

One of those that I read some time ago and am only getting to writing about now is Of Men and Monsters (1968), by William Tenn.

The story is set in a distant future in which titanic, technologically-superior aliens have conquered Earth. Human civilization has collapsed, and the remnants of humanity have devolved into a primitive tribal state, living in the walls of the aliens’ homes.  From there, they make forays out into the dangerous living spaces, looking for food and supplies to subsist on.

Yes, humans are the mice in the walls of the aliens’ houses.

Of Men and Monsters is a satirical science fiction story, poking fun at humanity and its traditions and biases.  That is not to say that it isn’t a good, compelling story in its own right: beyond its simple and obvious premise, there is a healthy amount of intrigue built into the tale.

The protagonist is a young man named Eric, who is a member of a tribe in the walls known simply as “Mankind.” As a right of passage into manhood, Eric must go out into the dangerous wilds of the alien’s living room and bring back an object of some utility to the tribe.  Eric’s tribe has long held the religious view that humanity must reclaim its glory by rediscovering the secrets of “Ancestor-Science,” the technology that humans held before their defeat. But, just as he is about to depart, Eric learns that his uncle is a proponent of a very different faith: “Alien-Science,” the belief that humans must steal the secrets of the aliens in order to defeat them.

Eric’s mission is haunted by this revelation, and his odyssey into the lands of the aliens is disrupted by unexpected twists in both the alien and human domains.   Soon, he finds himself struggling not only for his own survival, but for that of humanity itself.

Of Men and Monsters reads and plays out very much like an extended episode of a television anthology like The Twilight Zone, and in fact it is an expanded version of his short story, “The Men in the Walls,” that appeared in Galaxy Science Fiction in October 1963.  The novel has enough twists and turns to keep it entertaining throughout, however, including an ending surprise which cements its status as a satirical novel and is immensely satisfying in and of itself. 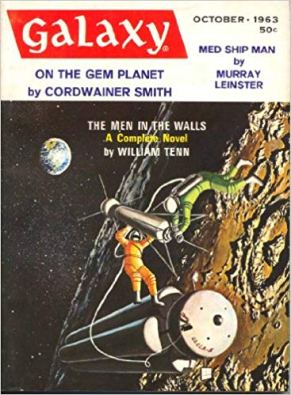 So what is the satire in Of Men and Monsters? My impression is that the story serves both as a critique of our reliance on tradition and faith to solve problems, as well as a not-so-subtle jab at humanity’s sense of self-importance in the cosmos.

It is worth noting that William Tenn is a pseudonym; the author’s real name is Philip Klass (1920-2010).  He began science fiction writing while working as a radar technician at Bell Labs in the 1940s, and his first story, “Alexander the Bait,” was inspired by his own radar work.  After his success in writing, he moved to Penn State University in 1966 where he taught English and comparative literature for decades. 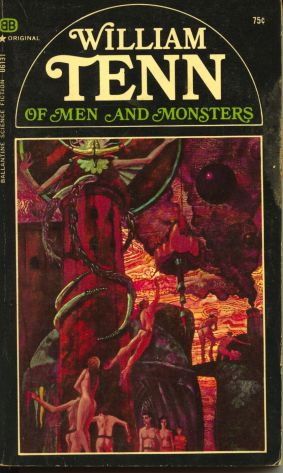 Original cover to Of Men and Monsters.