Pendulums, spheres, and the spinning Earth

Posted on November 22, 2018 by skullsinthestars

The first of what will hopefully be a small series of posts inspired by research on my Falling Felines and Fundamental Physics book, which will be sent to the publisher this week!  Made some small updates for clarity to the post since publishing.

In 1851, French physicist Léon Foucault achieved the seemingly impossible: he discovered a way to bring the motions of the cosmos into the lecture hall for anyone to see and understand.

The invention I’m talking about is now known as Foucault’s pendulum: a free-swinging pendulum that changes its direction of swing over the course of the day, and is a direct demonstration of the rotation of the Earth.

Though people of Foucault’s era certainly were aware of the rotation of the Earth, Foucault’s pendulum allowed anyone to see this motion, in real time.  Soon after Foucault’s discovery, his experiment was set up all over the world. People flocked to lecture halls with pendulums installed; after an hour-long presentation by a physicist, the audience could observe for themselves that the direction of swing had changed, directly in accordance with prediction.

Illustration of an 1861 Foucault pendulum demonstration at the London Polytechnic Institute. Image from The World of Wonders (1883).

Explaining how this latter demonstration works takes a bit of effort, but the payoff is a profound understanding of a deep role that geometry plays in physics. In this blog post, I thought I would discuss everything about Foucault’s pendulum: its history, how it shows rotation, and how it shows the roundness of the Earth.

The discovery of Foucault’s pendulum could be said to be the result of a series of happy accidents. The first of these was the choice of career of Foucault himself. Léon Foucault (1819-1868) originally intended to be a doctor, but his career in medicine was cut short when he fainted at the first sight of blood at a hospital. His professor nevertheless took him on as a lab assistant, and Foucault began a career as a scientific researcher.  His first project was improving the photographic process invented by Louis Daguerre, and Foucault in fact developed a method for taking photographs through a microscope.  News of this work spread, and he was contacted by none other than François Arago to see whether his photography techniques could be applied to imaging the sun, as well.  Foucault and his collaborator Hippolyte Fizeau were successful at this, taking the very first photograph of the sun in 1845.

Daguerrotype image of the sun by Foucault and Fizeau, via NASA.

Foucault hit upon the idea of his pendulum while building some new scientific equipment.  He had fixed a flexible metal rod into the end of a lathe, and had inadvertently caused the rod to vibrate.  He noticed that, when he turned the lathe, the direction of vibration of the rod did not change.  It occurred to him that any freely-oscillating object must  similarly move independently of the rotation of the Earth; a pendulum, therefore, would seem to change direction as the Earth turns beneath it.

The simplest way to understand this is to imagine that the pendulum is positioned right at the North Pole.   As the Earth rotates Eastward, the pendulum will not change its direction: from the perspective of a person looking at it from above, it will be rotating clockwise. After a full 24 hours, the Earth will have rotated 360° East, and the pendulum will have rotated 360° clockwise.  A pendulum at the South Pole will appear to rotate 360° counterclockwise in a day.

Foucault first tested his idea with a small pendulum with a two meter length in a cellar; he was able to detect the small clockwise rotation in less than a minute.  With this success, he then installed an 11 meter pendulum at the Paris Observatory. In only two swings of the pendulum, its displacement could be clearly seen. Finally, Foucault installed a pendulum of 65 meter length in the dome of the Pantheon, in Paris. This particular pendulum is the one that became an international sensation and spurred copies all around the globe. 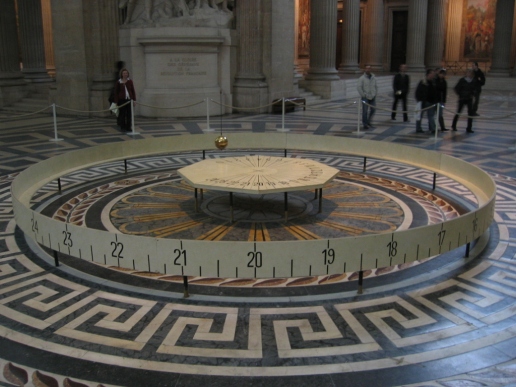 Foucault’s pendulum in the Pantheon. The original only remained from 1851-1855, but in 1995 a replica was installed in the original location which still swings today.

So a pendulum on the North Pole rotates 360° over 24 hours. But what about the pendulum at the Pantheon?  Naively, one might expect that, since the Earth has completed one full revolution in 24 hours, the pendulum must still rotate 360°, since it has moved back to its starting location.

But this is incorrect! The pendulum at the Pantheon rotates 270° clockwise during the course of the day, meaning that it ends oscillating in a different direction then it started, even though it effectively concludes the day at the same point in space that it began.

where “sin” is the trigonometric sine function and

is the angle of latitude on the Earth.

Now we get to the interesting stuff! First of all, why doesn’t the pendulum return to its original plane of rotation even after it returns to its starting position after 24 hours? Second, and related to the first, how does this show that the Earth is a sphere?

We will attempt to answer both questions at once, by the use of a thought experiment. Let us imagine that we have mounted a Foucault pendulum on the top of a car, as illustrated below.

We now imagine that we are driving this car on a large flat plane. (Any small section of the Earth’s surface is locally flat, so this isn’t hard to imagine.)  Now we drive this car slowly in a circle on this flat surface, going in a left-handed direction. The pendulum will of course not change direction, and will appear to circle clockwise relative to the car’s direction of travel. After a full circle is made, the pendulum will be oscillating in the same direction that it started.

Alternatively, we can drive the car in a straight line. Because we’re not turning, the pendulum doesn’t change direction, either.

Now let’s imagine that we drive in a straight line on a spherical surface, like the Earth.  A straight line on the Earth is a great circle — a line that divides the sphere into two halves.  The equator is such a great circle.   If we drive our car on the equator, the pendulum doesn’t change direction, because we’re driving on a straight line, but we nevertheless end up back where we started after we’ve driven the entire way around.  On a sphere, we can get back to our starting place without actively turning our car.

Now, let us imagine that we’re driving on one of the latitude lines on the sphere, such as the line that runs through Paris, where the Pantheon pendulum is.  With the exception of the equator, latitude lines are not great circles, and are smaller than great circles. In order to stay on this latitude line, we must keep our car turning slightly to the left as we drive; otherwise, we’d just follow a great circle. 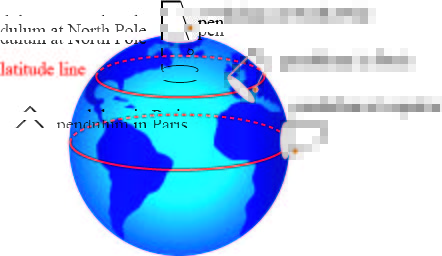 If we follow the latitude line, we will eventually end up back at our starting point. But the shape of the sphere itself will make us return to our starting point, anyway; therefore, as we follow the latitude line, we don’t have to turn as much to get back to our origin as we would if we were on a flat surface. To put it another way: in order to make a closed path on a sphere, we partly do the turning ourselves, and partly let the shape of the sphere take us back where we want to be.

The only time that Foucault’s pendulum changes direction is when we actively turn.  On a flat surface, we have to turn 360° left to get back to our starting place, which means that our pendulum turns 360° right. On a sphere, at the latitude of the Pantheon, we therefore must only turn 270° to the left in order to get back to where we started, so that the pendulum turns 270° to the right.

In Foucault’s pendulum, we have a curious situation in which the pendulum ends up oscillating in a different direction from where it started, even though the pendulum itself has returned to its starting position in space. What we have seen is that this naturally arises from the geometry of the sphere.  Foucault’s pendulum turns out to be a very explicit example of what is known in physics as a geometric phase: a change in the behavior of a system even though it has been brought back into its original condition, a change entirely due to the geometry — real or mathematical — of the system.

Geometric phases arise in quantum physics, optics, and even the flipping over of a falling cat (surprise!) and are one of the most elegant principles in modern physics.  From the use of geometry alone, for example, we can determine how much Foucault’s pendulum will be deflected over the course of a day. In a standard physics course on mechanics, the same result would be derived by calculating the Coriolis force on the pendulum bob, a much more difficult calculation.  The Coriolis force is what is known as a “pseudo-force” that arises due to the rotation of the Earth: because we are accelerating as we follow the path of the Earth’s rotation, any object in flight will appear to be deflected as it travels. Long-range artillery cannons, firing over distances of many kilometers, must have their aim adjusted to take into account the deflection of the shell due to the Coriolis force.

This geometric phase does not arise on a flat surface. If one were to put a Foucault pendulum on a spinning flat disk, like a vinyl record turntable for example, it would rotate 360° every time the record makes one full spin, regardless of where the pendulum is placed relative to the center of the record.  This means that flat Earthers cannot explain the Foucault pendulum by imagining a spinning flat Earth: the actual observed behavior of a Foucault pendulum can be directly connected to being on a spinning sphere.  The mathematical equation given earlier for the amount of deflection one gets for the pendulum can be shown to be exactly what arises for such a case.

So, in the end, Foucault ended up proving much more than most people realize: he not only demonstrated the rotation of the Earth, but also the totality of Foucault pendulum experiments on the Earth demonstrate that the Earth is a sphere!

4 Responses to Pendulums, spheres, and the spinning Earth