Dr. SkySkull in China, Part 6: The Temple of Heaven

Posted on September 14, 2019 by skullsinthestars

On the day we arrived in Beijing, and on the day before I nearly killed myself climbing the Great Wall, we warmed up by visiting another of the major historical landmarks of the city: The Temple of Heaven.  We in fact visited later in the day, having taken the train from Jinan that morning, but still had plenty of time to see the major sites in what is now a lovely historical park.

That image is just a tease to get your attention, but let’s back up for a minute and discuss the Temple of Heaven, its history, and its purpose.

In Imperial China, the Emperor was considered the intermediary between heaven and earth, and indeed the representative of heaven on earth: the Son of Heaven.  As part of his duties, twice a year the Emperor would perform elaborate rituals and prayers for a good harvest; the Temple of Heaven was built specifically for this purpose. The Emperor and his retinue would travel from the Forbidden City to the Temple through Beijing; no ordinary citizens were allowed to witness this procession.

The complex was in fact built at about the same time as the Forbidden City, and by the same Emperor, the Yongle Emperor, the founder of the Ming Dynasty. Construction occurred between 1406 and 1420 C.E., though major additions were made in the 16th century, which was also when the temple received its name.  It remained off-limits to the public until 1918, when it was turned into a park. 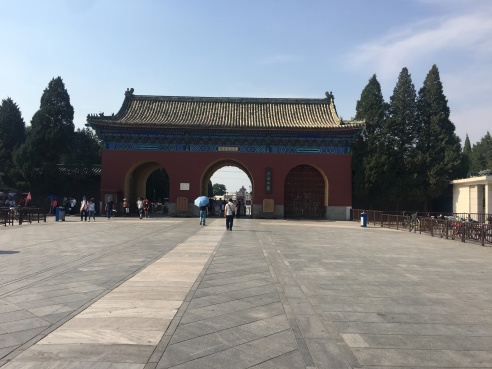 We entered the park through the South Gate, the Zhaoheng Gate. From there it was a short walk to the first major location in the Temple, the Circular Mound Altar.

Constructed in 1530, and renovated and enlarged in 1749, the Circular Mound Altar is exactly what its name indicates: a circular mound that was used as the official altar for the Emperor to pray, particularly for rain. It has three levels of marble stones, and a flat top. Because of this, it is rather difficult to get a good photograph of it!

One thing you can get a hint of from photos is the amount of symbolism that is built into the structure. There are nine steps leading up to each level, and that number represents both the Emperor and the Nine Circles of Heaven.  The number nine is apparently built into the entire altar, including the number of pillars on each wall section, which apparently are multiples of nine — though I did not count them myself!

Circles and squares also feature prominently in the symbolism of the Altar, and the Temple as a whole. Squares represent Earth, and circles represent Heaven. In fact, the outer wall of the Altar is square-shaped, and has square doorways — presumably, the Emperor is passing from Earth into the circular heavenly altar.

From the top of the altar, one can already see the next major landmark in the Temple of Heaven, the Imperial Vault of Heaven. 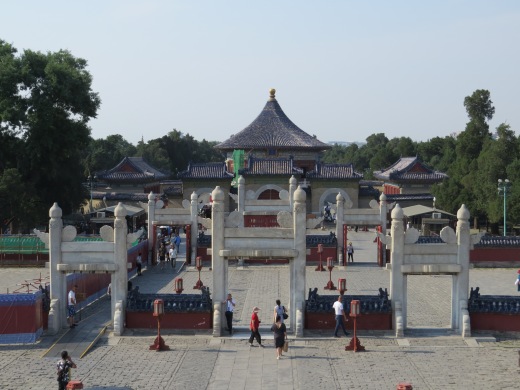 View of the Imperial Vault of Heaven from the Circular Mound Altar.

The Imperial Vault was evidently the repository for holy tablets and writings to be used in the Emperor’s rituals. And they built a truly lovely repository for them.

The interior of the building is also as magnificent as you would expect.

Panorama of Vault interior. Colors have been enhanced slightly to bring out detail.

And it was worthwhile to take a zoomed-in photo of a part of the exterior, to see the intricate detail.

Below is a panorama of the Imperial Vault complex. A curious fact, and one that I did not know to test while there, is that the vault is surrounded by a circular wall, called the Echo Wall, which allows you to hear what people are whispering at other distant locations near the wall. There are a few interesting acoustical effects like that at the Imperial Vault.

Panorama of the Imperial Vault.

Going past the Imperial Vault of Heaven, one finds a 1,000 foot long raised walkway, called both the Vermilion Steps Bridge and the Imperial Walkway Bridge, that connects the Vault to the final major location, the Hall of Prayer for Good Harvests.

View on the Imperial Walkway Bridge.

You may notice that there are absolutely no tree anywhere on the Walkway, near the Imperial Vault, or anywhere on the path the Emperor would take. My hosts said that this was a deliberate choice taken by the builders to make it impossible for an assassin to sneak up on the Emperor.  I was unable to find more information about this online, but it certainly seems plausible. What I know for sure is that the lack of trees on a hot sunny day made it a very intense walk!

At the end of it, after passing through circular (Heaven) arched gates, one is faced with the magnificent Hall of Prayer for Good Harvests.

Hall of Prayer for Good Harvests.

The name of this hall is self-explanatory for its purpose: this is where the Emperor would pray for good harvests. The building is not the original, however: the original hall burned down in 1889 after being struck by lightning, and the current building is a reconstruction built several years afterwards. So it is old, and authentic, but not quite as old as the original.

Even in this photo, one can see the frequent use of the number 9: 9 steps for each level, 9 pillars between each staircase, 9 pillars leading to the top. The interior of the hall, which I was unable to get a good photo of, also uses the number 4 repeatedly, for the number of seasons: there are 4 inner pillars, 12 middle, and 12 outer pillars. 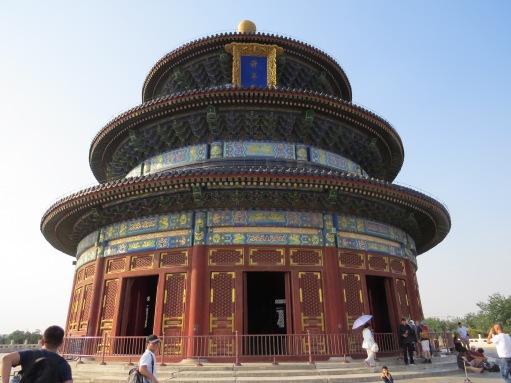 Closeup of the Hall of Prayer for Good Harvests.

It is worth sharing at least one photo showing the details of the gorgeous dragon carvings on the stairs up to the Hall, as well.

On the stairs to the Hall.

Immediately behind the Hall of Prayers for Good Harvests is the Imperial Hall of Heaven, which held the tablet of the “God of Heaven” and the tablets of the Emperor’s ancestors which were to be worshipped in the Hall of Prayers for Good Harvests. According to a sign at the site, the Emperor himself would come to this building to burn incense and perform the divine greetings for the transference of the tablets.

And that was the complex of the Temple of Heaven! On the way out, we noticed that the moon was already high in the sky, and it was worth taking a photo of a part of the actual heavens with the temple itself. 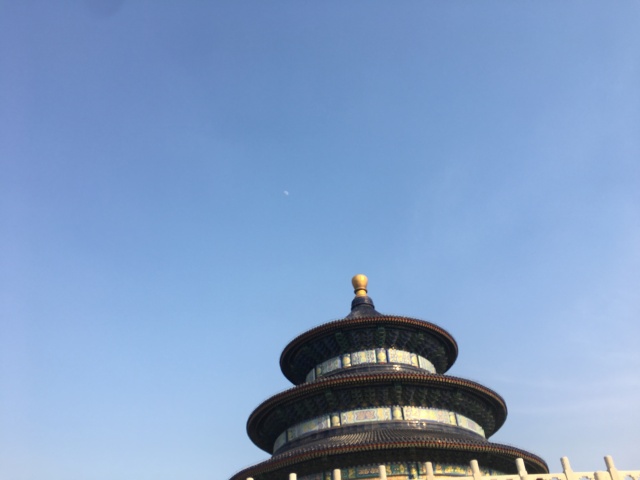 The moon and the temple.

The park around the Temple of Heaven is also worth wandering through. It is a pleasant walk and also includes some additional historic buildings. Most of them were closed at this point in our visit, but the park itself was relaxing.

The Temple of Heaven Park.

One nice sight in the park is the so-called Double Ring Longevity Pavilion, which was apparently originally built by the Emperor Qianlong in the mid- to late-1700s to celebrate his mother’s 50th birthday.  The original pavilion was built in Zhongnanhai, and was moved to the Temple of Heaven complex in 1977.

And that is a summary of our visit to the Temple of Heaven! I would like to end this post with a few additional miscellaneous images, but before I do, I have to share one sign I saw on the way into the Temple complex.  Sometimes the illustrations suggest things very different than intended, especially if the red line is placed in an unfortunate spot… 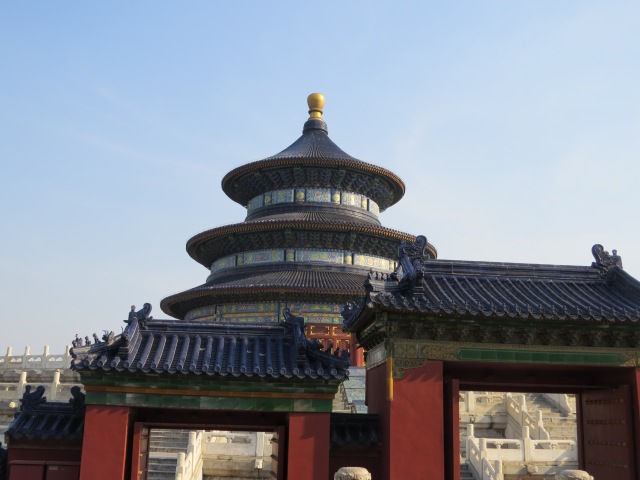 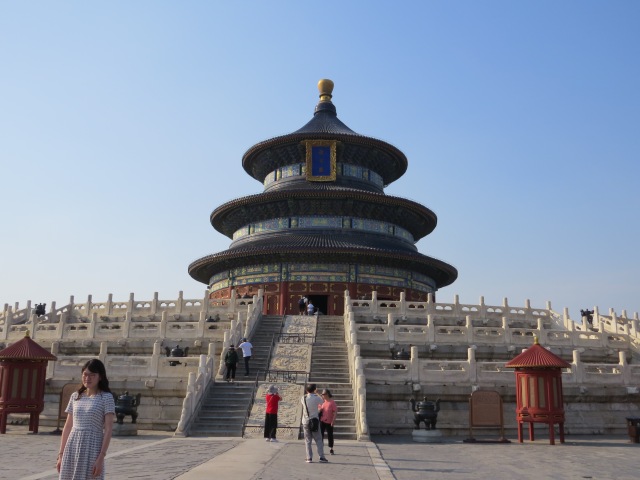