The Third Grave, by David Case

Posted on November 17, 2019 by skullsinthestars

As a big fan of ancient Egypt, I am a sucker for horror novels based on ancient Egyptian mythology.  So when I saw that Valancourt Books had reprinted David Case’s 1981 novel The Third Grave earlier this year, I knew I had to read it!

However, this is a caveat to my reading: I am a big fan of Valancourt editions, but the original edition of The Third Grave was released by Arkham House in a limited printing of only 4,158 copies. I’ve been putting together a humble little collection of Arkham House originals, and I was so captivated by the cover art that I opted to find myself a copy of it (which turned out to not be very expensive). 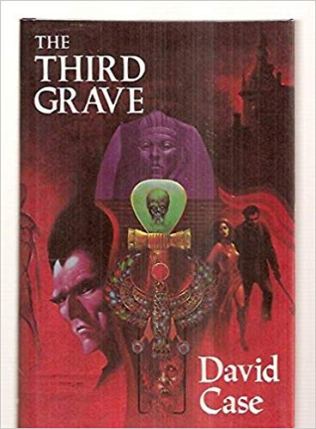 Of course, the text is the same, but I wanted to note which edition I read!

The story is narrated by a young Egyptologist, Thomas Ashley, who on an expedition to Egypt meets an eccentric and obsessive scholar named Lucian Mallory. Though the meeting does not leave a strong impression on him at the time, several years later Ashley is invited to rural Devonshire by Mallory to inspect ancient Egyptian scrolls.

Though he found Mallory a rather unpleasant figure, Ashley cannot resist the opportunity to translate previously unknown Egyptian documents. On his arrival in Devonshire, however, he immediately begins to have second thoughts. A pair of brutal murders have rocked the quiet village, leaving residents fearful of either a madman or a monster. And Mallory himself turns out to have an obsession with the possibility of immortality, a secret which he believes the translations can provide. Ashley hesitantly begins the job, but will uncover horrifying revelations about Mallory, the course of his research, and the nature of humanity itself.

The Third Grave is a lovely, atmospheric read.  It starts off relatively slow, and keeps a leisurely pace throughout most of its length, like the country village it is set in, but it never gets boring. By its finale, it has introduced some ideas whose implications are stunningly gruesome, and it gets there by subverting many of the tropes one comes to expect from horror stories based on ancient Egypt.  It is a relatively short book – 182 pages in the Valancourt edition – and could easily be read in a couple of nights, though I found its pace was well-suited to reading a chapter a night, stretching it out over a week.

One curious thing about the book is that it was published in 1981, but its subject matter suggests it is supposed to be set in a much earlier era — though I don’t recall seeing a specific date mentioned in the text!  The discussion of ancient Egyptian tombs automatically makes me think of the 1920s, as Tutankhamun’s tomb was rediscovered in 1922, and the use of telegrams clearly indicates that it isn’t set in modern times.  The best hint is that Ashley arrives in Devonshire’s pub to find that it has recently installed an “American-style jukebox.” Since the word “jukebox” first appeared in 1940, this suggests that the novel is set in the early part of the 1940s. Of course, Case’s mention might be anachronistic, but the era seems to fit!

So The Third Grave is a short, atmospheric novel about the quest for immortality, and it introduces a number of interesting twists in the story. Recommended for lovers of subtle, thoughtful horror!