Posted on August 12, 2008 by skullsinthestars

I haven’t done any catblogging for a while, which is a shame ’cause I’ve got lots of cute cat photos. Moving into a new house provides lots of opportunities for unexpected cat cuteness. Also, we received a very nice gift in the mail yesterday from my fiancée’s sister Janet, who is an extremely talented knitware designer and author and blogs about it here. Janet has knitted little catnip-filled mice for our kitties before, but the fiancée requested something a little larger that the cats can really wrestle with when the mood strikes them. The result? A catnip rat! It was an immediate hit with the kitties, who each took turns wrestling with it. Zoe’s turn is pictured below:

More below the fold…

Here’s another one of Zoe attacking the rat. with Simon taking a peek from above:

All the cats showed interest, though I wasn’t able to get pics of all of them. Just an hour ago, though, I caught Sabrina, our newest kitty, taking a gnaw on it: 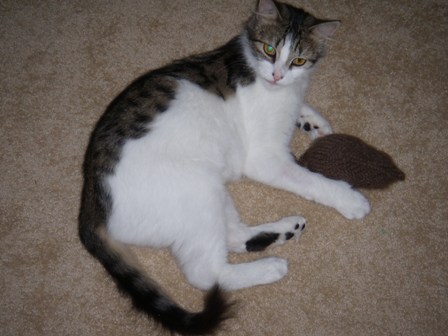 Zoe and Sabrina share a lot of ‘hobbies’ in common. Below are pictures of them doing their best gargoyle impersonations:

Our prettiest cat is, without dispute, Sasha. I snapped a picture of her on the hardwood floors, which made a nice contrast:

I have a few examples of kitty camaraderie. Here’s Simon and Sasha sharing a seat in the sunroom together: 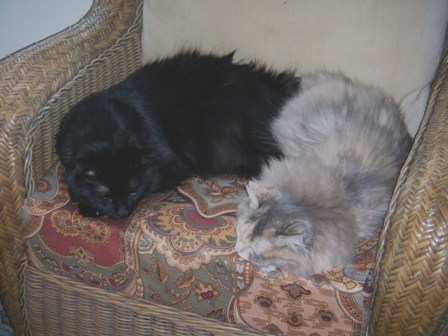 Here’s a truly rare find: we have Zoe, Simon and Sabrina all sharing space on the same loveseat: 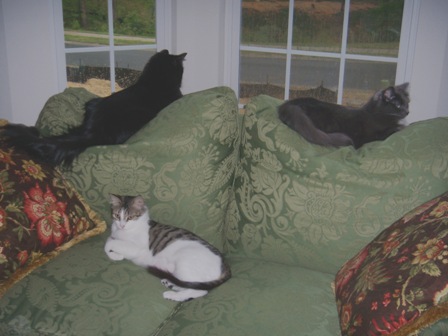 Sabrina and Zoe are friends, to some extent, though Zoe gets crabby and doesn’t like to be bothered at times. Here’s a picture of Sabrina following Zoe’s lead and taking a seat under the kitchen table: 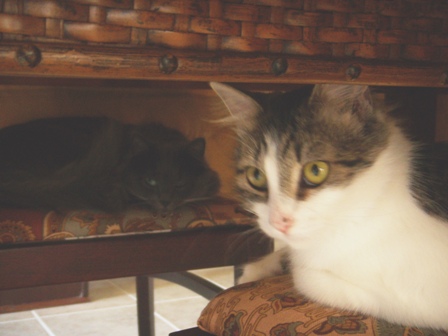 Finally, let me end with a picture of Sabrina during dreamtime. When she falls asleep, she’s out! Her rear right paw was twitching when I took this pic: 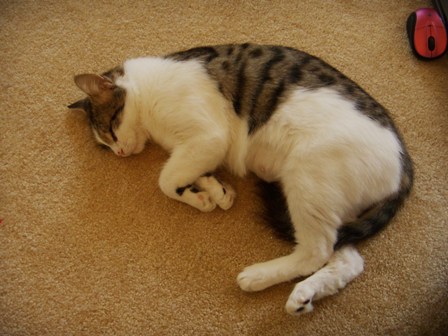 Well, I think I’m pretty up to date with cat pics. My apologies for the kinda crappy quality; I have a really bad camera with low light sensitivity, which makes even brightly lit indoor pics a hassle. Thanks again to Janet for the rat!

This entry was posted in Animals and tagged cats. Bookmark the permalink.