The event in question is the publication of a letter in the Physical Review in 1937, “Visible radiation produced by electrons moving in a medium with velocities exceeding that of light,” by P.A. Cerenkov.  This was the first English paper published on the observation of what is now known as Cerenkov radiation, a discovery that has found numerous applications and made its discoverer a co-winner of the 1958 Nobel Prize in Physics.

I’ve talked about Cerenkov radiation before, in a previous post about “reverse” Cerenkov radiation in metamaterials.  Though I touched upon the basics of the Cerenkov effect there, it seemed worthwhile to go back and look in more detail at how it was discovered!

Pavel A. Cerenkov (1904-1990) was a Soviet physicist working at the Lebedev Institute of Physics in 1934 when he made what was apparently an accidental observation: a bottle of water exposed to radiation emitted a faint blue glow.  Two papers appeared on this phenomenon, one by Cerenkov¹ himself and another by S.I. Vavilov, who seems to have made the same observation independently². 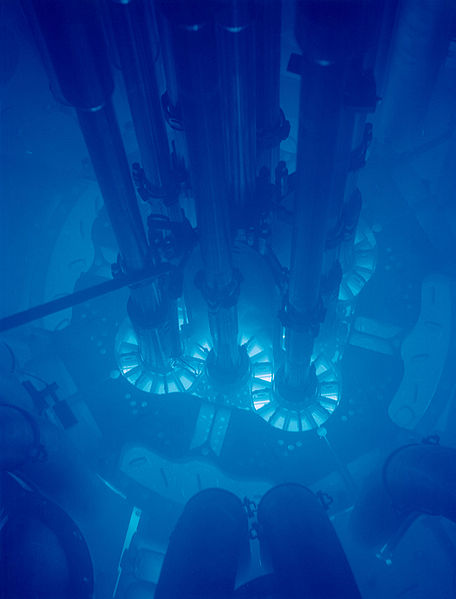 Eerie blue Cerenkov glow in the Advanced Test Reactor at the Idaho National Laboratory, via Wikipedia.

In his Nobel lecture, Cerenkov notes that he and Vavilov were almost certainly not the first to observe the phenomenon; he even suggests that Pierre and Marie Curie had seen it!  However, earlier researchers seem to have discounted the glow as ordinary luminescence, which is extremely common when radiation and liquids are put together.

So how do we explain it?  Cerenkov radiation is, in essence, an optical “sonic boom” which is caused when charged particles travel through matter at a speed faster than that of light.  The best way to describe the effect is to consider the analogous sonic boom of an aircraft³.

When an aircraft is traveling through the air, it produces sound waves that emanate spherically from their point of origin.  For aircraft flying at less than the speed of sound, the aircraft always lies within the spherical waves: 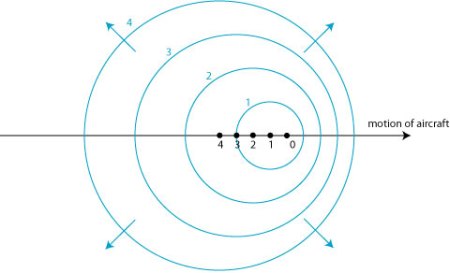 The wavefronts emanated by the aircraft at different times are numbered corresponding to their point of origin.

When the aircraft moves faster than the speed of sound, however, it outruns its wavefronts, basically leaving them behind.  The envelope of those wavefronts form a cone behind the aircraft:

This cone of sound produces a “sonic boom” when it passes an observer.

The opening angle of the cone can be found using some elementary trigonometry, knowing the speed of the aircraft and the speed of sound: 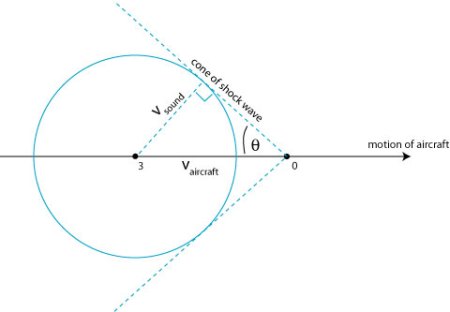 From the figure, it follows that

The faster the aircraft moves, the narrower the cone becomes.

The wake of a boat is clearly not quite analogous to the cone of a sonic boom, as it turns out that the wake of a boat appears regardless of the speed of the boat, whereas sonic booms only occur once a craft exceeds the speed of sound.   The difference in the two effects arises because waves in water are highly dispersive; that is, waves of different frequencies travel at significantly different speeds.  (I discuss dispersion in a “basics” post here.) A moving boat excites waves possessing a broad range of  frequencies, and because of dispersion, there are always some waves excited which move slower than the boat, and therefore produce a wake.  The math of wakes is described in more detail on Wikipedia.

Returning to the sonic boom cone, another way to interpret it is to describe the direction that the emitted shock wave is traveling.  We reimagine our sonic boom figure from above: 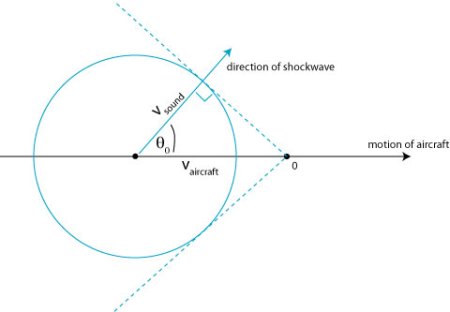 The shockwave travels at an angle

with respect to the direction of motion of the aircraft, where

The sonic boom therefore radiates along a cone of angle

opening along the direction of motion of the particle.

At first glance, it seems that there is a problem in attempting to use this theory to describe “optical booms”: by Einstein’s relativity, matter cannot travel faster than the speed of light in vacuum!  “Vacuum” is the important word, however: when light travels in an ordinary material medium, its speed is reduced by a factor

, which is known as the refractive index of the material.  If we label the vacuum speed of light as

, then the speed of light in a material of refractive index

.  High-energy charged particles can exceed this speed, and therefore produce an “optical boom”.

There is one additional question raised in the preceding discussion: why does the relativistic particle radiate at all?  An aircraft produces sound waves at any velocity; charged particles moving at a constant speed in a material medium, however, only radiate when they exceed the speed of light.

Given that the speed of light in matter is

, we may write the angle at which Čerenkov radiation is emitted as

The cone gets wider corresponding to an increase in either refractive index or particle speed.

This theory of Cerenkov radiation was published in 1937 by Ilya Frank and Igor Tamm4, who eventually shared the Nobel Prize with Cerenkov for the discovery.  It seems that the key piece of the theoretical puzzle was the experiment done by Cerenkov and reported in Physical Review that showed the asymmetry in the radiation pattern; let’s take a look at it.

The experimental apparatus was in fact remarkably simple!  A cylindrical tank of water was surrounded by a conical mirror.  Gamma rays were directed horizontally through the system, producing a cone of Cerenkov radiation that is reflected upwards onto a camera: 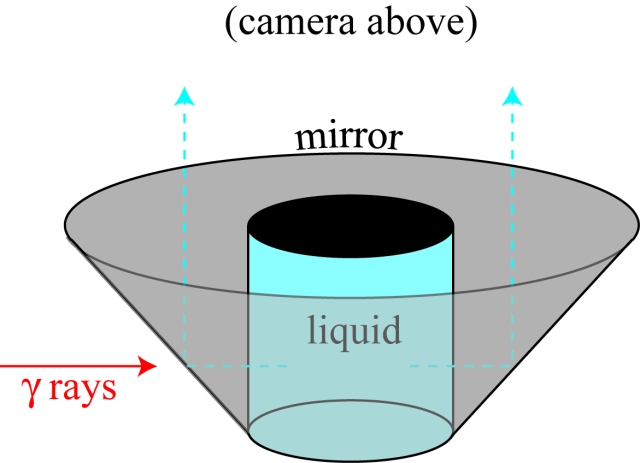 This figure is a “3-D-ized” version of Cerenkov’s original diagram.  One thing that immediately stands out is the use of gamma (γ) rays as the radiation.  This seems at first glance odd, because gamma rays are high energy photons (electromagnetic particles) that travel at the speed of light and possess no charge, and cannot themselves produce Cerenkov radiation.

When the gamma rays enter the liquid, they interact with atoms via the process of Compton scattering.  In essence, gammas collide with atomic electrons, dumping a bunch of their energy into the electrons and kicking them out of their host atoms at relativistic speeds:

These fast-moving Compton electrons then undergo the process of Cerenkov emission. In fact, the original fortuitous observations by Cerenkov of his eponymous radiation were made via a gamma source and Compton scattering.

It would superficially seem more efficient to use a pure beam of beta particles (electrons) as a radiation source rather than relying on the production of secondary Compton electrons.  Cerenkov does not explain his choice of source, but there are a number of reasons why gammas would work better.  First and foremost is the reality that beta particles tend to have weak penetration in matter; this means that a large number of electrons could have been lost simply on passing through the mirror and the glass of the liquid chamber.  Also, even if they penetrate into the liquid, they will lose energy rapidly on propagation.  One would expect more Cerenkov radiation to be produced on the near side of the tank than the far side of the tank, and this could produce a fake asymmetry in the radiation pattern.  The gamma rays would produce Compton electrons more or less uniformly along their path through the liquid, meaning that any asymmetry observed can be attributed to the properties of Cerenkov radiation.  Finally, Cerenkov may simply not have had access to a good source of beta radiation.

So what did Cerenkov see?  The photo published in the article, looking top down upon the experiment, is below. 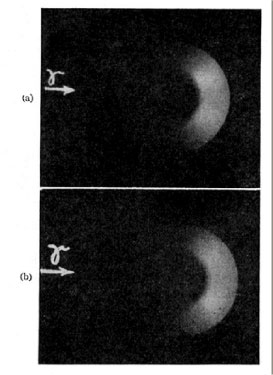 Reprinted Fig. 2 with permission from P.A. Cerenkov, “Visible radiation produced by electrons moving in a medium with velocities exceeding that of light,” Phys. Rev. 52 (1937), 378.  Copyright 2010 by the American Physical Society.

Part (a) of the figure shows the image when the liquid is water,

, and part (b) shows the image for benezene, for which

.  The most obvious feature of the figures is the asymmetry of radiation: the Cerenkov light only appears along the direction of propagation.  This is completely distinct from the behavior of ordinary luminescence, in which one would see a complete ring of light radiating in all directions.

It is tempting to imagine the curve of the image represents the Cerenkov “shock cone”, but it just an artifact of the conical mirror.  The actual cone results in the two (hard to see) bright spots in each image; the bright spots are the vertical edges of the cone.  As predicted by the equation for

above, the width of the cone increases with increasing refractive index.

The spots are hard to see; this is in part due to the fact that the electrons produced in Compton scattering have a range of velocities, and hence a range of cone angles, producing diffuse spots.  They are also hard to see due to the faintness of the light; the images shown required 72 hours of continuous exposure!

The Cerenkov effect has found great use in high energy physics experiments, in which it is crucial to be able to account for all of the energy of the interaction.  A measurement of the opening angle

It was in high energy physics that my own personal interest in Cerenkov radiation, and the history of science, began.  I was an undergraduate in a lab processing crystals for a new detector to be installed at Fermilab.  The topic of Cerenkov radiation came up while a classmate and I were talking with our supervisor, and it dawned on us that we didn’t know what Cerenkov radiation is!  This was in the days before there was any sort of internet to gather information from, so my classmate did what now seems like an obvious thing — he went and got Cerenkov’s original paper from the library!

We didn’t really understand the paper at all, but nevertheless the experience was an eye opener for me.  As an undergraduate, I had grown accustomed to learning about classic physics by reading modern textbooks — strange as it seems in hindsight, it hadn’t occurred to me up to that point that I could go back and read accounts of the discoveries from their originators!

This is really one of the great things about becoming a scientist — we can go back and walk in the footsteps of those giants who came before us, and see what research had motivated them, how they solved problems, and what questions really intrigued them!  Though my interest in the history of science would go dormant again until well into graduate school, my first exposure to Cerenkov’s paper stayed with me and helped motivate me to start and maintain my own history of science blogging and The Giant’s Shoulders blog carnival.

The paper discussed in this post: P.A. Čerenkov, “Visible radiation produced by electrons moving in a medium with velocities exceeding that of light,” Phys. Rev. 52 (1937), 378.

Legal notice related to the reprinting of Fig. 2 from the paper: “Readers may view, browse, and/or download material for temporary copying purposes only, provided these uses are for noncommercial personal purposes. Except as provided by law, this material may not be further reproduced, distributed, transmitted, modified, adapted, performed, displayed, published, or sold in whole or part, without prior written permission from the American Physical Society.”